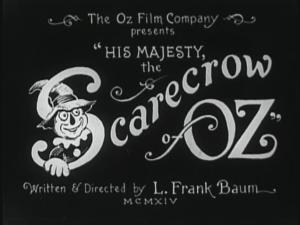 This third film by the Oz Film Manufacturing Company is the closest they ever came to producing a silent version of “The Wizard of Oz.” Strangely, what’s missing is a lot of the plot motivation – most of the characters lack the clear goals we are familiar with from the 1939 version, and so much of the story just involves people wandering around an enchanted wood for no apparent reason. It reminded me somewhat of Shakespeare’s “A Midsummer Night’s Dream” for that reason, and also because various people fall in love with the wrong person or are turned into animals. We do get Dorothy (played by Violent MacMillan, who finally got to be a girl for once), the Tin Man (Pierre Couderc, who had been the Patchwork Girl), the Cowardly Lion (Fred Woodward, who also turns up in his familiar mule costume), the Wizard himself, a witch called Mombi, and, of course, the Scarecrow. The Lion was also odd, because he never seemed very cowardly to me charging at cavalry brigades, storming castles and so forth, although he failed to climb a ladder, so maybe he’s afraid of heights. The title is basically a spoiler for the end of the film, and again we get various creative Méliès-style effects and magical creatures dancing and pantomiming along the way. 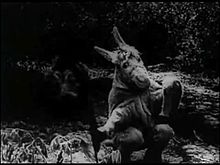 Due to the box office failure of “Patchwork Girl of Oz,” this movie lost its distribution deal from Paramount Pictures and was only released, in modified form, in 1917. I suppose that should disqualify it from nomination for any Century Awards, but I don’t feel I have to be as picky as the Academy is. It does seem somewhat less effective to me, in that where “Patchwork Girl” was accessible to small children by having few intertitles and clear on-screen action, this movie had a lot of intertitles, and would require an adult or older child to explain it to a pre-literate child. Another interesting difference is that “Patchwork Girl” was divided into several discrete “parts” or chapters, while this is one continuous storyline. Again, Violet MacMillan returns in the role of a boy, this time one who is randomly chosen as king of “Noland,” a city which is assaulted by Rolly Rogues and by the witch-queen Zixi. Fortunately his (or her) sister, played by Mildred Harris (who later worked with Griffith on his remake of “Enoch Arden” and “Intolerance”) has inherited a magic cloak from the fairies. Also fortunately, their loyal mule Nickodemus gathers an effective fighting force from the animals of the forest and does most of the magic cloak’s work for it. 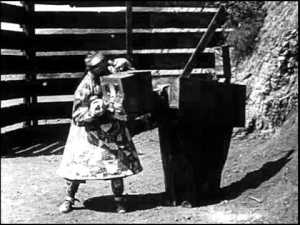 Twenty five years before Judy Garland, L. Frank Baum himself was involved in the production of several “Oz” films, through a company called “The Oz Film Manufacturing Company.” Although the movies were not successful, Baum must be seen as smart to try to cash in on the new medium, at a time when producers were eagerly grabbing up (or stealing) written content to serve as storylines. This was the first of his books the company adapted, and it relies on pantomime and slapstick, and a few Méliès-style special effects, to create the atmosphere of his imaginary kingdom. There are few intertitles, but we do get camera movement and intercutting between scenes. The “girl” of the title is played by a man (French acrobat Pierre Couderc), while the main Munchkin “boy” is played by an adult woman (Violet MacMillan, who made her name as the “Cinderella Girl” for having children’s size 11 feet). There is other gender-bending in the cast as well, and all the gender-identified women fall in love with a miniature statue of one of the only males played by a man who is neither old nor deformed. Harold Lloyd and Hal Roach, who went on to make many great comedies together, met on this film, each of them in the ethnic-caricature role of a “Tottenhot.” Ozma of Oz, the Scarecrow, and the Tin Man all make appearances near the end.