With some sadness, I return once more to the work of Evgeni Bauer, who I discovered early in the first year of this project. This movie, which was one of the last he made, will likely be the last one I will review – unless I discover one I hadn’t known was available, or unless new discoveries are made in Russia. 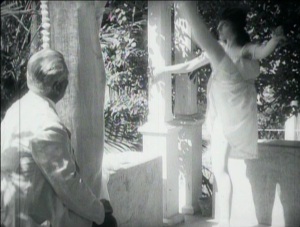 The movie begins with a somewhat somber “meet cute,” in which a young man (Vitold Polonski) looking for a lost dog asks a young woman (Vera Karalli) if she has seen it. She turns away and does not answer, but her father (Aleksandr Kheruvimov) comes over and explains that she is mute. The young couple are introduced as Gizella and Viktor, but they make no further contact at this time. Later, we learn that Gizella is a dancer, and that her “soul” is dancing, but she is deeply sad that she couldn’t speak to the young man. They soon see one another again on a forest path while she is picking flowers and he is out for a walk. When she sees him, she stumbles and falls, turning an ankle. He helps her back to her house, thus learning where she lives. END_OF_DOCUMENT_TOKEN_TO_BE_REPLACED 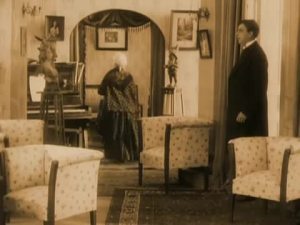 After seeing this, I feel I was entirely too faint in my praise of Evgeni Bauer in my review of “Twilight of a Woman’s Soul.” He was not simply a genius of Russian cinema, but of world cinema. His movies are technically years ahead of anyone else working at the time, including D..W. Griffith – watching them I feel like I’ve skipped ahead to the early 1920s. In this one, he not only uses pans and simple tracking shots, but close-ups, reversals, and edits to suggest the broader world the characters move in. Nothing feels like it is confined to a “stage” by the camera, and the angles and compositions he chooses prevents this even more by giving depth to every scene. The story is an improvement, it is based on a Turgenev story of unrequited love and tragic suicide, and the main character, an introverted young man, made me think of the heroes of Poe or even Lovecraft. Ultimately, it is his inability to express emotions or connect with other people that leads to the horror of this story, and I would argue that it is a horror movie, even though nothing more supernatural than dreams and hallucinations takes place. Years before “The Cabinet of Dr. Caligari,” madness was used to chilling effect in this movie, happily still viewable a century later.