The clothing we wear affects how others see us and how we see ourselves. An actor’s body language and character can be directly influenced by their outfit, and time periods are established for the audience at least as much through clothing as through scenery. The movies selected for this year’s award for costume design all reflect the importance of this art to the motion pictures.

In “Trilby,” a bohemian subculture is established through clothing, and the development of the main character is shown through her wardrobe changes. In the “Les Vampires” episode called “The Deadly Ring” exotic costumes contrast with the day-to-day norms of Parisian culture. Theda Bara got to display some of the hottest fashions of 1915 in “A Fool There Was.” The Civil War era comes alive in the costumes of “The Coward.” And, although it is remembered today for the innovation of female nudity, the diverse costumes of Lois Weber’s “Hypocrites” help establish the archetypal nature of its characters.

The nominees for Best Costume Design of 1915 are…

And the winner is…”The Deadly Ring!” 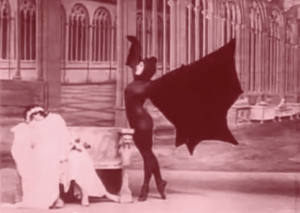 As with last year, when I gave the award to Chaplin’s “Little Tramp” outfit, again I chose what must be seen as one of the most iconic images of 1915 cinema, the famous bat-suit worn by Stacia Naperkowska for her brief and fatal dance sequence. While the other costumes in this movie owe a great deal to its “Fantômas” predecessor, the glamorous evening clothes of Jean Ayme and the Grand Inquisitor’s understated but official costume also earn a mention.

For my “feature” this week, I’m returning to the series “Les Vampires” by Louis Feuillade, a crime-drama that served as his follow up to “Fantômas.” I’m a bit embarrassed to call it a “feature,” though, given its short running time. I’ not certain whether the relative brevity of the chapters in “Les Vampires” versus “Fantômas” was a result of budget cuts due to the curtailing of the French film industry during the First World War, or whether these were artistic decisions made by Feuillade. Since this episode and the previous one were apparently released on the same day, it could be that they were meant to be shown together.

At any rate, the movie does have quite a bit to it, given the time it takes to watch. It opens on an exclusive Paris gentleman’s club, wherein a Count Noirmoutier (Jean Aymé) reads in the paper about the relationship between the heroic newspaperman Guérande (Édouard Mathé) and a ballet star named Marfa Koutiloff (Stacia Napierkowska). He then purchases a ring from a nervous fellow who warns him that one scratch from it could be deadly. Then the count heads over to Marfa’s dressing room, where she is being interviewed by Guérande and dressed by her maid. Guérande discreetly leaves and the count offers her the ring “as a token of my affection…with honorable intentions…and absolute respect.” Marfa agrees, and insists he put it on her finger, which he does a bit forcefully. Once he leaves, she complains that her finger is hurt and removes it. Then her curtain call comes and she rushes out to the stage, after donning huge batwings. Her dance as the enormous bat is one of the most iconic images of the film, but it doesn’t last long before she collapses from the poison o the ring. Guérande notices the count fleeing the scene and suddenly recognizes him as Dr. Nox (why didn’t he know him in the dressing room? Never mind.) 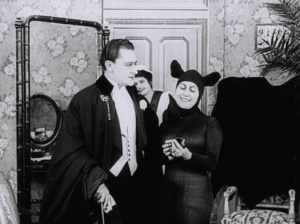 If this gig doesn’t work out, maybe they’re hiring at Disney.

The second act of this episode begins with Guérande pursuing Nox in a taxicab, only to be seized by a gang of Vampires in their Fantômas-like costumes. He is then taken to a secret hideout where orders are passed along from the Grand Vampire that he is to be held there until the Grand Inquisitor comes to interrogate him at midnight. At dawn, he will be executed before the Black Council. The loyal Vampire who is left to guard him quickly becomes overheated in his costume and removes his mask. It is Mazamette (Marcel Lévesque), Guérande’s co-worker from the previous episode! Now that he has a “man on the inside” as it were, things start looking up for Guérande. He has Mazamette undo his bonds, and attempts to flee. However, the door is bolted from outside. So, they wait until the Grand Inquisitor shows up and jump him, putting a hood on him and leaving him in Guérande’s place. The next morning, the Black Council arrives to witness the deed, but before they can start, there is a police raid, led by Guérande, who wants to catch the Grand Vampire. However, they all know a secret way out, and they shoot the Grand Inquisitor before they go. The police unmask the dead man and find that it is a prominent judge of the Supreme Court. Fortunately, the Vampires now think they have assassinated Guérande, so he can continue to investigate them without fear of reprisal. 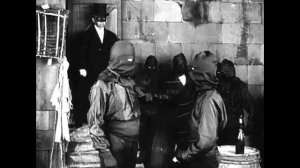 This is a fun episode, but again, somewhat less exciting than the Fantômas movies. At first, when Marfa was introduced as Guérande’s fiancée, I thought maybe we were starting to overcome some of his milksop tendencies from the previous episode, but apparently she’s just a “beard.” Anyway, so far as we know at this point, she’s dead, so the point is moot. One thing I don’t think I’ve mentioned before is that the artist Edward Gorey referred to Feuillade as one of his major influences, especially in the book Ascending Peculiarity. That Vampire Dance sequence was one of the first times I really sensed this influence in watching a Feuillade film – perhaps because the detailed backdrop looked like a background to a Gorey drawing. There’s a closeup when Marfa begins to falter in her dance, but in general the camera is fairly static and most of the story is shown in long- to mid-shot. I rather liked the touch that the reason for assembling the Black Council was to implicate all of the gang leaders in the murder together, so that no one would be “clean” should anyone try to betray the rest. Criminals just don’t go in for elaborate schemes like that in the movies anymore.