This lightweight Western short was evidently intended for children and unsophisticated audiences (the bad guy even wears  black hat!), but it works well enough for the time it was made. It was directed by and stars Tom Mix, one of the biggest Western stars of the silent era.

The movie begins by establishing that Tom Warner (Mix) is rivals with “Mexican Joe” (Pat Chrisman) for the affections of Jean Dixon (Louella Maxam). Jean and Tom are on a date out on the range, and Warner goes to a creek to get Jean some water when Joe rides up. He’s kitted out in Mexican finery, and wears a gun (Tom does not). He immediately starts harassing Jean, insisting that she come with him and Tom runs back over and punches him, sending him packing. Next, it is established that Tom is a sheep farmer in cattle country by showing scenes of Tom nursing a baby sheep with a bottle. Jean’s father, Thomas Dixon (William Brunton), gets together with a bunch of other cattle ranchers to write Tom a note saying he needs to stop raising sheep, or else. He responds by asking Jean to meet him at the corral, which angers Mr. Dixon still more. He meets up with Jean, they exchange pleasantries and kiss, and as soon as she’s gone a group of about seven ranchers set upon Tom and tie him up. They ride out to a bluff and tie Tom to the ground, warning him that he’ll stay that way until he agrees to give up sheep farming. The next morning Mexican Joe rides up and slaps Tom in the face now that he’s helpless. Jean comes along and remonstrates with Joe, which results in him kidnapping her. Mr. Dixon now rides out to the bluff to give Tom some food (he’s not heartless) and Tom tells him what’s happened. Mr. Dixon frees Tom and rides off to round up a posse. Tom is able to get to his horse and gallops out to the parson’s, where the Mexican was just minutes away from marrying Jean. He runs as soon as he sees Tom, but Tom lassos him and drags him back to the posse, who take him away. Jean and Tom embrace while Mr. Dixon looks approvingly on, apparently now reconciled to having some sheep on the range.

Just looking at the names in the title credits, I knew who was going to win, even before I noticed that Warner was played by Mix. The movie has no surprises in terms of race, although for half a second I thought Mexican Joe might be decent and free Tom when he found him tied up. I should have known better. The sheep/cattle issue is simplified to a point of being ridiculous, although it seems to have been an excuse to include some cute images of baby sheep, maybe for the littler kids. This is the first Tom Mix movie I’ve reviewed on this blog, I believe, and he lives up to his reputation for providing very simple, super-clean Westerns with action and moral plots. I actually hadn’t known his career started this early, since one usually hears him mentioned in connection with the 1920s, but evidently he worked at Selig from at least 1910 to 1917.

I have not found this movie available for free on the Internet. If you have, please comment.

This is another movie I saw at the Cinecon Film Festival in Hollywood. They did us the special favor of showing both this and the 1930 version with Gary Cooper. I took notes to keep them straight, but Coop’s voice was still in my head whenever I read William Farnum’s subtitles.

The story of “The Spoilers” is the now-hackneyed Western theme of the man-who-lays-down-his-guns-for-the-love-of-a-woman story, which maybe was fresher in 1914. The major twist is that instead of being set in the Southwest in the nineteenth century, it’s in Alaska during the 1898 Gold Rush, which makes it much more topical for an audience who had read about it in the papers just a few years earlier. This version starts with our hero, Roy Glenister (Farnum) breaking up with his girl Cherry Malotte (played by Kathlyn Williams), the classic prostitute-with-a-heart-of-gold – actually she deals cards for a living, but close enough. We then see the “plot to spoil Alaska” being planned in Washington, D.C. by Alex McNamara (Thomas Santschi) as various folks sign documents and shake hands beneath portraits of Abraham Lincoln and George Washington. In connection with the plot, Judge Stillman sends his niece Helen Chester (Bessie Eyton) to Nome with important documents. She meets up with Glenister while trying to escape from the S.S. Ohio, which has been condemned for smallpox. Glenister and his buddy Dextry (Frank Clark) beat up the pursuing sailors so she can climb aboard the Santa Maria. They hide her out in their cabin while they sleep outside, and it’s clear that Helen and Glenister are sweet on each other, but she disapproves of his wild, rough-house ways. END_OF_DOCUMENT_TOKEN_TO_BE_REPLACED 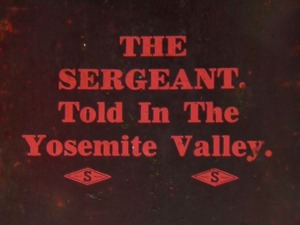 This one-reeler was apparently shot partly in Yosemite Park and partly along the Willamette River in Oregon, though it’s hard to say which parts are which (it’s been speculated that the Merced would have been too cold to swim in, so those parts might be Willamette, but I wouldn’t be certain of it). It tells the story of a romance between a non-commissioned officer and the inevitable colonel’s daughter, and its interruption by an “Indian renegade” who steals their horses and riles up the local tribe against the intruders. It was shot by John Dored, a Latvian cinematographer who went on to become a famous newsreel cameraman. There are a surprising number of pans for a narrative film of the period, either because Dored was an innovator or because the landscape inspired a more panoramic approach. The director, Frank Boggs, is credited with being the first producer of motion pictures to establish a studio in Los Angeles (Selig Polyscope) and was later shot by a disgruntled studio employee. The on-camera action is almost as thrilling as the story of the filmmakers, though, with various shootouts and a daring swim through icy-cold (or not) rapids to try to rescue the girl. The hero of the movie, Hobart Bosworth, was one of the first silent actors to do stuntwork and later claimed to have “fallen down most of” the West.

You can watch clips from it for free: here. I have been unable to locate the entire film online, please comment if you know where to find it.