The movie begins with a classic supervillain-origin-story: a child who has been in an accident is under the care of a young, freshly-minted doctor (Charles Clary), who amputates both his legs beneath the knees. When the doctor’s mentor arrives on the scene, he pronounces the amputations unnecessary, and the child learns of his disfigurement by overhearing them, then witnesses both doctors lying to his parents to cover up the mistake. Thus are the seeds of insanity sown. The boy grows up to become known as “Blizzard,” the chief of the criminal underworld in San Francisco. We first see him in his new role after a goon named Frisco Pete (Jim Mason) kills a streetwalker called Barbary Nell (Doris Pawn) in a dance hall. Pete runs back to Blizzard’s hideout and beat cops wisely choose to look the other way when they realize who is behind it. We learn that Nell has “wandered” from Blizzard’s gang, perhaps because for some strange reason he has put all of his girls to work in a sweatshop making hats. END_OF_DOCUMENT_TOKEN_TO_BE_REPLACED

This animated short from Bray Productions features Jerry Flannigan, known to readers of the Hearst Newspapers as “Jerry on the Job.” He is a diminutive fellow who works a variety of jobs, although his employment is a pretty minor aspect of this film. 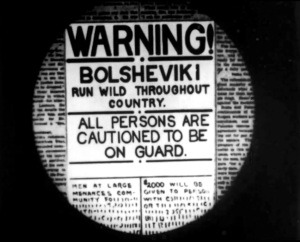 Jerry and his boss are at a railroad station, reading the paper. They see a headline screaming “BOLSHEVIKI RUN WILD THROUGHOUT THE COUNTRY” and become highly paranoid. When a mustachioed man walk up holding a large black sphere, they become fearful and try to hide, but everywhere they go, he seems to follow, polishing his “bomb.” Finally, they run into town and arouse several other citizens and a police officer to come out and investigate. The team sees the man lighting a match, but really he’s just lighting his pipe. He gets ready to throw the bomb and tries to knock over several bowling pins, but the ball misses and he has to use his pipe to get a “strike.” At that moment, the lynch mob confronts him with a gun, and he holds up his hands, causing his coveralls to fall off and reveal several bowling medals pinned to his chest. He runs off, leaving his clothing behind and the other lynchers turn on Jerry and his boss, initiating the traditional cartoon “fight cloud.” When the dust clears, it appears that Jerry and his boss have been torn to shreds, and the other men leave. Finally, the heads of Jerry and his boss poke out from the ground, with two black eyes each, but they are still alive. Oddly, in the final shot they kiss each other on the mouth.

What surprised me most about this cartoon was the direct political reference, but particularly in the context of red-baiting newspapers. The comic’s original host, the Hearst line of papers had been responsible for some of the worst red-baiting of the postwar period, and here was a cartoon apparently lampooning that with their character! The movie suggests that people should not jump to conclusions, and that violence can be fueled by irresponsible journalism. Of course, it’s all in the service of a laugh, and apparently meant for children who probably wouldn’t read that level of criticism into it. It was also interesting to see the early use of a dust cloud to simulate fighting in cartoons, something I remember from my childhood of cartoon-watching.

I have not been able to find this movie for free on the Internet. If you do, please comment.

We’re half a month in already, and most of my Century News for the month falls in the first half of June! Let’s see how things were going in the world a hundred years ago. Looking at headlines from back then can put today’s “crises” into perspective.

German trench during the Battle of Messines

Conscription begins in the United States on June 5.

The Battle of Messines opens June 7 with the British Army detonating 19 ammonal mines under the German lines, killing 10,000 in the deadliest deliberate non-nuclear man-made explosion in history.

A fire at the Granite Mountain and Speculator ore mine outside Butte, Montana kills at least 168 workers on June 8.

King Constantine I of Greece abdicates for the first time on June 11, being succeeded by his son Alexander. He will return briefly in 1920-1922.

The United States enacts the Espionage Act on June 15. Although intended to prevent sabotage during wartime, the act will be used during the post-war “Red Scare” to justify persecution of radicals and labor organizers. 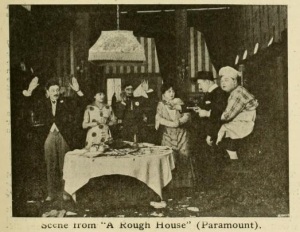 On June 25, “A Kentucky Cinderella” starring Ruth Clifford is released.

Also on June 25, “The Rough House” with Roscoe “Fatty” Arbuckle and Buster Keaton is released.