This is my contribution to the Classic Movie History Project Blogathon, sponsored by Flicker Alley and hosted by Movies Silently, Silver Screenings, and Once Upon a Screen. As it happens, our sponsor Flicker Alley offers a DVD with this movie and “Young Romance,” which I reviewed last week on it. For those who want to see it for free, here is the Worldcat link for that DVD in libraries throughout the world: http://www.worldcat.org/oclc/50865456

Urban criminals have been part of cinema at least since “The Bold Bank Robbery” and “Capture of the ‘Yegg’ Bank Robbers” – both follow-ups to Edwin S. Porter’s smash hit “The Great Train Robbery.” Many of the tropes now familiar to the genre were established when D.W. Griffith made “The Musketeers of Pig Alley.” Raoul Walsh, who learned filmmaking from working for Griffith, returned to the theme for his first feature, “Regeneration,” and in doing so quite probably made the first feature-length gangster movie. The similarities between “Musketeers” and “Regeneration” are pronounced – both involve the redemption of tough guys who’ve grown up in a harsh environment, and both emphasize the human side of the underworld, drawing on the audience’s desire to sympathize with the criminal.

This movie may confuse modern fans, however, because rather than spending the bulk of its length depicting its protagonist’s criminal career, it chooses to focus on his efforts to rehabilitate himself (his “regeneration”). This can partly be explained by the source material, a book called My Mamie Rose, by Owen Frawley Kildare. This book is a fairly typical “conversion narrative” from the point of view of a former hoodlum gone straight, who wanted to tell of “the miracle that transformed me.” Unlike most such narratives, it isn’t Jesus Christ or a particular church that Kildare credits with his salvation, but the love of a woman named Marie Deering. The real Marie Deering died of pneumonia in 1903, the same year Kildare wrote his autobiography. It was popular, especially among reform-minded progressives, who held Kildare up as an example of the basic decency inside of every criminal, and gave rise to a stage version by 1908. In 1915, William Fox, a successful Nickelodeon entrepreneur who was breaking into movie production (read up on Fox at Once Upon A Screen’s contribution to the blogathon), bought the movie rights and handed the direction to Raoul Walsh. 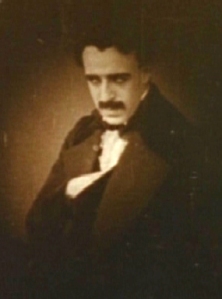 Walsh was just starting out his career at this time, and no doubt jumped at the chance to direct the movie version of a popular book. He had worked with Griffith on a number of short films, and was also familiar to movie audiences as an actor. He had played the role of John Wilkes Booth in Griffith’s runaway hit “The Birth of a Nation” (in what I consider to be one of the most palatable scenes in that movie). Now he would take on the challenge of a feature length film with a guaranteed audience among the book’s fans. Fox was a holdout for making movies on the East Coast at a time when much production was moving West, but no doubt the gritty locations of New York strengthened this movie’s impact. 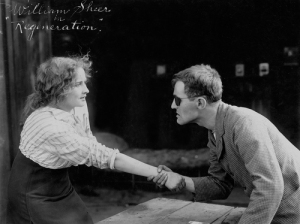 Regeneration opens in the Bowery area of New York city, with a casket being loaded onto a hearse. This is the body of the mother of our hero, called Owen Conway in this version, and played by Rockliffe Fellows (later in “Rusty Rides Alone” and “Monkey Business” with the Marx Brothers). Or, at least he will be, once he’s done growing out of a series of child actors. He’s taken in by the neighbors, who use him as child labor and an occasional punching bag. Owen and his “family” wear some of the rattiest clothes you’ll ever see on film, and the surroundings are consistently grimy, and random extras in the area are deformed or ugly. This is not a nice childhood. By the time he’s twenty five, and has transformed into Fellowes, he’s the leader of a gang, by virtue of his strength and cunning, and his adherence to the codes of the street.

Now into the story comes an ambitious young District Attorney, played by Carl Harbaugh (also in Walsh’s lost version of “Carmen” and “Steamboat Bill, Jr.” with Buster Keaton), who has vowed to clean up crime in the city. His dinner party includes young social butterfly Marie Deering (Anna Q. Nilsson, a Swedish actress, who went on to “Seven Keys to Baldpate” and “Sunset Boulevard“), who, at this stage in her development, thinks that seeing some real live gangsters would be exciting, so he takes them all out to a low-class nightclub/beer hall/vaudeville, where he is rapidly recognized and assaulted by the patrons. Owen watches this all, at first with disinterest, but, after he notices the girl, he steps in and breaks up the fight, saving the slumming socialites from the consequences of their actions. Deering is now convinced that the people living in the tenements need someone to show them the way out of poverty and hardship, and volunteers to work at a local mission, where (of course) she runs into Owen again. Owen starts coming around to the mission more, and disassociates himself from his old gang.

A thrilling scene takes place about midway through the film when Deering takes her charges on an outing on the ferry (where are they going, Staten Island? Not that uplifting, if you ask me, but maybe things were different then). Skinny, one of Owen’s old gang, comes along for the ride and carelessly starts a fire when he throws his cigarette into some rope. The burning ferry becomes a smaller version of the Titanic, with panicked passengers hurling themselves into the drink. Owen manages to save some kids, and the intertitles tell us that no children were killed during the disaster. Years later, Walsh told a humorous anecdote about this scene – that several of the women actors who lept from the ferry had no underwear on, and he and the editor had to draw them onto the film in post-production, due to the way their skirts flew up when jumping into the water. It’s a cute story, but not likely, since the long shot he uses here doesn’t allow the eye to catch that level of detail. 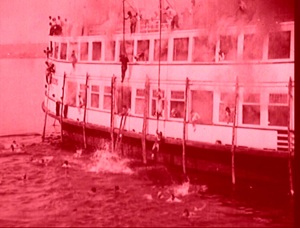 Of course, Owen’s old life catches up with him, first, because the D.A. (who is not at all a likeable character, even if he does represent the forces of law and order) is still hoping to get Deering off the charity kick so she’ll marry him, and starts to snoop around to find out about this young punk who shows such an interest in her, and partly because his old colleague Skinny knifes a cop and comes running to him for hiding. It’s the last portion of the movie in which we get all the violence and excitement we expect in a gangster movie, with cops raiding the gangsters’ hangout, nightsticks thrown, guns blazing, and Skinny threatening to do goodness-knows-what after he’s kidnapped Marie. There’s also a marvelous stunt when Skinny tries to escape his fate by hand-over-handing his way across a laundry line tied between two towering tenement buildings. I don’t usually worry overmuch about “spoilers,” but in this case I think the ending is worth preserving – it has elements of redemption but also tragedy.

Sorry, hipsters, this is what a beer growler really looks like.

Narratively, this movie has a lot in common with the Western genre. It’s very easy to imagine the same story told in California or Arizona: A man is redeemed from his savage, masculine life by the love of a more civilized woman, but has to return to his natural skills when her life and honor are threatened by the forces of his former world. Stylistically, it is very much of the more “advanced” kind of feature we’re getting used to here at the second half of 1915. There is good use of close-ups, lots of different camera angles, cross-cutting, iris shots, zooms, and a generally “freer” camera, that doesn’t feel as locked down as most of the movies of a year or more before. I also noticed a very sophisticated approach to intertitles: where they used to come before the action they described, now they often interrupt and action or explain it right after the fact. There’s also some great depictions of New York’s Bowery district nearly six decades before CBGB and the Ramones made it a playground for kids like me. Note especially the “growlers” (actually dented metal pails) of beer the residents prefer to drink from. The movie has wonderful style and is emotional evocative, even 100 years later. Reviews at the time emphasized its realism and humanity, and John McCarty, writing in Bullets over Hollywood, noted the debt that Marlon Brando’s character and performance in “On the Waterfront” owed to this movie and its spirit of redemption within a world of crime. Folks who enjoy gangster films will find it more than a curiosity.

I have not found it for free to watch on the Internet. If you do, please post a link in the comments.