This early biopic stars its subject Babe Ruth but completely fictionalizes his life to create a down-home American narrative surrounding a life which might not have fit into accepted American mythology at the time. The result is somewhat odd, but at times quite amusing.

The movie opens, after a jokey intertitle, by showing a throng of baseball fans piling into a ball park (most likely the Polo Grounds, where Ruth worked at the time). They are nearly all men, and nearly all wearing identical straw hats – obviously a major fashion accessory of the day. We see the New York Yankees come out of their dressing rooms and a close up of Ruth in the dugout, then a ballgame and the crowd is shot from a few different angles. Suddenly, one of the fans is introduced as “an oldtimer from Babe’s birthplace, Haverlock.” Haverlock, it seems, is a small rural community somewhere in “the sticks” (it’s never really clear where, but the town has sort of an East Coast look that made me think of upstate New York). We are then transported to this rustic hamlet, where Babe evidently lived with his single mother (Margaret Seddon) and small foster sister (Frances Victory). Ruth is shown hacking down a small tree in the woods with the intention of making himself a baseball bat. Other town members are introduced, each with a funny and often misspelled intertitle, including the local banker (James Marcus), his son (Ralf Harolde) and daughter (Ruth Taylor), who is Ruth’s love interest Mildred. “Si,” the banker (short for “Cyrus”) kicks his son out of the house for running up debts and the son goes off to New York. We also meet Ruth’s rivals, who include the local dogcatcher (George Halpin) and Harry Knight (William Sheer), the man Cyrus brings in to work at the bank and to pitch for the local ball team, run by the drunken town barber (Walter Lawrence). 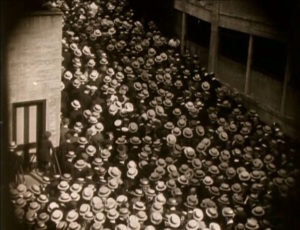