This German feature film directed by Paul Wegener enters our History of Horror among the first movies modern fans easily recognize as “really” a horror movie. But its place in history remains disputed, with many possible interpretations available, so let’s take a closer look. 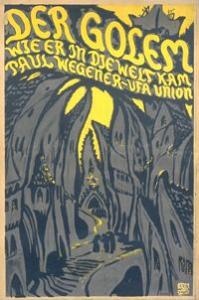 The movie begins with a shot of a starry sky above gnarled rooftops, with seven stars in a strange over-lapping configuration. We cut to an old man atop one of those rooftops, peering through a telescope and learn in an intetitle that he is Rabbi Loew (Albert Steinrück), and that he sees bad days ahead for the Jews of Prague in the stars. Close-ups then introduce us to his household – an assistant named Famulus (Ernst Deutsch) and a daughter named Miriam (Lyda Salmonova, in reality the wife of Wegener). These two are both young adults, and they gently flirt as they assist on some alchemical experiment or other. Rabbi Loew interrupts to tell them of his prophecy, then he puts on a tall peaked hat and goes out to inform the other elders of the Ghetto. He advises them to begin a 24-hour vigil of prayer to avert coming disaster. Since he’s a  respected rabbi, the community elders follow is advice.

END_OF_DOCUMENT_TOKEN_TO_BE_REPLACED

Coming early in the careers of Ernst Lubitsch and Pola Negri, this filmed version of the famous novella/opera gave them an opportunity to work with “serious” cultural material. Does this European interpretation of the story work better than its American predecessors?

The movie opens with a group of gypsies sitting around a campfire at night. One of them launches into the story of “La Carmencita” and the man she ruined. We now see Don Jose (played by Harry Liedke), who visits his mother and sweetheart in the hills before he arrives in Seville to receive a promotion to the rank of Sergeant. This is a great honor for a man of humble beginnings. We can see from his shy interactions with his fiancé that he has little knowledge of the ways of the world. At Seville, we see a parade at the changing of the guard, which seems to be a big draw for crowds, including the girls at the local tobacco factory, who wave at the soldiers and flirt with men on the street. The most beautiful, and aggressive, is of course Carmen (Negri). She sees Don Jose mooning over a letter from his sweetheart and resolves to have some fun with him. She teases him with a rose, which he mostly ignores until she leaves, then notices how marvelously sweet the odor is once she’s gone. END_OF_DOCUMENT_TOKEN_TO_BE_REPLACED

Another Ernst Lubitsch sex comedy starring Ossi Oswalda, this one is a bit less transgressive than “I Don’t Want to Be a Man,” but still racy by the standards of the time, especially compared to American comedies. Lubitsch again shows the talent he will be bringing to movies for some time to come. 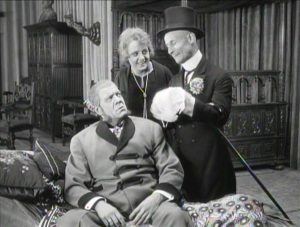 Ossi this time plays Ossi Quaker, the daughter of an American magnate (Victor Janson) who has made his fortune selling oysters. She seems to delight in destroying things, throwing newspapers when she runs out of vases to break. When Victor asks what the matter is this time, he finds it’s because the daughter of the “Shoe Cream King” is marrying a count. Of course, she demands better, so Mr. Quaker agrees to find her a prince. He goes to a matchmaker (Max Kronert) who looks in his files and discovers a confirmed bachelor by the name of Prince Nucki (Harry Liedke) and sends him an invitation to meet the Quakers. The reticent Nucki, on receiving this note in his bachelor pad, sends his buddy Josef (Julius Falkenstein) to scope out the girl in question, setting him up to play his valet. Meanwhile, Ossi is “instructed” in married life by practicing with a baby doll.