The movie begins with a classic supervillain-origin-story: a child who has been in an accident is under the care of a young, freshly-minted doctor (Charles Clary), who amputates both his legs beneath the knees. When the doctor’s mentor arrives on the scene, he pronounces the amputations unnecessary, and the child learns of his disfigurement by overhearing them, then witnesses both doctors lying to his parents to cover up the mistake. Thus are the seeds of insanity sown. The boy grows up to become known as “Blizzard,” the chief of the criminal underworld in San Francisco. We first see him in his new role after a goon named Frisco Pete (Jim Mason) kills a streetwalker called Barbary Nell (Doris Pawn) in a dance hall. Pete runs back to Blizzard’s hideout and beat cops wisely choose to look the other way when they realize who is behind it. We learn that Nell has “wandered” from Blizzard’s gang, perhaps because for some strange reason he has put all of his girls to work in a sweatshop making hats. END_OF_DOCUMENT_TOKEN_TO_BE_REPLACED

One of Mary Pickford’s most successful features at the time, this was directed by Maurice Tourneur – or, perhaps, co-directed by him, given the power Mary wielded on the set – and written by her friend Frances Marion. It’s probably not her most accessible movie today, for reasons I’ll discuss below, but it’s a valuable insight into what made her a superstar for her era.

The movie starts out by introducing its title character, 10-year-old Gwendolyn, played by Pickford (I’ll address that later, just accept it for now). It is immediately established that she is “rich” in wealth, but “poor” in love. Her parents neglect her and leave her with unsympathetic and strict servants in charge. The scene is set for us with highly stylized intertitles that show a small girl in an enormous room, with toys but no companions. Then Gwen comes skipping onto the scene, only to be confronted by two stern-looking butlers. She sees some children skating outside the window and smiles happily, but a servant comes over to slam it down. She begs her mother (Madlaine Traverse) to give her a minute, but her mother is rushing off somewhere and says maybe they can talk to-morrow. Gwen asks, “Why is it that my to-morrows never come?” 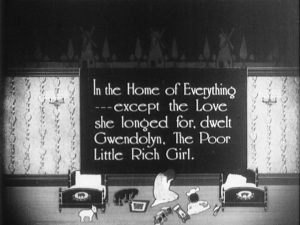