The movie begins with a classic supervillain-origin-story: a child who has been in an accident is under the care of a young, freshly-minted doctor (Charles Clary), who amputates both his legs beneath the knees. When the doctor’s mentor arrives on the scene, he pronounces the amputations unnecessary, and the child learns of his disfigurement by overhearing them, then witnesses both doctors lying to his parents to cover up the mistake. Thus are the seeds of insanity sown. The boy grows up to become known as “Blizzard,” the chief of the criminal underworld in San Francisco. We first see him in his new role after a goon named Frisco Pete (Jim Mason) kills a streetwalker called Barbary Nell (Doris Pawn) in a dance hall. Pete runs back to Blizzard’s hideout and beat cops wisely choose to look the other way when they realize who is behind it. We learn that Nell has “wandered” from Blizzard’s gang, perhaps because for some strange reason he has put all of his girls to work in a sweatshop making hats. END_OF_DOCUMENT_TOKEN_TO_BE_REPLACED

This short film stars Lon Chaney early in his career, and even shows of a little of his talents with makeup, for which he would later become famous. I was able to attend a rare screening at Cinecon, and so can now review the film, long thought lost and rediscovered in 2008. Note, as always in these cases, that the plot summary is based on my memory of a single viewing, and may be flawed. 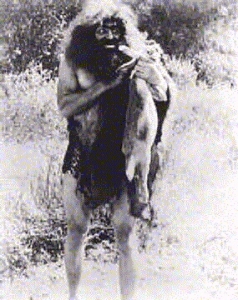 The movie is a metaphorical statement on human relationships, using cavemen to represent the instinctive drives. It opens by showing a classic love-triangle in caveman form. Lon Chaney is “The Lion,” a brute who shoos off “the Lamb” (Gus Inglis) and claims “the Woman” (Pauline Bush) by brute force. Now, a new character, named “the Fox” (Millard K. Wilson) sneaks through the bushes and fires an arrow from a bow, killing the Lion, and claiming the woman for himself. This is followed by a transition to modern times.

It begins by establishing Chaney once again as the Lion, showing him in a brawl with another man, winning by brute force. At the riverside, we see a sequence in which the modern Lion takes the Woman away from the Lamb through force and the Fox attempts to defeat the Lion through ingenuity (this time setting a trap by attaching a string to a rifle). During this, there are superimposed images of the cavemen characters to drive home the point. When the Lion fails to trip the trap, the Fox runs away with the Lion in pursuit, leaving the Woman (who seems rather relieved) to her own devices. She takes off her stockings and begins to wade into the water, but accidentally drops one. She tries to reach it before it floats away, and winds up falling into the river herself. Now we see the Man (William C. Dowlan), who is fishing downstream. He feels a tug at his line and reels it in, discovering the stocking. Now the Woman appears behind the rock he is sitting on, and she tries to stealthily swipe the stocking, but the Man sees her. They playfully flirt and leave together.

The final sequence shows the outcome of the various paths. The Lamb, now an elderly minister, sits among a group of spinsters sipping tea. The Fox and the Lion are together, living in poverty with a very ugly Indian woman (with a mustache) as their mutual companion. The Man and the Woman live in middle-class wedded bliss, their child running about happily as another minister comes over to visit.

This was a pretty basic little movie, rather simple for 1914, but interesting in terms of effects and the ambition of the storytelling. Essentially, it appears to argue that where brute strength and cunning were enough in the struggle for survival in “nature,” civilization benefits the person capable of empathy and understanding. It seems to me that this case would have been stronger if the Man had jumped in to save the Woman from drowning, especially if it was made clear that none of the other characters would risk their lives for her, but possibly this was beyond the capacity (or budget) of the filmmakers, or maybe I’m reading it wrong somehow. Chaney is impressive in his makeup (the woman presenting the next film commented “Wow, who knew Lon Chaney was so buff?”), and I wouldn’t be surprised if he also made up the other actors in their caveman and aged appearances (and maybe drew the mustache on the Indian). The use of multiple exposures to remind the audience of the caveman metaphor is typical of the period, but works well.

Very little of Chaney’s work from the 1910s survives today, which is one reason we’ve only seen him once before on this blog, even though he was working from at least 1914 on and made over 100 films before 1920. Most of these movies are lost, and this one was thought lost until recently, when it was discovered in the UK and sent to the Museum of Modern Art for duplication, and it was their print that I was able to see at Cinecon, apparently in the first audience to view the film for over 100 years. This is largely to the credit of Jon Mirsalis, who many of us know as an accompanist to silent movies and is also a collector and preservationist in his own right. I hope that the day will come when everyone can see it, along with the rest of our public domain film heritage, freely and easily from home.

This movie is not yet available on the Internet. 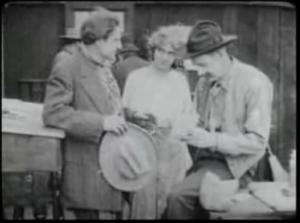 With the clock ticking here at the end of 2014, I’m trying to get ready for “awards season,” watching as many 1914 films as I can in order to better pick the nominations for the Century Awards. This movie is apparently the earliest known film Lon Chaney (who would later be best known for the impressive makeup of his monster roles, such as he played in “The Phantom of the Opera” and “The Hunchback of Notre Dame”). Here, he’s a deliciously evil villain, feeding intelligence from the bank to a gang of bandits so that they can rob stagecoaches full of gold while making time with the heroine, Agnes Vernon (also in “Bare-Fisted Gallagher” and “A Miner’s Romance”). When our hero (Murdock McQuarrie, who I found pretty forgettable, though he had an extensive career, including a role in Chaplin’s “Modern Times”) shows up, the girl quickly gravitates to him and Chaney winds up exposed for the scoundrel he is, of course. There appears to be some dispute about who directed the movie: archive.org says it was Tod Browning (who would later direct many of Chaney’s best films, as well as “Dracula” and “Freaks”), while Wikipedia and imdb both claim it was one Charles Giblyn, about whom I know nothing, and The Silent Era simply says it is “unknown.” I wouldn’t dare t guess, but it doesn’t have any tell-tale signs of Browning’s later genius, if it is him.

Babe Ruth pitching. He began his career as a left-handed pitcher for the Boston Red Sox in July 1914.

It’s time again for one of my monthly news roundups, in which I discuss what was going on 100 years ago, when the movies I review were being produced. This is a special month: July 1914 is generally known as the “July Crisis” which led up to the declaration of World War One and the “Guns of August.” It would be possible to dedicate an entire blog just to these events. In fact, my friends over at “The July Crisis, 100 Years On, 1914-2014” are doing exactly that, with daily updates on the events of 100 years ago. They’re doing it so well, I don’t see any need to replicate their efforts.

That said, I’m just going to hit a couple of World War highlights, and focus mainly on other things in the news at the time:

Funeral: the funeral for Archduke Franz Ferdinand is held July 4. Kaiser Wilhelm II of Germany does not attend.

Anarchism: On July 4, an explosion in Harlem kills several members of the Anarchist Black Cross and one of the IWW, along with one un-affiliated woman, and injures twenty others. The anarchists has been involved, along with Alexander Berkman and Louise Berger, in a plot to bomb John D. Rockefeller in retaliation for the Ludlow Massacre, but the dynamite went off unexpectedly in Berger’s home.

Legal: Supreme Court Justice Horace H. Lurton dies on July 12, at the age of seventy. He had been appointed just four years earlier, as the oldest member of the Court, by then-President Taft. He would be succeeded by the conservative James Clark McReynolds, appointed by Woodrow Wilson.

Ireland: On July 14, the House of Lords passes a bill for Irish Home Rule, but the World War prevents its enactment. Ireland continues to struggle for independence throughout the War and until another Home Rule Act (the fourth) is finally passed in 1920.

Mexico: On July 15, President Huerta resigns from office, under pressure from the United States and rebels within Mexico, including Emiliano Zapata and Pancho Villa. Huerta will go into exile and attempt to raise a new army with German support, but winds up imprisoned in the US until his death.

Ultimatum: on July 23, Austria-Hungary presents its ultimatum to Serbia. It includes demands that Serbia remove from office anyone the Austro-Hungarian government requests and the censorship of the press and removal of school text books critical of Austria-Hungary. It is calculated to be nearly impossible to comply with, as Germany and Austria have now made their plans for war.

Mobilization: On July 28, Austria-Hungary orders mobilization and begins hostilities against Serbia. Russia orders partial mobilization in response that day, and full mobilization on the 31st. A state of war now exists among belligerents in Europe, and mobilization will continue through August.

Movies released in July, 1914: “My Official Wife” starring Clara Kimball Young, “The Man on the Box” co-directed by Cecil B. DeMille, “The Stain” with Theda Bara, and “By the Sun’s Rays” featuring Lon Chaney, Sr.

Deaths: on July 1, both actress Grace McHugh and cinematographer Owen Carter die in an on-set accident during the filming of “Across the Border.”