We see a set of what seems to be an upper class lady’s bedroom, decorated with rococo flourishes. A woman in an elaborate ballroom dress is center stage and another woman, dressed as a maid, accompanies her. The maid assists the lady in removing the dress, her slip, a corset and stockings, finally resulting in a bodystocking intended to simulate nudity. The woman faces the wall and steps into a tub and the maid pours water over her (actually it looks more like black powder, but this was probably to keep the bodystocking dry) from a pitcher. The maid covers her in a towel and the two exit stage left.

This movie stars Méliès’s future wife, Jehanne d’Alcy, who would marry him almost thirty years after this movie was made, in 1926. At the time, Méliès was married to Eugénie Génin, the mother of his children, so this may be the first “scandal” in film history as well. The movie is clearly a “strip show” – nothing happens except for a woman removing her clothes – and there is no attempt to disguise this by framing it in terms of a plot device. It’s worth noting that the nude female form was an accepted subject in painting and other visual arts (and the male nude had made a bit of a comeback with the re-discovery of the Ancient Greeks in the 19th century), so Méliès may have been thinking of this as an area where cinema could become more sophisticated by emulating those art forms. The woman is both mature and rubenesque, as opposed to the very young, skinny women that would be more popular in US movies in later eras, and this seems appropriate to the time and place. I have to assume that the film was not a tremendous success, because none of the other surviving Méliès films repeats the experiment, and it may be that he had difficulty in exporting it to countries that were less tolerant of French morality.

Alternate Title: Après le bal, “After the Ball, the Bath”

Once more we have an example of something that may or may not be the first surviving “horror film.” This one is cataloged as #70 in the Méliès company catalog, which would put it after “A Terrible Night” (if the movie we have access to is the right one) and before 1896’s “The Haunted Castle.” Like the others, it is short, and not very scary.

In this case we see Georges Méliès walk onto stage in his role as a performing magician. He places newspaper on the floor and a chair on top of that, demonstrating that there is no trap door beneath which opens during the trick. He then calls his assistant out and has her sit in the chair, and covers her with a sheet. Voila! She has vanished. When he tries to make her come back, a skeleton sits in her place (this is the only real horror element). He again covers the skeleton, and the lady reappears. They take a bow and exit. 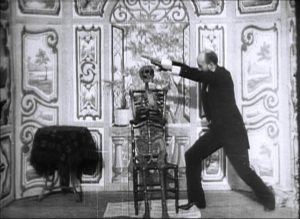 This is identified as the first of Méliès’s “trick films,” in which he used the “stop trick” (seen previously in Edison’s “Mary Queen of Scots”) to perform magic on screen. This was one of his most important camera techniques, and to some degree defines the rest of his career as a filmmaker. Because it allows “supernatural” events to be portrayed, it is also undeniably important to the development of horror movies. Indeed, the mysterious appearance of skeletons due to occult forces would be a key element in the 1942 Bela Lugosi movie, “Night Monster,” although I doubt if its makers had this parallel in mind.

Alternate Title: Escamotage d’une dame chez Robert-Houdin, The Conjuring of a Lady at the House of Robert-Houdin