This episode of what the long-running movie serial displays Helen Holmes at the height of her powers as “Helen,” a plucky telegrapher who winds up saving the day – again. If reports are accurate, she was also an uncredited director, making this an even more important piece of the history of women in film. 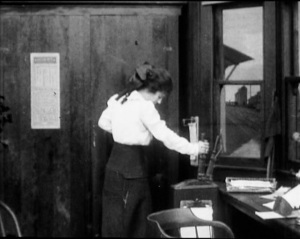 This movie begins with Helen at work. She receives and decodes a message, then gets up and pulls a switch that brings a locomotive to a halt in the station outside. As she accepts a large strongbox of money from the conductor, two shifty-looking tramps look on. They are thrown off the train by a man with a badge, who then comes over and assists Helen with the cart carrying the money box. They get it into her office, but neglect to bring the receipt, which the tramps find, learning that there’s $1500 in the office. Helen and the sheriff are unable to get the large box into her safe, so they leave it on the floor. As soon as the sheriff leaves, the tramps rush in with a gun. A rather complex cross-cut sequence begins with the sheriff outside, the tramps in the office, and Helen inside of a closet, where the tramps have shoved her after securing the room. They find the key and open the box, but Helen starts shouting for help. The sheriff doesn’t hear, but he does hear the gunshot that the tramps respond with. Helen, we see, has ducked just in time. Whew! 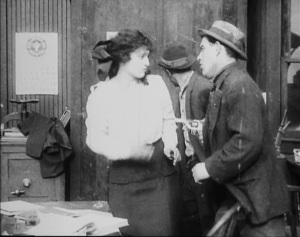