Having survived 15 death-defying situations in the previous year’s serial “The Master Mystery,” Harry Houdini is back in this feature-length adventure thriller which bills itself a “melodrama.” 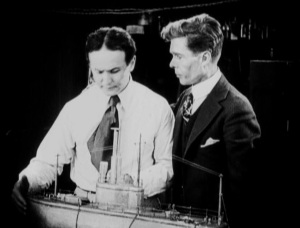 Houdini stars as Harry Harper, a treasure-seeker with a heart of gold who hopes to recover a shipwreck full of diamonds using his newly invented submarine in order to take care of local waifs who sell newspapers. Wilton Taylor and Edwin Brady are greedy treasure hunters who are gunning for the same treasure, and they read about Harry’s plans in the newspaper. Lila Lee is Beverly West, the horseback riding love interest who happens to be related to the bad guys and also possesses the map to the wreck in question, sent by her father in a plea for his rescue from island natives who plan to sacrifice him unless she returns a skull-shaped pearl he sent her earlier. Got all that? END_OF_DOCUMENT_TOKEN_TO_BE_REPLACED

To wrap up this year’s October review of chilling movies, I’m going to look at this serial starring no less a person than Harry Houdini. Once again, it’s not exactly a horror movie – it’s more of a crime serial ala Louis Feuillade – but it has madness, a robot, and lots of creative death-dealing situations for the hero to get out of, so I’m including it. 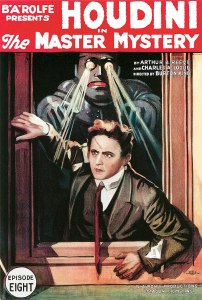 Our story begins in the home of Peter Brent (Jack Burns), the President of International Patents, Inc, a company whose nefarious scheme is to buy up the patents for new inventions from lone geniuses and keep them off the market – benefiting those who own existing patents by preventing free competition. Unbeknownst to Brent, one of his employees, Quentin Locke (Houdini) is actually an agent of the Dept. of Justice, investigating on the grounds of the Anti-trust Act, and he has wired Brent’s home for sound (most of the first shots we see of Houdini are his reactions to conversations other characters are having in other rooms, which can be a bit confusing). Locke is of course secretly in love with Brent’s daughter Eva (Marguerite Marsh), and Brent is actually having second thoughts about the whole scheme for her sake. Enter the real villains of the movie, Herbert and Paul Balcom (William Pike and Charles E Graham), a father-and-son team who hope to take over the company (the father) and marry Eva (the son). They also have collaborators in the form of a secretary named Zita Dane (Ruth Stonehouse) who is secretly in love with Locke and a lady-of-leisure with the unlikely moniker of De Luxe Dora (Edna Britton) who “dominates” Paul. END_OF_DOCUMENT_TOKEN_TO_BE_REPLACED