Released by Edison three years before “Children of Eve,” this movie also exploits public interest in industrial accidents generated by the Triangle Shirtwaist Fire. Unlike that movie, it also attempts to shift the blame for such accidents away from the owners and managers, and to the workers themselves.

The movie begins by showing an on-site inspector who discovers a pile of materials blocking an emergency exit door. He points this out to the owner (Bigelow Cooper), and begins to write up a citation, but the owner apparently talks him out of it. No money changes hands, and there is plenty of open space visible on a nearby wall, so maybe he has simply promised to move the offending objects. The next scene introduces the “lovers,” Hilda (Mabel Trunnelle) and Tom (Barry O’Moore), who are workers in the plant. When they kiss, the owner and inspector discreetly turn their backs for a moment. A shot follows showing “the day’s work over,” which appears to have been inspired by the famous Lumière short “Workers Leaving the Factory,” and then we see Hilda and Tom celebrating their engagement with Hilda’s family. The family also discreetly leaves them alone after Hilda has a chance to show off her ring.

END_OF_DOCUMENT_TOKEN_TO_BE_REPLACED

This late-period movie from Edison Studios seems to be an attempt at copying D.W. Griffith’s success with “social message” films, but winds up going in a surprising direction. It makes good use of New York locations to contrast urban poverty with natural, outdoor settings.

We see a busy New York street corner. A boy in rags is selling newspapers – or trying to, but no one seems to want one. We see wealthy-looking people come and go, businesspeople, workers, all hurrying to get where they are going, but no one buys a paper. The boy looks increasingly discouraged as time goes by. Finally, a woman with a little girl walks up to the corner. The woman isn’t interested in a paper, but the daughter feels sorry for the boy. She convinces her mother to give him a coin as a hand-out. The boy gratefully accepts and goes home. At home, his grandmother, who is drinking out of a flask, scolds him for not selling more papers. He tries to put the coin in a jacket pocket for later, but she catches him and takes it, presumably to buy more booze.

In the next scene, we see a minister hard at work at the Fresh Air Fund. He hands out stack of tickets to various women for them to distribute – each is good for a ride on a train to a picnic event. The boy gets up early Saturday morning to redeem one of these tickets, though it’s not at all clear how he got it. He meets up with the picnic party and is taken in hand by one of the young women volunteers. He rides out to a nice waterfront park, the like of which he’s never seen before, and runs on green grass and eats a good meal. The minister leads everyone in prayer before the food is broken out. After the meal, he hears a fairy tale about a boy who meets fairies and is carried in a boat to “the land beyond sunset.” When everyone gets ready to go back to the city in the afternoon, the boy hides and stays in the park, then he walks down to the beach. He finds an old rowboat and casts off. The final scenes show him afloat in his boat, drifting towards the sunset.

Oddly enough, this movie was made with the cooperation of the Fresh Air Fund, presumably to promote the charitable work they did with New York slum children, although the end seems to suggest that they routinely abandon kids in the park! The end sounds rather grim – this poor kid is either going to drown, starve, or die of thirst out there in this ratty rowboat – yet, it has a strangely positive, or at least melancholy, feeling, in part because of the lovely framing of the shot of the sunset. I’d love to know who the cinematographer was for this, but perhaps director Harold M. Shaw conceived it. As I suggested above, the city shots are also quite memorable, and the whole piece is one of contrasting images. The kid in this movie reminded me of Jackie Coogan (who wasn’t born until 1914), and I thought did very well in showing his feelings through body language. The park footage was shot near Long Island Sound in the Bronx, so the whole production was done close to home for relatively cheap. It’s a poetic little film from a largely ignored (at this point in time anyway) studio. 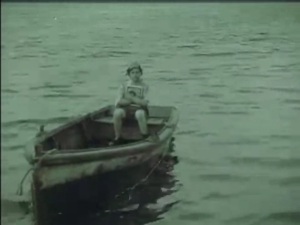 This short from Edison Studios may be the schmaltziest of the early silent Christmas movies I’ve reviewed this year, but I also found it to be emotionally effective and enjoyable to watch. It establishes a long-standing trend of the Christmas special with the basic plot of “a curmudgeonly old person learns the true meaning of Christmas.” 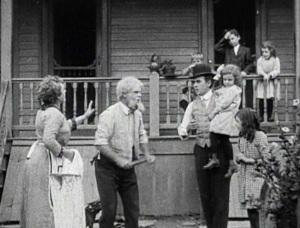 The movie begins by establishing the two neighboring resident-families of a duplex. On one side is a poor but happy family with a lot of children. On the other, a grizzled old man and his wife. The old man gets angry when the children play on his side of the back yard, or play with his dog. The poor family puts up with his abuse and remains positive. One day, a grocery order for the old couple is delivered to the family by accident. The mother cooks up the roast before the mistake is discovered, and when they offer to return the food, the old man refuses on principle. The wedge grows still deeper when the old man finds his dog dead. On Christmas Eve, the family is doing its best to celebrate with the means available, although the children must share a doll and there is no bird for the dinner. The old man is returning from the store with a turkey, but is driven, snowblind, into the wrong apartment. He is welcomed by the family as a guest, and they invite him and his wife to dinner. Embarrassed, he offers them the turkey and is charmed by a gift from the eldest girl. 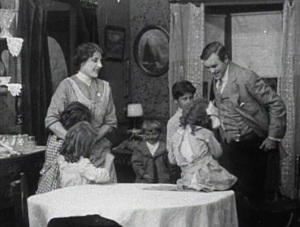 I don’t usually worry about “spoilers,” but I’m leaving that final moment a bit vague because the gift from the child is the emotional “punch” that makes this movie work. If you can watch it without even a few tears…well, you have more emotional control than I do anymore. There seems to be some dispute about who directed: the “A Christmas Past” DVD credits Bannister Merwin and imdb and other online sources say it was Harold M. Shaw. Since Edison didn’t credit its directors at all at the time, this may be uncertain. The film is fairly typical – sequential editing, stationary camera, all done in medium-shot, etc. A final close-up allows us to read the note on a Christmas gift, but there are no faces shown in close-up, even where it would accent emotional situations. I did think it was an interesting (today untypical) choice to have the connection made between the mean old man and the eldest daughter, rather than the smallest and cutest available child. This may reflect a more realistic attitude or just the difficulty of getting small children to perform on cue. 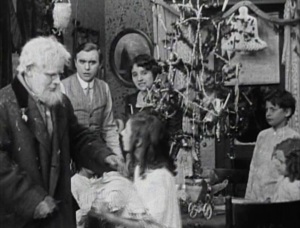