This comedy short stars Harold Lloyd in an early version of his “glasses” character and pulls together many jokes that had been around at least as long as the movies, but manages a pacing and zaniness that shows how Lloyd rose to become one of the major comedy stars of the next decade.

The movie starts out in a (still) photographer’s studio, where Bebe Daniels is annoyed by the off-hand sexual harassment of the proprietor (William Gillespie). She runs to the phone to call her large and jealous husband, who tells Gillespie that he’s coming after him, firing off his gun a couple of times to make the point. Meanwhile, Lloyd works at a nearby vegetable stand, where he presses down the scales to rip off customers and charges a “war tax” of $1 for each item. A group of policemen come up and accuse him; he tries to buy them off with produce, but winds up running into the photographer’s to hide. The photographer mistakes Harold for the husband at first, but when Harold tries to hide instead of killing him, he gets an idea. He puts Harold in charge of the shop and goes to hide in the dark room.

The next sequence of the film is a parade of silly customers to the studio, and Harold’s silly attempts to photograph them. One is an old maid (Dorothea Wolbert) who won’t stop talking, so Harold puts her face into a stand so she can’t speak, then poses her with a jug which winds up spilling all over her. He gives her a life preserver. Then a group of drunken swells come in (one of them is James Parrott). Lloyd has a hard time getting them to sit without falling over, but eventually poses them as “faith, hope and charity.” A country couple comes in, but their scene evidently was cut, as we cut back to Bebe and her husband, before seeing the “burles-queen,” who shocks Lloyd with her revealing outfit and briefly fights with janitor Snub Pollard when he tries to look up her skirt (with binoculars, no less). Snub is locked the dark room with the real photographer, but sticks Harold with a pin to escape, just as the husband charges in.  He fires his gun and now Lloyd also hides in the dark room, shoving first Pollard, then Gillespie out to confront the enraged man. A couple of fortuitous bits of crockery are hurled, forcing the husband into the dark room when a police inspector finally comes in to break it all up. Lloyd lets the husband out at the critical moment to punch the inspector, who arrests him, then embraces a quite-willing Bebe for the camera. The End.

A lot of the photography jokes go right back to early Edison, Gaumont, or Lumière films, but where they would have been entire films unto themselves in those days, here they are all thrown together and run at a furious pace, keeping the laughs coming non-stop. There’s little concern in this Hal Roach picture for narrative logic, and a lot more for comedy chaos, but it has a more deliberate feeling than comparable Keystones, as if Lloyd and director Alfred J. Goulding had thought through the chaos carefully before starting. The editing is spot-on and we get multiple camera-angles within scenes as well as cross-cutting to suggest simultaneous action. In other words, state of the art for 1918, but with a devil-may-care attitude to plotting that ties it back to an earlier style of comedy as well. A great example of Lloyd’s developing comedy style, before he started hanging of the edges of buildings to get laughs.

This horror spoof kicks off my annual “history of horror” for the month of October. It is a very funny – but also deeply problematic – comedy short featuring Harold Lloyd in his now-established “glass” character. 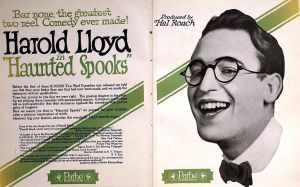 The movie begins with a series of funny intertitles that establish the cast and situation. Mildred Davis plays “The Girl,” who we are told is “Sweet Sixteen and never – – – well, only once or twice.” It is established that she is due to inherit a plantation and its associated fortune from her grandfather, so long as she is married and willing to live on the grounds with her husband for one year. The titles also tell us about Lloyd’s character (“The Boy: He wants to get married – – – Has no other faults,”) although we won’t meet him for a little while yet. Before that, we watch as her uncle (Wallace Howe, who plays “A man of sorts – – we are not saying what sort) reads the will and realizes that if he can drive her out of the house, he and his wife will be sole inheritors of the old Colonel’s property. Then we watch  clear parody of one of D.W. Griffith’s classic “bird-smooching heroine” introductions, in which Mildred is simply covered in cute critters, and even feeding a piglet from a milk bottle as well. Now William Gillespie, playing the family lawyer, arrives into her idyll and informs her of her new wealth, discovering to his embarrassment that she isn’t married. He promises to find her a cure for that and dashes off in his car.

END_OF_DOCUMENT_TOKEN_TO_BE_REPLACED

While this isn’t the first Harold Lloyd movie reviewed on this blog, it is the earliest I’ve seen with him in a starring comedic role. This comes from his time working for Hal Roach for the American Pathé Exchange. It does not disappoint, despite an obviously lower budget than Charlie Chaplin had at the time for his work.

Lloyd is still (sort of) impersonating Charlie here as the owner of a small movie theater – although his mustache is somewhat the inverse of Charlie’s and his pants are tight rather than baggy, he hasn’t developed the bespectacled, straw-hat-wearing look we associate with his 1920s pictures either. At times, he seems to try to walk like Charlie, but at others, his natural physicality takes over and we see his persona come through. Harold tries to run the movie theater more or less alone, he sells and tears the tickets, and he seats each patron individually, more or less by brute force. This would be a bit much, but he makes it even harder on himself by taking time to chat up all of the female customers. At least he doesn’t try to run the projector. He leaves this up to Snub Pollard, who seems to serve the purpose of Ben Turpin in an Chaplin Essanay film (or his own role in “By the Sea“). Snub unreels a large amount of film and makes a mess (and a fire hazard) of the projection booth. Once he gets it going, he falls asleep while cranking, requiring Harold to run up and boot him in the pants, which only makes him crank much too fast. The climax comes when a country yokel, straight out of an Edison comedy, puts his pipe in his pocket and catches fire, resulting in everyone panicking and running out of the theater. Snub leaps out of the projection booth on top of Harold. 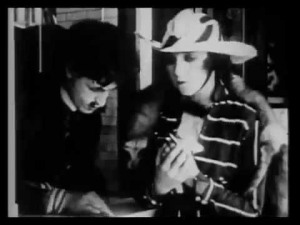 What really struck me in this movie is how nice the small 10-cent theater looks compared to the movie theaters in Chaplin films of just two years earlier, to say nothing of “Those Awful Hats” (1909). The space is large and the screen is set above the heads of the patrons so they don’t block one another’s view, despite the lack of a sloping floor or theater seating. I also appreciated the attention given to the piano player – a vital element in every theater by 1916. The movie uses close-ups and sophisticated editing, but most of the humor comes directly from slapstick and Harold’s physical timing.

Twenty five years before Judy Garland, L. Frank Baum himself was involved in the production of several “Oz” films, through a company called “The Oz Film Manufacturing Company.” Although the movies were not successful, Baum must be seen as smart to try to cash in on the new medium, at a time when producers were eagerly grabbing up (or stealing) written content to serve as storylines. This was the first of his books the company adapted, and it relies on pantomime and slapstick, and a few Méliès-style special effects, to create the atmosphere of his imaginary kingdom. There are few intertitles, but we do get camera movement and intercutting between scenes. The “girl” of the title is played by a man (French acrobat Pierre Couderc), while the main Munchkin “boy” is played by an adult woman (Violet MacMillan, who made her name as the “Cinderella Girl” for having children’s size 11 feet). There is other gender-bending in the cast as well, and all the gender-identified women fall in love with a miniature statue of one of the only males played by a man who is neither old nor deformed. Harold Lloyd and Hal Roach, who went on to make many great comedies together, met on this film, each of them in the ethnic-caricature role of a “Tottenhot.” Ozma of Oz, the Scarecrow, and the Tin Man all make appearances near the end.