This short comedy from Keystone Studios displays both the studio’s embrace of anarchic fun and its rejection of political anarchism in a single blow. It uses violence and the Keystone Kops to deliver the mayhem audiences were looking for.

The movie begins by introducing the Chief of Police (Edgar Kennedy) and his family – an unusually intimate portrayal for a Keystone Kop. He has a wife and small baby, as well as young uniformed maid (Dixie Chene), living with him in a small but comfortable home. The maid, laughing and smiling, takes the baby outside. He kisses his wife goodbye  and goes off to work. We cut to a more familiar Keystone tableaux, as a cop (Charles Murray) with a rounded helmet yawns and stretches out for a nap on a park bench. At an undetermined location elsewhere in the park, we see four shady-looking characters with mustaches (who include Harry McCoy and Charley Chase) crouched down, participating in a dice game or some similar activity. Suddenly, Kennedy comes across them and chases them into the bushes. They all tumble across the bench where Murray is napping, knocking him down. Murray jumps up and gets his billy club ready to hit anyone else that comes through the bushes and of course Kennedy does and Murray clocks him before realizing he’s the boss. 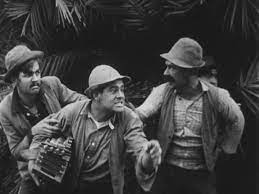 Murray and Kennedy sort things out, but the criminals get away. Kennedy finds the maid on her walk and says hi to his baby, unaware that they are watching him. Now Murray finds the maid in the park and gives her a kiss, showing that they know one another. She lets him hold the baby and goes shopping, and when Kennedy finds him slacking off again, he removes his stripes and badge. After he leaves, the bad guys swarm in and take the cop and baby hostage. They take him back to their hideout which is full of dynamite and explosives, and they prepare a note threatening to blow up Kennedy’s house. Then they give Murray the note and a classic round black bomb to deliver. They don’t trust him, so they go with him, leaving the baby in a pile of dynamite. 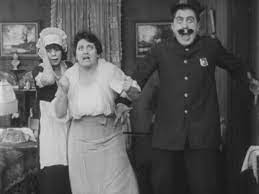 Murray breaks in to the house and places the note, but gets his foot stuck hiding the bomb, so has to climb into the settee with it. When the family finds the note, they panic, but instead of evacuating, they start tearing the house apart looking for it, looking everywhere but the settee. Eventually, Murray makes his presence obvious, after the wife engages with a comedic battle to keep the rebellious settee closed. The bomb is smoking now, and everyone runs out, Kennedy eventually throws it into Murray’s hands and fires his gun to make him run. He crashes into the anarchists, and a running shootout begins as more cops arrive. Murray runs back to the hideout, with the gangsters and the police close behind, and finds the baby. As he gets ready to rush out, the bad guys get to the front door and Kennedy hurls the bomb into the shack. Murray climbs up onto the roof while the bad guys try to shoot the door open. They get in, he seals the trap door and the cops are at the front, with the anarchists trapped inside with their own bomb. Murray grabs a telephone wire and hand-over-hands himself to safety, the baby’s swaddling clothes held in his teeth. All of the good guys rush over to congratulate him and the bomb finally goes off, destroying the shack, all the explosives, and presumably the villains.

The trope of the bomb-throwing anarchist, while based to some degree on radical direct action of the time, had by 1914 become a trope of political cartoons and other media, and was often associated with racism against immigrants, especially those from Southern Europe. We’ve seen it used before, including in Charlie Chaplin’s “Easy Street,” but it is taken to a clumsy extreme in this movie to create anti-cop bad guys that will be instantly recognizable and not require any back story, which a single-reel film like this one has no time for. It stands out because Keystone Kops humor often mocks the police, and much of the more well-remembered slapstick of the time glamorized the little man (or tramp) who managed to get the better of them. There is some of that mockery here, in Murray’s incompetence and Kennedy’s bullying, but ultimately we see the police in this movie as on the side of right. Still, it’s all really just a set up for manic running around and the tension of wondering when the bomb will go off.

For us today, it’s a rarity to get to see a Keystone Kops movie that actually stars…the cops, and not someone like Chaplin, Ford Sterling, or Roscoe “Fatty” Arbuckle. This is probably more representative of the vast majority of Keystone output that didn’t trade on any star power of big personalities, but just worked to a comedy formula that was known to work. The standard of film making is pretty typical as well. We get an insert shot of the note, a couple of brief close-ups, and a few two-shots, but most of the movie is played at proscenium distance with characters moving about little stages, linked together through editing. The editing is fast, as you would expect in a comedy, and uses cross-cutting to heighten the tension of the bomb and the rescue. The result is cheap, effective, funny at times, and recognizably Keystone.

I have not found this available to watch complete on the internet. If you do, please comment. You can see a brief sample: here.

This short comedy from Keystone Studios seems to play upon themes established 11 years earlier in “The Gay Shoe Clerk,” but with a touch of Mack Sennett’s chaotic style thrown in for flavor. It still looks a bit old-fashioned for 1914, possibly deliberately so.

The movie begins with an establishing shot outside of a shoe store. A young lady (Alice Howell) and a man with a silly mustache are standing in front, and he takes her by the arm and leads her inside. We now cut to the interior, where a thin, slightly foppish young man speaks to them. Evidently the first man is buying shoes for himself and his wife. The first shoe clerk summons another over to see to the gentleman, and he leads the lady to the other side of the store, where she sits while the salesman summons another clerk (Charley Chase), this one being flamboyant and feminine in his gestures. She offers him her foot to measure, but he reacts in melodramatic horror to see her toes peeking through the end of a torn stocking. He seems to be lecturing her on hygiene, and she reacts by looking away from him. The husband sees this, and comes over to glare at the clerk. He runs to the back, to get her shoes ready for sale, and decides to put a note in her shoes. He borrows a pen and paper from a female coworker, and then delivers the shoebox to the clearly annoyed lady customer. She and the husband exit the store, evidently arguing about the clerk’s unwanted attentions. They go in separate directions. 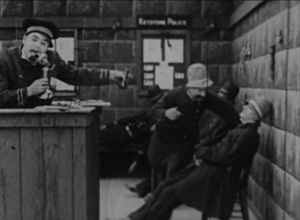 The wife returns home (“broken-hearted,” according to an intertitle) and commiserates with her maid (Dixie Chene). She takes a magazine outside to read, discarding the unlucky shoes unopened. Meanwhile, “Mr. Birdie” (the clerk) is now going to the park to for what he hopes to be a rendezvous with a married woman. Of course, he encounters Alice on a park bench, sobbing because of the fight with her husband, and sits next to her, oblivious to her feelings. Now the husband comes home and finds the discarded shoes with the note, vowing to murder the clerk (whom he de-genders as “it” in the intertitles) if he finds them together. The maid is meanwhile flirting with a rather dim-witted young man (possibly a delivery boy, from his attire, or else another servant like a gardener), to the husband’s decided disapproval. The husband rushes out to the park and finds the two of them together, making threatening gestures that the clerk laughs off until he produces a gun and starts shooting at the ground.

Now, a classic Keystone chase begins, and the wife and the maid rapidly enlist the aid of Keystone Kops. Of course, the clerk decides to hide in a chest that the dim-looking servant brings into the house, so now he has no possibility of escape. A comedy routine involves the many steps the servant has to go up (and frequently falls back down) while carrying the chest and tension is held as several people start to open the chest before being distracted by something else. Ultimately, the maid finds him and the chase begins anew, with Birdie hiding in the dumbwaiter, unable to find an unoccupied room to escape into. The Kops now arrive in force, and begin shooting at the servant, not evidently knowing who they are after or why. He hides under the sink, which the Kops promptly shoot full of holes. Finally, the clerk manages to fight everyone off with his handkerchief, knocking over the whole cast, and, snapping his fingers, leaves the house with a rude gesture.

Charley Chase’s performance really makes this movie something special, and it’s very hard for a modern audience not to read his gestures and body language as queer – something which quite possibly could have been intentional on his part, whether or not audiences of 1914 were sophisticated enough to get the joke. That makes it twice as funny that the title of the obvious inspiration of “The Gay Shoe Clerk” had a different meaning at the time. It also struck me with this viewing that the title’s similarity to the other 1903 hit “The Great Train Robbery” (itself basically a well-edited chase movie) might have been intentional as well, meaning that Sennett was lampooning Edison in more than one way here. The editing of this movie keeps it moving effectively, and all of the random elements work together well, with the absurdity of the situation constantly growing, but without giving the audience too much time to reflect on how silly it all is. This is one of the more fun Keystones I’ve seen, in fact and it holds up well enough today.