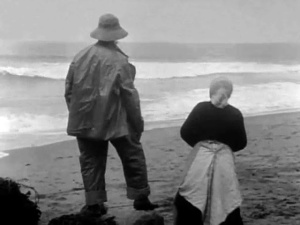 This Biograph picture by DW Griffith is based on the poem “The Three Fishers” by Charles Kingsley, which provides a somewhat different structure to the storyline than similar shorts of the time. At the beginning of the movie, the intertitles are almost all quotes from that poem, which manage to tell the entire poem before the movie storyline completely takes over. That story involves a fisherman in a small seaside village who leaves his pregnant wife behind to go to the sea and fails to return, leaving her and the child alone for years. His companions’ bodies are washed ashore, but the sea never gives him up, leaving the wife uncertain to his fate. It develops that he’s been in another village all this time, apparently suffering from amnesia, but he finally returns to find his wife and now-grown child – who now has a fisherman sweetheart of her own. The husband is played by Arthur V. Johnson, who we’ve seen in “The Adventures of Dollie” and “The Sealed Room” and the wife is Griffith’s real-life spouse Linda Arvidson, who was in “Corner in Wheat” as well as “The Adventures of Dollie.” Mary Pickford (from “The Usurer” and later in “Poor Little Rich Girl”), again edging toward stardom, is the grown daughter, and Charles West (whose career includes “The Redman’s View” and “In the Border States“) is her boyfriend.