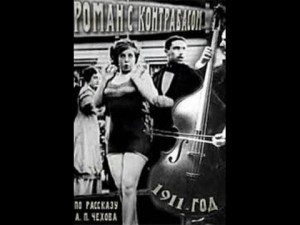 This Russian comedy short relies mostly on situation rather than slapstick for its humor. However, as compared with “Princess Tarakanova,” the actors do rely more on pantomime to get the story across and we have no intertitles at all. In this one, a very different sort of a princess goes out fishing at a local stream. So far as I can remember, this is the one time in 104 years of movies that I’ve ever seen a woman cast a fly in a film (someone can correct me in the comments if Katherine Hepburn actually did it in “Bringing Up Baby” or something, but all I remember is golf). Anyway, once we’ve gotten past the shock of that gender-bending situation, we are introduced to a musician traveling with his friends, who decides to put down his instrument and take a dip, just a little way downstream. His friends move on, and as soon as they do, two thieves show up and steal his clothes, as would happen in any American comedy of the period. The swimmer spies the princess napping and swims up to meet her, but becomes shy, perhaps because he’s only wearing a longjohns-style-swimsuit, and moves on. When she wakes up, she goes for a dip too. She, however, is wearing the latest in Paris fashions in swimwear. Still, while she’s in the river, the same two thieves steal her clothes. When each comes back to land, they discover their embarrassed state, and soon afterward, they discover each other. Luckily, the thieves didn’t take the heavy double bass (I guess there’s a big market in Russia for illegal clothes fencing, but not expensive musical instruments), so the musician convinces the princess to hide in the case while he chases after the thieves. The friends now return and, finding the case abandoned with no musician about, pick it up and carry it to the nearby home of the princess. She bursts out, in front of her father, his guests, the servants, and everyone, humorously ashamed of her semi-nudity.

Charles Musser, in The Emergence of Cinema, mentions a number of American comedies in which women’s bodies are exposed for the pleasure of male audiences. This one differs slightly from that earthy tradition. For one thing, it’s based on a Chekhov short story, suggesting that even where light comedy was concerned, Russian audiences wanted to class up the movies with a little culture. For another, the man in this story is also deprived of clothing, although his embarrassment is not lingered over as much. It’s hard to imagine that female audiences found his skinny frame as interesting as the men found the princess, either. Finally, in the movies Musser mentions, the father is often also the butt of some Oedipal prank, as where the escaping boyfriend topples the peeping father from a ladder in “How the Athletic Lover Outwitted the Old Man,” but here the father is an agent of the girl’s humiliation.