This short Lumière film shows the propensity of the Lumière brothers for showing films of family life, which were comparably rare from Edison at the time. Two infants are shown having difficulty learning to share.

Two babies in high chairs are next to one another with trays that seem to hold food and toys. They are wearing similar petticoats and hats. One is playing with a large spoon, and the other (who seems to be slightly larger) reaches for it. When her sister will not relinquish the spoon, she starts to hit, eventually wresting the spoon away from her. Now the smaller one begins to cry, and the elder seems to feel some remorse. She tries to give the spoon back, but the other child is too deep into her tantrum to notice.

This movie will probably remind parents and others who have been around small children of many similar situations. I couldn’t tell for certain whether either of these children was Andrée Lumière, who we saw in “A Baby’s Meal,” but I suspect that one of them is. The elder child looks to the camera from time to time, and looks as though she may be receiving coaching from off camera as well. Hopefully no one told her to hit her sister! 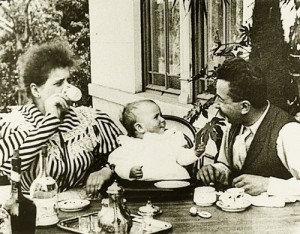 Like “Fishing for Goldfish,” this is another home-movie of the Lumière family relaxing at home. It was also shown at the first screening of Lumière movies in December 1895. Here, we see Auguste Lumière with his wife and child, Andrée. Once again, the baby is the center of attention, as Auguste feeds her from a spoon, then hands her a cracker. Just as she starts to put the cracker in her mouth, she looks up at the camera, and seems to offer it to the audience. No doubt this unexpected action gave the movie a greater emotional impact for those first viewers. For us, the fascination is seeing a child that would be well over 100 years old today. Unfortunately, Andrée was a victim of the influenza epidemic at the end of the First World War, surviving only to the age of 23.

This is another of the films shown by the Lumière brothers at their first screening of movies in December, 1895 – the event that marks the birth of cinema. It is a brief film in which a man holds up an infant while the child attempts to grab a goldfish out of a large bowl. It is extraordinary that the baby doesn’t tip the bowl over, spilling water and fish all over. The man is Auguste Lumière, and the child is his daughter, Andrée. The movie demonstrates the “family-oriented” sensibilities of the Lumières. Rather than dancing girls and men in barber shops (as in America at this time), the French are showing us cute children in homey settings. I’m not certain if it was the case that many of the engineers working at Edison were bachelors, or if the Lumières had a stronger sense of attachment to their families, or if this is simply a result of the fact that the Cinématograph was portable, allowing the men to take it home with them, as opposed to the Kinetoscope which had to stay in the studio, and have subjects brought to it to shoot. At any rate, it’s the sort of home movie that many parents would shoot in the ensuing century.