This early short from Louis Feuillade pre-dates his better-known crime serials and shows his sense that film can and should be wholesome and uplifting. It is one of many efforts to bring the Bible to the screen, and shows considerable production value, if not a lot of dramatic interest. 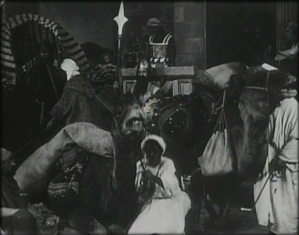 The movie begins by showing us a group of shepherds on a small set, dressed to look like a manger at night. Suddenly they awake and witness an angel, and soon a host of angels is playing trumpets to hail the arrival of the messiah. The shepherds fall on their knees to give thanks, then after the vision disappears they express their wonder and joy and set out into the night. The next scene shows Mary and Joseph and the child; interestingly their manger is behind a large stone arch, and includes a cow. We see the shepherds’ herds of sheep in the background as they arrive to worship the child. The next scene shows the hustle and bustle of Jerusalem as the three Magi arrive in a caravan with porters and camels. They approach Herod’s palace and gain admission from the soldiers on guard, while the camels squat down on the tiny set. They are shown into Herod’s throne room, where they convey the story of their vision and quest for the child. Herod sends them on their way as emissaries to represent him, but his wife and advisers seem to raise doubts in his mind. We return to the palace exterior set and see the caravan raise up and depart on its journey. Then, the Magi arrive at the cave-manger (sans camels) and kneel down before the baby Jesus, presenting him with their traditional gifts. Meanwhile, Herod and his wife are plotting on the roof terrace of their palace, and they decide upon the slaughter of the innocent, to prevent Christ’s growing up. An intertitle informs us that an angel has warned Mary and Joseph, and that they are fleeing to Egypt. We see a brief scene of their flight through the wilderness, and then their rest at the end of the journey, where they sleep against the Sphinx while their donkey grazes.

Biblical movies often have difficulty maintaining the dignity and seriousness of their subject matter while still being entertaining. Here, a lot of money (at least by the standards of 1910 production) was clearly spent on sets and costumes, but Feuillade seems to have had some difficulty with the script. He lingers on camels and sheep, and on large processions, but doesn’t show us everything we want to see. Specifically, although the plot hinges on the story of the slaughter of the innocent, no depiction of violence is shown at all. Apart from that, while we have the dramatic appearance of the angels to the shepherds, it seems like the more suspenseful vision, that of the angel warning Joseph to flee Bethlehem, would be a more powerful image. From a modern American perspective, it’s interesting that the story of Mary and Joseph taking refuge in a manger because of poverty and intolerant inn-keepers is skipped over, though this may have been typical of the French Catholic telling of the story at the time.

I have not found this film available for free on the Internet. If you do, please comment. 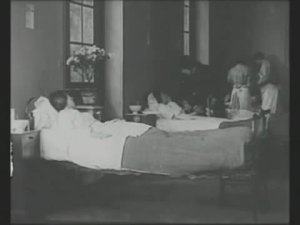 This longer story by Louis Feuillade (feature-length, if we accept the Academy of Motion Picture Arts and Sciences’s liberal definition), is quite somber and serious, although also interestingly different from similar morality films from the US at the time. Anna (Renée Carl, who we’ve seen in a number of these Gaumont movies now) is a “flower girl” working at a brasserie frequented by “loose women” and making time with a dandyish medical student. She is unhappy in her job, but a real doctor strays in and offers her work at a hospital for seriously ill children and old people. She writes her boyfriend a goodbye letter and travels South, taking up her work with determined efficiency and a good bedside manner. Years later, when the old doctor dies, she becomes the director of the hospital. And then her old lover hears of her success and tries to chisel her for a job. When she refuses, he writes to a newspaper of her “sordid past.” The board, which at first appears willing to defend her against slander, decides to dismiss her when she owns up to it all. She can’t get a job without references, and is on the verge of suicide, but she collapses back into her chair and a final intertitle tells us she “considers the Far East — where people stricken by plague need nurses to liberate them from death.”

Now, as this is a bit longer, I want to take a bit of time to discuss it. First, it is interesting that the actress here is not made up to be at all glamorous or attractive, she is quite plain-looking and rarely, if ever, smiles or appears happy. Second, although Feuillade mostly keeps this one inside the cramped, stagey-sets of his studio, we do get some beautiful shots of Paris and the hospital grounds, and a shot of a train racing South that put me in mind of Lumiere, except that the angle was rather more interesting. While we’re on the subject of photography, there’s also an interesting tracking shot between two of the cramped sets at the employment office – nothing groundbreaking, but camera movement is so rare in 1911 that it stood out. It’s quite slow and deliberate, matching the mood of tragic destiny that prevails.  Third, I was fascinated, both by the apparent sympathy for the heroine shown in the narrative, and by the fact that having worked in a “brasserie” would disqualify a competent nurse from hospital work. Wikipedia tells me that “brasserie” means “brewery,” although the translated intertitles once used the term “dance hall,” perhaps trying to make the negative connotation clear to Americans. We don’t see any dancing, though, just what looks like a fairly congenial restaurant, with mostly female wait staff and mostly male clientele, both quite conservatively dressed and not touching one another. I admit, I don’t know much about the turn-of-the-century mores of French dining establishments, but it seems like a pretty judgmental position, perhaps the French equivalent of the gossips fussing about Mary Pickford’s “New York Hat.” Here, however, no one gets any comeuppance and the tragedy is taken almost to its final extreme, aside from the fact that the last intertitle tells us that Anna is truly redeemed and will continue her good works. 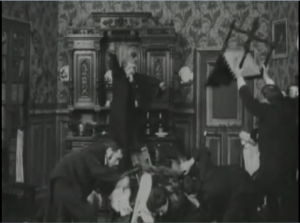 This early short by Louis Feuillade has something of the feeling of a Méliès comedy, although without the expected special effects. A middle class dinner party is disrupted when one of its members – a retired colonel – relates one of his war stories in an overly-animated manner. As his narrative proceeds, he begins acting out the campaign, overturning the table and attacking his fellow diners. Eventually he is subdued by a “devious counter-attack,” in which the entire party pummels him with discarded food from the floor. All action takes place in a single frame, occasionally interrupted by forward-facing intertitles and no editing or camera movement at all. It’s a fairly typical film of the period, not badly done, and it did get a few laughs out of me, but there’s nothing to suggest its director’s later genius.