This early short from Max Linder demonstrates a very different style to what would become his established routine in later movies, seeming to draw from the work of Georges Méliès, as well as French folklore, for its inspiration. Rather than his usual fussy modern aristocrat, Max plays a fairy tale hero in this one.

The movie begins with a series of shots of Max, in Harlequin costume, leading a group of short masked people (probably intended to represent elves, dwarves, or goblins) through various medieval settings. Real locations are used for this, no doubt genuine castles and other ancient landscapes in France that were briefly closed off so that the costumed actors could appear to exist in some timeless period. The small band climbs a stairwell and enters a room, causing smoke somehow to start billowing up from the floor, then they all run off screen. The next scene is preceded by the intertitle “Harlequin rescues his love.” We see a group of well-dressed people surrounding a girl on a short pedestal. She moves in a mechanical way, turning and bowing to the people in the room, to their evident delight. Suddenly the smoke enters the room and all of the aristocrats flee, leaving the clockwork girl alone. She stumbles and collapses from her perch.

The room now transforms from a nice, well-appointed space to a ruin. Now Max enters and finds her in pieces on the floor. He gathers up the pieces of the girl and stuffs them into a sack and carries her away. The next shot shows Max, still with the sack, some distance from the smoking wreck of a castle. He uses a magic wand to create a bridge across a chasm and escape the wreckage. He brings the sack to a beautiful fountain and with a wave of the wand, brings the girl back to life. She now moves in a natural manner, embracing Harlequin and walking off with him. The final scene is called “Harlequin Triumphant” and it involves a series of fairy dances, in a set that closely resembles a Méliès movie, even to the point of having a face like a large moon presiding over the proceedings. 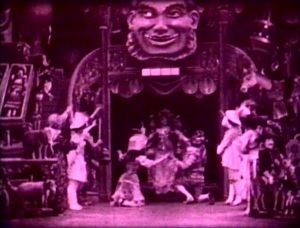 It’s important to realize that when this movie came out, Méliès was one of the most important and successful filmmakers in the world, and that much of the movies coming out imitated or outright stole from him. This is at least somewhat original, more of a homage than a rip-off, though it’s not really what we think of when we think of Max Linder. We hardly see Max’s face at all – most of the scenes are tableaux in proscenium-style sets in long shot. There is one rather lengthy pan as Max and his fairies move through the streets, but Max is always shown at full-figure, never in close-up. The use of actual castle locations is what gives the movie its distinctiveness, although most of the action takes place in sets like the one used for the final fairy dance. I believe that the final fountain where Harlequin resurrects his girlfriend may be at Versailles – possibly a good part of the movie was shot there. In all, it’s an amusing entry in French cinematic history, though not very representative of the work of Linder.