I’m kicking off 1923 with this fragment from director Richard E. Norman. It serves as a reminder of the fragility of the art of film as a medium – and choices that are made about what is preserved and what is not. 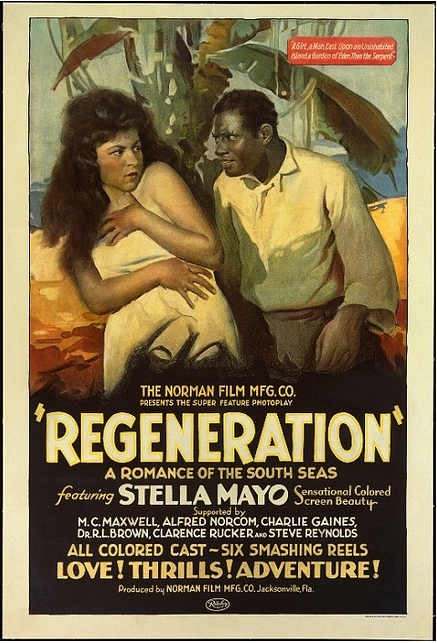 The opening credits inform us that this is part two of a serial produced by the Norman Film Manufacturing Company of Jacksonville Florida. An opening intertitle appears to assume the audience is up to speed as it informs us that we are seeing “The Eve of Sailing.” The opening shot is of a group of African American sailors (one in a chef’s uniform) working on the deck of a small craft. A man in an officer’s uniform talks to a young woman; she is concerned that the crew all look like “villains,” but he assures her he can control them. We get a shot of the one-legged cook singing a song about evading work, strumming on his crutch like it is a banjo. The officer chides him and orders fried chicken for dinner. The footage starts to break up pretty badly at this point, and much of the action can only be concluded by reading intertitles, which linger on the screen even as the nitrate damage dances around them. It appears that as they get far out to sea, the crew rebels and tries to force the officer and his girlfriend to surrender a treasure chart they have in their possession and which is presumably the motivator for the voyage. The cook, despite the rough treatment he received earlier, appears to side with them and work behind the scenes to help them to escape. He seems to sow seeds of discontent among the mutineers, who fall out and accuse one another of stealing the chart. The cook is menaced and surrenders the chart. The episode ends with a promise that the story will continue in part 3.

Like many films from the silent era, this movie is essentially “lost,” but we are fortunate to have enough of it to know that it once existed. Studies show that a vast number of films from the silent era have been lost or destroyed over the decades. One reason we know so little now about African American film history is because the “race pictures” that were made in the silent era were not seen as culturally significant; some came from studios that went bankrupt and lost control over their collections, others were distributed with limited prints to begin with, and few film collectors have made them a priority. As with so many aspects of our culture, the most vulnerable groups lose out in history because they don’t have the power to prevent their erasure from history.

Thankfully, however, we do have both this clip (thanks to the Library of Congress and Kino Lorber’s “Pioneers of African-American Cinema”). We also have a good deal of historical background about this movie, thanks to The Norman Studios Silent Movie Museum website. I won’t repeat everything you can read there, but they nicely document director Richard E. Norman’s showmanship and business acumen in working with distributors and local censors to get his movie seen. What we can see of the film reminds me of other adventure movies of the time, such as “Terror Island” with Harry Houdini. While the production values, marketing, etc may have been good, it’s somewhat disappointing to see the cook portrayed as a standard minstrel-show lazy Black man, though his apparent redemption as the one crew member not standing with the mutineers might help make up for that, if only we could see it more clearly.