A young Stanley Laurel (sans Hardy) stars in this two-reel comedy directed by G.M. “Broncho Billy” Anderson. Not as far out as a Mack Sennett, nor as refined as the work of Keaton or other recognized geniuses, it still has a few laughs and some interest for us today. 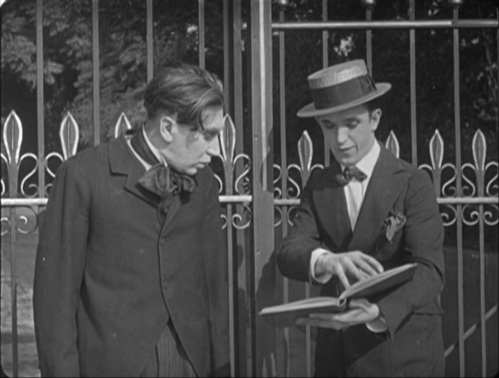 Laurel plays a “book agent” according to the credits, which seems to mean a man who goes door-to-door selling biographies of Napoleon. As the movie opens, he is going on at some length about the merits of reading up on the great man to a potential customer who has little to say in response. A man comes out from behind the gate they are standing in front of and moves his hands about oddly, then leads the “customer” inside, revealing to the audience (and Laurel) the fact that this is an institution for the “deaf and dumb.” An older woman (Joy Winthrop) comes out and Laurel makes rather more convincing sign language at her as she stares uncomprehendingly, then she starts talking a mile a minute, making it impossible for Stanley to get a word in edgewise. He tries to get away from this pest, but she follows, running surprisingly fast for a woman in a dress that doesn’t allow for much leg movement (a dolly shot follows them from the back of a car or truck, to allow the chase to go as far as possible in the street). 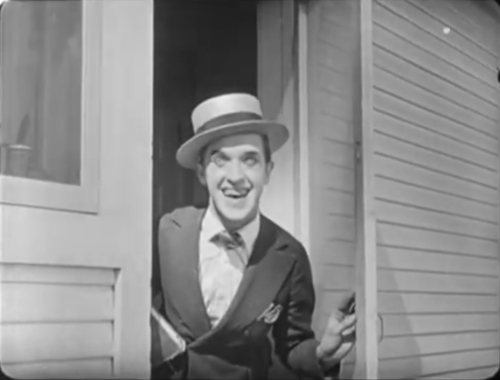 The scene now cuts to the inside of a house where a young girl (Vera Reynolds) is being hassled by her landlord (Glen Cavender) for the back rent. In the classic melodramatic plot development, he offers to forgive the rent if she will marry him, something she obviously regards as a terrible fate. We now see the Pest approaching her sister’s house by means of a truly enormous flight of stairs. Laurel, unknowing, also decides to try selling his biographies at the top of this staircase. He runs up the stairs, thus they both arrive at the same time, and she concludes he is following her and lets loose with another bout of verbosity. Laurel decides the smart move is retreat, and he slides all the way back down the stairs to the bottom (undercranked for comic effect). He approaches another corner and, unable to decide which way to go next, he asks a stranger to borrow a coin to flip. He promptly drops it in a sewer grate, then runs away, the decision made by the necessity of escape. 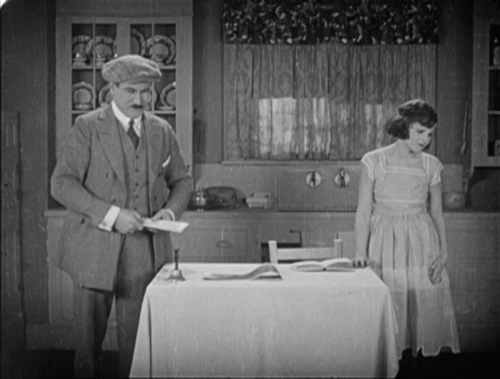 He knocks at another door, and the Pest glares at him from a second-story window as an angry-looking man comes out to see who knocked. A dog barks at him and he rushes off, frightened, leaving the man to be drenched by the basin of water the Pest has poured out to discourage Stanley. Another funny bit occurs, after a few more minor mishaps, when he decides to ring four doorbells at once on an apartment house and gives a performance to all four of the women who answer, having the door slammed in his face and then getting confused between a dwarf and a giant who live in one of the apartments. 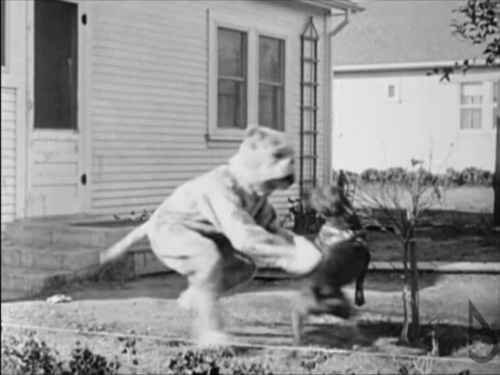 The second half of the film (roughly one reel) moves into the plot about the girl with the villainous landlord. Stanley encounters her and instantly feels for her plight. He vows to get her the money to pay her rent before noon. However, he is hindered in his quest by her dog (which an intertitle tells us “dislikes book agents”), and he spends a good deal of time trying to leave by one door or another. In crossing back and forth through her house, he encounters what seems to be a bearskin rug (or a lion, or perhaps it’s a large dog…) He puts this on and tries to fool the dog by acting like a larger animal, but the dog is just as aggressive toward him in the outfit as out of it. It does seem to fool the local dog-catchers, however, who pursue Stanley through the streets in this outrageous costume, which he keeps trying to remove. Finally, he is able to get out of it by having one dogcatcher pull his tail and the other on the head. In a gag apparently lifted straight out of “Day Dreams,” he now goes to a used clothing store to get a new jacket and just happens to take one that a thief has hidden a stolen wallet inside! With this unexpected windfall, he goes back to the girl’s house just in time to give the money to the landlord and prevent her dishonor. 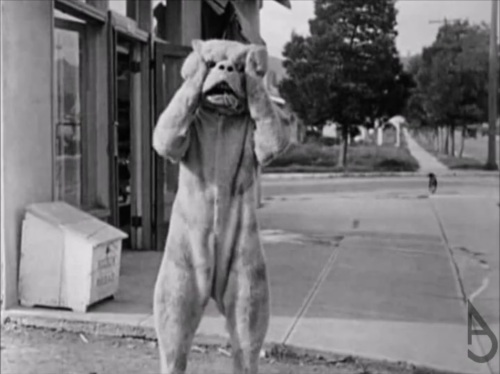 Like a lot of the two-reel comedies of the period, this movie seems to try to be two movies in one. The first reel basically is the story of Stanley’s encounter with “the Pest” and his efforts to sell a Napoleon biography. The second reel is the melodramatic staple of the young girl who will have to marry the landlord if she doesn’t produce the rent. The two don’t gel particularly well, but I think Gilbert Anderson deserves a little credit for using some quick edits early in the first reel to set up the plot of the second, which I’ve rarely seen in similarly-structured films from Mack Sennett or Roscoe Arbuckle. This also has the (unintended?) effect of making the audience expect the girl to be behind each new door Stanley knocks on, which keeps us off balance and heightens the humor of the unexpected gags that come instead. 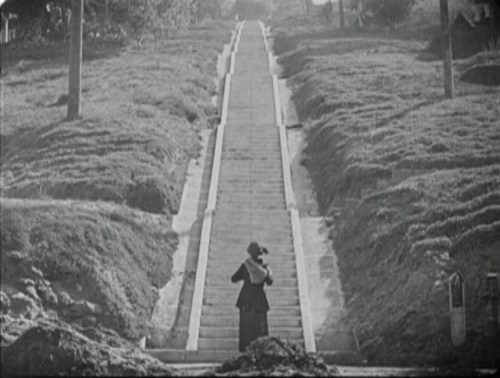 It’s hard to tell how much involvement Laurel had with the creative process here. This character has little in common with his now-iconic role, but that character would make little sense outside of the context of his partnership with Oliver Hardy. It seems like maybe he’s going for a likeable Harold Lloyd-type character (the straw hat reminds me of him), though at times (when he’s getting ready to hit the midget, for example) he doesn’t come off as entirely a “nice” guy. What his performance really has going for it is a lot of high energy movement with plenty of pratfalls and occasional eyelash-fluttering bids for sympathy. Fans of his later work will have a moment’s pause, however, when the Pest ascends (and then Laurel rapidly descends) a staircase that appears to be the same location as that used in their later movie “The Music Box.” That movie won them an Academy Award, and the location is crucial to making the comedy work. These stairs are more incidental, whether they are the same or not (those stairs are located today near what is called “Laurel and Hardy Park” in Los Angeles and have a street sign indicating them as “the Music Box Steps”). Perhaps Laurel felt that the potential comedy of a long flight of stairs had been missed, and needed to by exploited more fully in later years.