This simple short by Georges Méliès eschews trick photography and emphasizes slapstick humor, to the point of degenerating into a riot by the end. As with “The Colonel’s Shower Bath,” the butt of the humor is the military, especially the officer class.

The movie takes place on a set designed to look like an urban European street corner. A sign behind a character dressed in uniform reads “Corps de Garde,” indicating that the building is a barracks. The soldier character marches back and forth while a man has his shoes shined by another. The civilians leave and the soldier stretches out to rest. Propping himself on his rifle, he begins to snooze. A glazier walks by with glass frames balanced on his back and then a man pulls a hose across the set, apparently preparing to spray the sidewalk. Another man with a ladder props it up over the soldier and climbs up to a high gas lamp with a rag. A man dressed a bit like a modern jester runs up and looks impish as he assesses the scene of the ladder, the hose, and the sleeping soldier. He gently removes the man’s rifle and replaces it with the hose. Then he sneaks offscreen until an officer walks by. When the officer upbraids the guard for sleeping, he turns on the hose, which sprays the man working over his head. The officer winds up getting the lamp cage dropped on his head and soon the worker is tussling with the soldier, grabbing his rifle and smashing in one of the windows. When the occupants protest, the worker picks up the still-spraying hose and douses them in water. Soon police officers run up to gain control of the situation, but the result is more mayhem and water spraying everywhere. The soldier ducks into the barracks and the worker climbs up to the second floor and enters via a window. The police attempt to follow, but the worker and the prankster drag out an advertising column and topple it, blocking the entrance to the barracks. All of the characters crowd on stage and wave their arms about in distress, the social order completely upended. 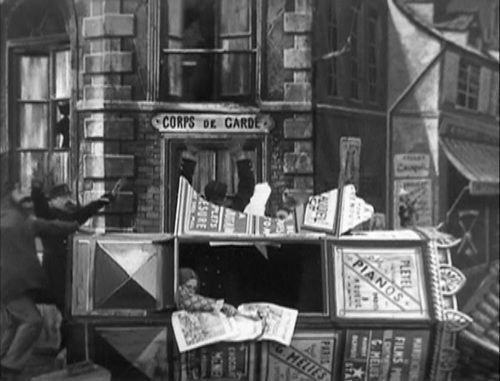 Méliès prefigures Mack Sennett by almost a decade here with physical humor that targets soldiers and police, and reduces a city street to complete anarchy in the name of a few chuckles. The use of the hose may have been the most challenging aspect of the production – the sets are pretty obviously painted cardboard with flimsy wood frames and the actors have to avoid pointing it at walls for fear the water will cut right through them. Even so, the upper window frame does get wet and an apparently “stone wall” sags as the worker climbs in to the upper story. A quick edit gave Méliès a chance to repair the damage before things went too far, but otherwise this movie is made in single takes, as is typical of his work. Sharp-eyed viewer will notice that several of the ads on the column are for Méliès films and the Theatre Houdin -an early form of product placement. Another area in which Méliès was an innovator, one can also see ads for Pleyel Pianos and Menier Chocolate who presumably paid for the advertising.