This comedy feature from Douglas Fairbanks lampoons superstition and psychiatry in equal measure, also dealing (as did “Flirting with Fate”) with the dark topic of suicide in a comedic fashion. As always, Doug gets through the shaky premise with athletics, optimism, and “pep.” 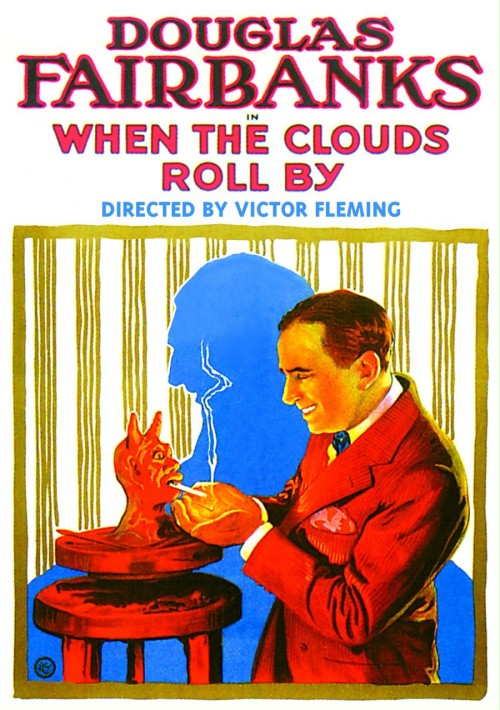 Doug plays “Daniel Boone Brown,” a poor sap who has been chosen by Dr. Metz (Herbert Grimwood), an unscrupulous scientist, as the subject of an experiment to see whether a human being can be killed by his mind alone. For months he has been encouraging all doubts and fears in him, and now he announces his experiment to an academic conference, urging his listeners to keep it a secret. We now see poor Doug, who is being served an onion, a lobster, Welsh rarebit, and a slice of mince pie at midnight to give him indigestion and bad dreams by his servant, who is in on the scheme. As he eats each of these ill-advised foods, we see a depiction of his stomach, with the foods dancing about inside. Of course, he has a terrible night and wakes up late for work. In his dreams he is pursued by a ghostly man with huge forearms, he passes through a room full of women in his nightclothes, and he runs around the walls of a room, as Fred Astaire would do in “Royal Wedding” many years later. 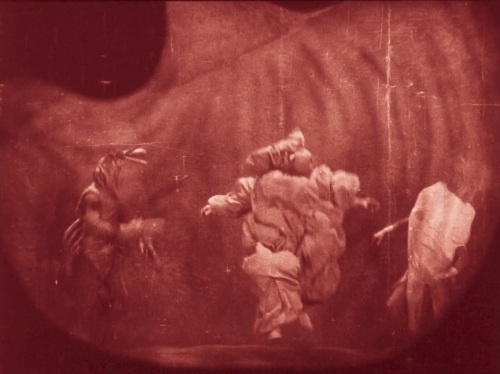 The next morning, his boss, an uncle who runs an investment business, is furious and phones him at home to tell him his job is at stake if he doesn’t get to the office soon. Everything conspires to stop him, helped by his compulsive need to avoid “bad luck” and act on opportunities to promote “good luck.” He winds up flooding his bathroom and the apartment of the downstairs neighbor, and has to sneak past the apartment manager, also a part of the conspiracy. His uncle does fire him, and he goes out in despair, wandering a park, where he meets Greenwich Village artist Lucette Bancroft (Kathleen Clifford), to discover that she is just as obsessed with superstition as he is. It turns out that she is from Oklahoma, and that a crooked Western real estate developer (Frank Campeau) is involved in a deal with Doug’s uncle to swindle her father. They decide to re-hire Doug and send him out West, knowing that he will not give away the scheme. The crook is also trying to get Lucette to marry him, and he visits her while Doug is there, causing him to fear losing her. 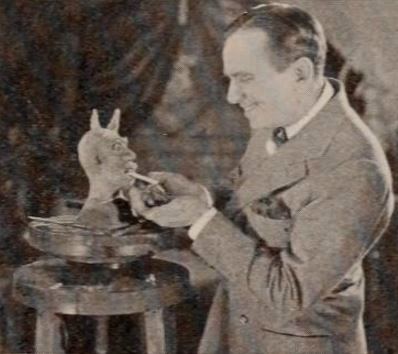 The doctor does his best to play on this fear, hoping to goad Doug to suicide, and also instructs his agent to prevent Doug doing his job. Realizing that they are both rivals for the same girl, he decides to bring them together in the hope of creating conflict. The agent gets the cooks drunk at a dinner party planned to announce the engagement, and the crook sees Lucette in her wedding finery while Doug deals with the brawl in the kitchen. The crook uses his insider knowledge to make it look like Doug is the one ripping off her father, and she agrees to go back to Oklahoma with him. His uncle fires him again, the police show up due to noise complaints, and he reaches the depths of despair. We see a depiction of the inside of his mind, with Reason and Humor, represented by young women. tormented by a storm, with the demons Worry and Jealousy torturing them. Doug staggers about his house hopelessly, seeking solace from Dr. Metz, the last man he should trust. Dr. Metz slips a gun in his pocket, sure he will finally kill himself when he finds it. 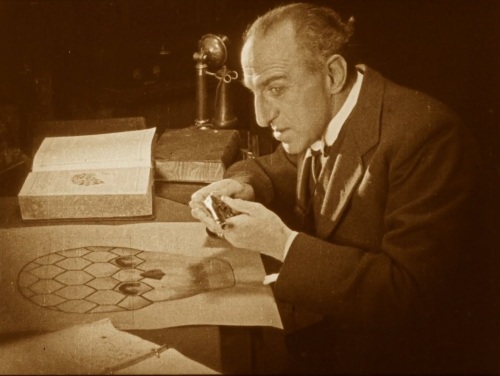 However, the tables are turned when Doug rushes out to try to catch Lucette at the ferry, and it seems he may finally do the deed, but when an attendant from an insane asylum arrests Dr. Metz instead, he suddenly realizes how he has been led astray, and makes a heroic effort to catch up with Lucette – as Sense of Humor, suddenly revives and beats the demons in his brain, causing him to burst out laughing. First he swipes a badge from one of the attendants, then tells a tugboat captain that he needs to catch up with his girl, which is good enough for him, so they pursue the ferry. The ferry meets the train, and Doug is too late, so he leaps on top of the train from a bridge and then convinces the conductor to help him put the “crazy” crook into isolation with his badge. Soon, Doug is alone with Lucette, but she still won’t listen to him. However, when a flood wrecks the train, he is able to get the document that proves who the swindler was, and saves a lot of passengers by helping them up into a tree higher than the floodwater. He sees Lucette the next morning on top of a house and shows her his proof and makes her breakfast by swimming to the kitchen. A preacher floats by on top of his church and they are married at the end. 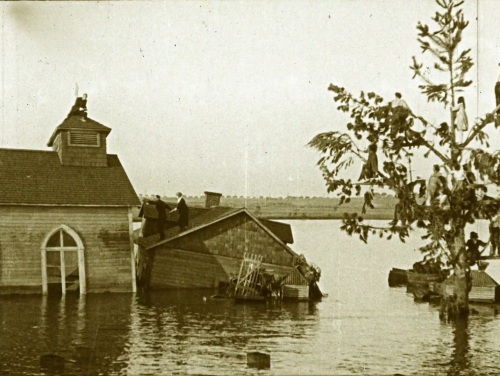 This movie, which was unavailable for quite some time, has been praised by Jeffrey Vance as “the best” of Fairbanks’ comedies from the period. It definitely packs in a lot of what Fairbanks fans are looking for. Lots of fast motion, physical exertion, and clever frustrations that seem to crop up each time the star begins to try something. There’ a great bit where Doug, trying to amuse his uncle to get him to forget he’s come in late, uses a coat on a hangar and a hat in his hand to imitate a man looking at a map. The “man” keeps looking higher and higher up on the map until he seems to have grown to eight or nine feet tall, then suddenly shrinks down to a dwarf. It serves little purpose to the plot, but is great fun for the audience to watch. And then there’s all the stunts. Fairbanks climbs the side of a building, leaps onto a horse’s back, hangs from his feet, and pulls people out of the water into a tree, among many other physical feats. 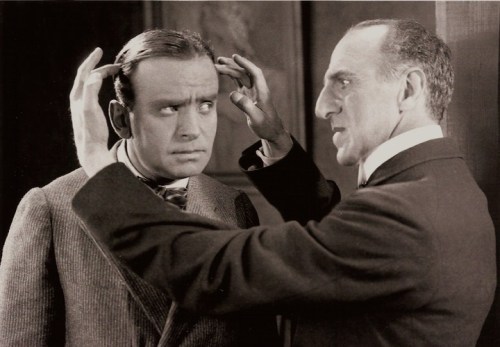 The story (though not the script) is credited to Fairbanks, and in addition to giving him lots of chances to show off physically, I suspect it also reflects some of his philosophy of life. Superstition is dangerous, according to Doug, because it gives you things to worry over and keeps you from acting boldly and taking control of your life. Note, however, that it isn’t “Action” or “Courage,” or even “Truth” that pulls Worry off the throne of Reason, it’s Sense of Humor. Sense of Humor is Doug in a jester’s suit, and he’s able to stop an axe-wielding demon of Despair just through his speed and pep. When his character laughs at himself is when he finally is able to Do what has to be Done. There’s also a minor scene in which Doug and the girl do a reading with a Ouija Board that I found interesting. First of all, it looks like pretty much the same board that Hasbro/Parker Bros would trademark in the forties, raising the question of whether there’s any justification for their claiming intellectual property rights on the design. Secondly, here Doug seems to forget his disdain for superstition as his character uses the board as a way to get close to the girl and find out if she’s engaged. Superstition’s OK when it promotes Love, I guess. 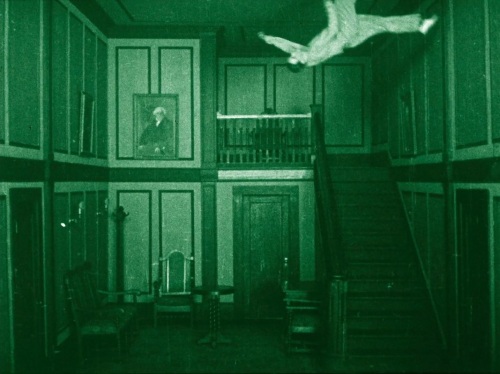 The really interesting effects in this movie mostly involve the dream sequence and the big storm at the end. I was pretty impressed with Doug walking on the walls – it could only have been accomplished with a camera locked down on a platform that rotated with the room. At one point, the demons of his bad food stalk him on the “floor” while he stands on the “ceiling,” requiring multiple exposures, but it looks sharp and clear, unlike the semi-transparent images that plagued George Méliès’ multiple exposure efforts. The storm and flood are huge, requiring a great deal of water and real estate to pull off, and surely cost a lot by 1919 standards. If you enjoy Douglas Fairbanks as a comedic action hero, which is what he was before he transitioned to period/costume action star, you won’t do better than this one.