Having taken the world by storm with their projected motion pictures in 1895, the Lumière brothers quickly dispatched cameras to far points of the world, eager to get images that would be exotic or exciting for audiences at home and abroad. This one comes from New York City, and is a rather idiosyncratic view of a still-famous structure. 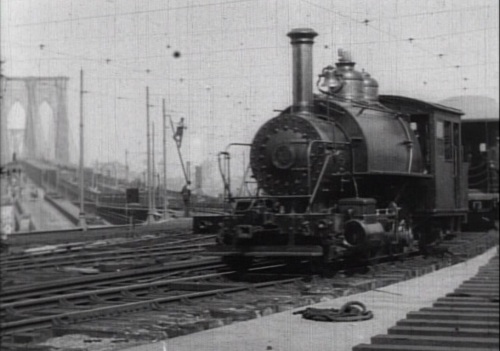 The camera is set up on train tracks, facing a stationary engine and a small building. A train approaches, turning to exit screen left. As it does so, it blocks the one recognizable arch from the bridge in the distance. Soon other trains cross our view, one quite close to the camera is being driven “backward,” with the engine behind the other cars. These appear to be commuter trains, with people sitting in the coaches. A workman on a ladder is on the other side of the tracks, and at times he seems to look at the camera. It is impossible to tell which side of the East River this image was taken from, but it appears to be at the point where the tracks are turning toward the bridge, not actually on the bridge itself.

Today, we don’t think of the Brooklyn Bridge being for trains. The upper level is largely for pedestrian and bicycle traffic, and below that is roadway for cars. Even buses and trucks don’t cross the bridge anymore, it isn’t used for public transit, just personal transportation. This was not always the case, however, as we see here. It’s surprising that the photographer felt that this view was the best way to show the bridge, since the trains block its most recognizable features for much of the run time. There isn’t a lot to distinguish this from “Arrival of a Train at La Ciotat” or dozens of similar train movies from the nineteenth century, but presumably audience demand was high for this type of film, and getting the famous bridge was a secondary concern.