D.W. Griffith was finishing up his Artcraft contract, preparing to make the shift over to celebrity-owned United Artists, when he put out this homey tale of rustic romance. It shows a number of his strengths as a director, more I think than the great “spectacles” with which he is associated today, though it has its underside of weirdness, like all his movies.

The movie starts, as we expect from Griffith, with intertitles filled with bombastic claims and purple prose. The entire movie is “taken from real life” and will explore whether men are more motivated by the appearance of women or by their “true heart.” The first images show us the bucolic homes of William Jenkins (Robert Harron) and Susie Trueheart (Lillian Gish), who have grown up just across the road from one another. We see them at school, and when William can’t spell “anonymous” but Susie can, she goes to the head of the class. It develops that Susie has a big crush on William, to which he is completely oblivious, but nonetheless Susie interprets his words and actions to mean that he is also harboring love for her and they are destined to be married. Based on this, when he desires to go to college, she sells her beloved cow and various other farmyard resources in order to secretly sponsor him, pretending that the money comes from a foppish swell that passes through town one day and notices William for all of a second or two.

A Tale of Two Houses

William, the backwoods bumpkin, has a hard time getting started in school, until he licks one of the other boys in a fight for calling him “butter” (because he works as a kind of waiter for their dorm). Soon, however, he has grown a mustache and started hanging out with the cool kids, which puts him in better standing with local beauty Bettina (Clarine Seymour) when he comes back to town. Bettina is a bit of a wild child, liking to drink and stay out late, and she wears “paints and powders” in Griffith’s terms (fairly moderate makeup, by our standards), which draws William to her despite his protestations that he wants a “plain girl.” Upon finishing school, he becomes a minister, and also has some success getting stories published, so Bettina thinks he will make a good prospect for marriage, and he gets the idea that she will conform to his ideal of plain living. Thus, Susie’s heart is broken, but she still remains loyal and acts as a bridesmaid at their wedding.

It doesn’t take long for William to begin to realize that married life isn’t everything he was hoping. Bettina doesn’t look her flashy self when she rolls out of bed in the morning with her curlers on, and Griffith uses one of his inter-cut contrast sequences to show Susie skillfully rolling out dough and preparing pastries while Bettina serves William cold cuts on a plate – again. Bettina isn’t thrilled with the placidity of being married to a minister, either, and she begins sneaking out with her old gang for good times after dark. Meanwhile, Susie is still pining away, making occasional deletions from her old diary as she realizes that the predicted wedding day is no longer coming, and mooning about her aunt’s house. She goes to destroy the five letters that William condescended to send her while at school, and he sees her with them, concluding they must be love letters from a new beau. He warns her to “be sure you get the right one” before getting married, and his eyes glaze over as he contemplates the hell his life has become. 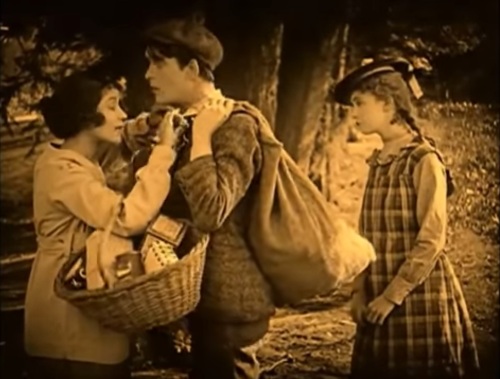 One night, Bettina uses the excuse of going to pick up a copy of William’s book as an excuse to go dancing late, but manages to lose her key and get trapped in the rain. Desperate, she runs to Susie’s house and convinces her to cover for her so William won’t get mad. Susie does, as much to protect William’s feelings as hers, but she contracts pneumonia from being out in the rain and slowly wastes away. She tries to confess on her death bed, but William won’t listen, so “she dies as she had lived – a little bit unfaithful” as Griffith’s intertitle has it. Having botched a first marriage so badly, William makes the sensible vow never to wed again, unaware that he is once again hurting Susie in the process. Susie’s aunt (Loyola O’Connor) finally comes over and tells him that Susie was the one who paid for him to go to college and has always loved him. He would still keep his vow, until one of Bettina’s friends (Carol Dempster) stops by and gives away that she died only after partying all night. At last, he feels released from his obligation. He goes over to Susie’s house, speaking to her through the window, framed for much of the time as a silhouette, and he proposes. Susie leans forward for a kiss, but all she gets is a very chaste hug until the very end, perhaps a portent of what is to come in their relationship.

This is a pretty effective romance. I’ve long felt that Griffith was at his best dealing with intimacy and human interest, and the more he got away from making grandiose statements, the better he was as an artist (although he can’t seem to stop drawing broad conclusions from his little anecdotes). I was a little surprised when Harron and Seymour actually got married, since later Hollywood so adamantly avoided any hint of serial monogamy, though Bettina’s death did free William from lifelong chastity (we hope). It’s funny that Gish is also obviously wearing makeup when Griffith rails against “powdered and painted” women, although her dresses are consistently less showy than Seymour’s. At one point she gets ready to try going out in a flashy dress, but O’Connor steps in as the spinster aunt and shames her.

Gish’s expression, for much of the movie.

Like a lot of romances, the story hinges on the characters being profoundly stupid. William is dense from the first moment when he loses the spelling bee, but it’s really hard to believe that he could be dumb enough to think that Bettina would make a good parson’s wife. Susie is smarter than him, but lacks the simple courage to risk saying “I love you” and be rejected outright, carrying a torch in secret for years – but this is precisely the kind of stupidity that makes for good romance. Bettina is dumb to think she’ll be happy with William, dumb to keep her personal fun secret, and really dumb to lose her key and get stuck in the rain. Since she has no kids, I guess she gets a Darwin Award for that last one.

It’s worrying in some way that Susie has to coax William into the final kiss, when he seemed content with a little hug, but this movie gets weirder when you bring in the context of Griffith and Gish’s relationship. There’s little doubt that they had been lovers at some point (though the length and depth of that affair is disputed), and that Gish remained loyal to him, at least to the extent of never saying a word against him, for the rest of her life, but at about this time he threw her over (possibly not for the first time) and replaced her with a new star named Carol Dempster. Dempster has been treated unkindly by critics and biographers in the years since, but there’s not enough of her in this movie to make any judgment of her abilities – she’s a bit plain-looking to be in the “flashy” crowd, but actually they all are. What is creepy is the way the movie seems to predict what will happen to Gish in the coming years, and to promise her that her loyalty will ultimately be rewarded. Griffith seems to be saying to her, as William does to Susie, “that’s not the kind of girl men marry,” even as he shows that not to be the case. It’s impossible to know what Gish thought of this, but thinking of it made her pining for Harron seem all the more poignant to this viewer.