This is a short comedy from Pathé Freres that decidedly reminds me of the work I’ve seen that Alice Guy was doing at this time. It is based on a simple gag, taken to improbable, almost surreal, extremes. 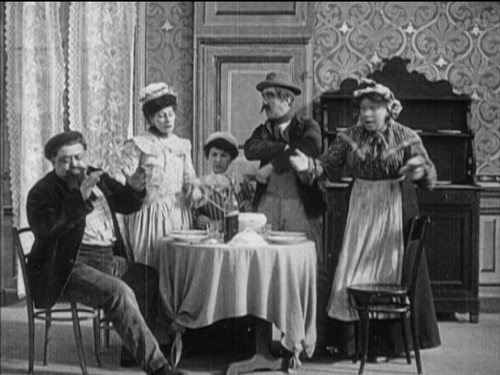 We open on a shot of a bourgeois Paris apartment, with a table set in the center of the screen, a middle-aged couple and their maid is preparing dinner. The door at the back of the set is opened to allow another couple to enter, and after brief greetings are exchanged, people begin to settle in for the meal. Now the hostess goes to a cupboard at the back, and produces a tiny crust of bread – apparently she forgot to make sure there was bread for company! Everyone looks flustered until the man of the house agrees to go out and get some more. We next see him emerge from a bakery with a prodigious loaf of bread. He runs down the street, but stops at a wine bar for a quick nip. After finishing the bottle, he moves on to a restaurant for another drink. His escapades are intercut occasionally with shots of the hungry group at home, waiting for the bread to arrive. Eventually, the male guest agrees to take on the task and get some bread, but he, too, keeps stopping at local watering holes of various description. The editing structure now alternates between the two men and their adventures, with each growing drunker and more incapable as they proceed. Eventually, the two encounter one another, hopelessly inebriated, at an outdoor café. Inevitably, the bread is dropped and trod upon. The two men finally stumble back into the apartment, to be reproved and abused by their wives. 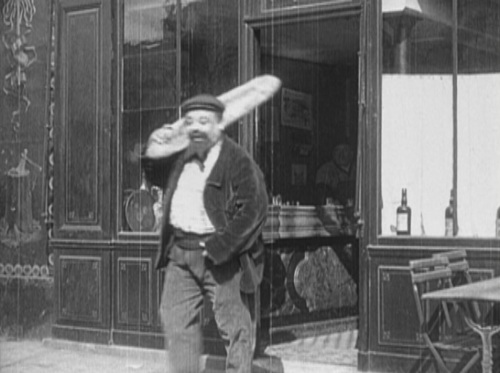 This movie follows a similar pattern to the chase movies that were common at the time, with a single camera setup for each scene which the actors move through in a predictable pattern, until the final crash comes at the end. In this case, most of the shots are taken from the fronts of businesses, each time set up so that we see little of the street or surrounding buildings, but can plainly see the front door and action immediately behind it. I was a bit surprised at the number of separate camera setups at first, but when compared to a chase like “How a French Nobleman Got A Wife” from this time period, it is not unusual. The editing is somewhat advanced, in that we do cut away from scenes to see simultaneous action and then return to complete the scene, rather than having each shot show the beginning, middle, and end of a scene, something that would be more common in typical chase movies. The joke is a bit strained – evidently it is not safe to send a man out unsupervised to run a simple errand, because he will be too distracted by alcohol – but the movie works because it fulfills the audience’s expectations, including our expectations that the naughty husbands will be punished.