The Coronation of Edward VII

This film from Georges Méliès is another of his recreations of events in the headlines. In this case, the ascension of a new Monarch of the United Kingdom is an opportunity for Méliès to show respect and honor his cousins across the Channel – an appropriate sentiment for a D-Day post (even if Méliès wouldn’t live to see D-Day). 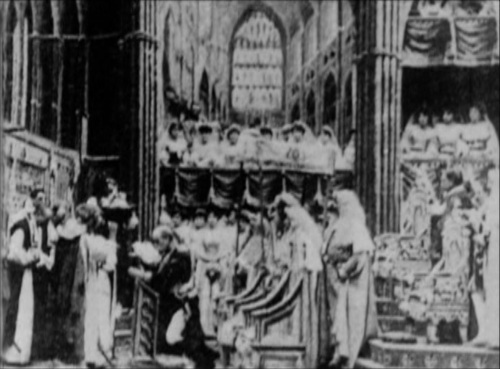 The set is an elaborate and realistic (by Méliès standards) depiction of a section of Westminster Abbey, with many extras representing clergy and nobles who would have attended the event. A man in especially fine looking regalia (Edward) comes forward and kneels to the Archbishop, then footmen remove some of his robes. He is seated at a lower chair in front, then some words are spoken over him and he kneels again in prayer. His sword is presented to him and this he gives to the Archbishop to bless. A new, very long robe is placed over his shoulders and he takes his seat again, to be presented with an orb and a scepter. Soon the crown is placed on his head, and suddenly everyone in the audience places their crowns or headgear on as well. Now crowned, he moves to an upper throne, and his Queen joins him at a slightly lower throne. The film we have today cuts off as other officials take their positions.

Because of the long life of his mother, Queen Victoria I, Edward VII was over sixty by the time this coronation occurred, and his reign would only last until his death in 1910. Victoria was seen as the definition of an era and an empire, and her death and Edward’s accession dominated world news at the time. Although his reign officially began in 1901, the coronation was delayed (in part due to his health) until August 1902, presumably about the time Méliès produced this. Méliès knew his audience would read about the coronation in the papers, and he obviously went to some effort to make his reenactment look as authentic as possible. There is no trick photography, none of his whimsical set design or props, everything is made to look as real as his small set will allow. There are some moments when the crowded nature of the set forces the Archbishop of Canterbury to make some delicate maneuvers to avoid crushing set pieces, but apart from that the illusion is quite convincing, at least on the grainy print I was able to watch. This realistic, current events work aligns with “The Dreyfus Affair” series to remind us of another, more realistic Méliès tradition.