This down-homey piece of Americana reflects the values that movie audiences responded to in the immediate post-war era. It also gives Richard Barthelmess a starring vehicle in which we can see his real face, unlike “Broken Blossoms” where he was under Yellowface. 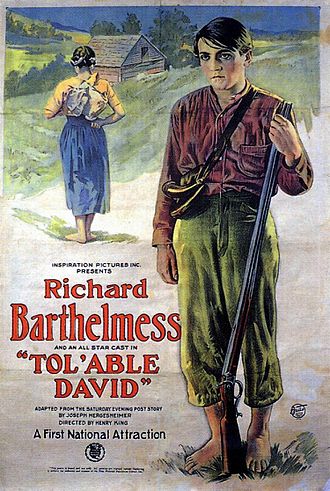 The movie begins by introducing the Kinemon family, salt-of-the-Earth types in a small village somewhere near West Virginia. Warner Richmond is Allan, the favored older son who drives the mail for the local general store owner – an important mark of social success. Barthelmess is David, the younger son, who is pampered by his mother, who describes him as “just tol’able,” not great. Older brother is already married and his wife is expecting, while David frolics in the lake with a little dog, only to have his clothes stolen, resulting in a humorous encounter with the girl-next-door, Esther Hatburn (played by Gladys Hulette). Esther seems to be interested in David, but he is painfully shy. At breakfast, David offers to drive the carriage (called “the hack”) for Allan, but Allan scoffs that he is too young for such a responsible role. We see Allan get the hack ready and take it off down the road, with a local child running alongside. We also see “pa” ignore his wife’s advice to take his work easy because of concern over his health.

Now, the adversaries are introduced as three Hatburn cousins (Ralph Yearsley, Walter P. Lewis and the titanic Ernest Torrence) who make it over the State line ahead of a posse organized to bring them to justice. They go to see their relations – it turns out that Esther lives alone with her grandfather (Forrest Robinson) – and they are readily able to impose on his familial goodwill or just his fear of what they might do if refused, to obtain indefinite lodgings on the property. Cousin Luke stares open-mouthed with a mouthful of turnip at Esther, adding to the impression that this is not a safe living arrangement, and soon after he stalks a kitten, apparently just because he likes to kill things. Said kitty is able to get away, only to be chased again by David’s dog, who disturbs the cousins, who then scold David and tell him to keep away. David is visibly terrified, but talks tough in front of Esther.

Meanwhile, Allan, in a hurry to get to see his newborn child, is driving the hack faster than he ought, along the road right past the Hatburns. He brings the passengers to his home and passes out glasses of corn whiskey, which David is denied. One of the passengers hands out cigars, which David is also excluded from. The doctor takes a moment to chide Pa about his heart, and David holds the baby and is swept up in the love for his family. The bliss is broken shortly, however, when the dog leaps from the hack into the Hatburn place and is killed by one of the cousins. Allan goes to confront them, warning them that he’ll come back when the mail is delivered, and Luke throws a rock at his back, striking him down in dubious “self defense.” The passengers take him home, and the doctor declares that he will be an invalid for life. The whole family is shaken, and the young mother nurses her baby staring straight ahead, a blank expression on her face. Not being the sort to run to Law, Pa Kinemon sends the hack away and gets his rifle. David emulates him but as always, is told he is too young to do the man’s job. This time he rebels, triggering a heart attack in his father, extending the shadow of grief over the family.

Now under the domination of his stricken mother, David is prevented from enacting revenge, and the family suffers. His one petty act of frustrated rage is to spurn Esther, who he had previously promised to help if things got ugly with the cousins. The only work the store owner will give him is sweeping up and stocking shelves. He hires a drunk to drive the hack, and David fears that everyone in town thinks he is a coward for not taking his revenge on the Hatburns. He sulks outside of a country dance, peeking in the windows, until Esther comes out to see him. David, seeing her in her simple country dress, seems to forget his hatred of everything Hatburn and the two talk in the moonlight until her grandfather comes looking for her.

The next day, the store owner fires the drunk, who arrives for work clearly incapacitated, and he is left with no choice finally but to finally let David have his wish to drive. Unfortunately, as he goes over a bump near the Hatburn place on the way back, David loses his mail bag, which the Hatburns steal, either from spite or in hope that there is money inside. When David realizes what has happened, he returns to the Hatburn place, but in the meantime they have started abusing Esther and when he shows up unarmed, they laugh at him and shoot him in the arm. The last half hour of the movie is his struggle with the cousins, killing the father and the younger son, before fighting with Luke the giant in a battle royale that recalls the fable of David and Goliath. Esther flees for help and makes it to the village, telling onlookers that David has been killed. As a crowd prepares to go look for David, he arrives in the hack with the bag of mail, badly injured, and collapses. It is clear to all that David, no longer merely “tol’able”, is a real man and a hero. 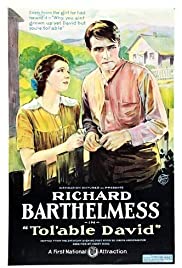 While in this movie, Barthelmess is allowed to play a person of his own race and (presumably) culture, it still seems to be a stretch to ask the audience to believe that he is as young as the script seems to demand. He does have a baby face next to Richmond, and is fairly short, especially next to the hulking Hatburns, but he still is clearly an adult, not the 12-to-15 or so that would be appropriate for a farm family to treat like a baby. Since the hack is horse-drawn, not motorized, it seems all the more silly to assert that a young man can’t handle it – it’s not like he needs a driver’s license. But, the real point of this film is negotiating what manhood is, and in that sense making an obviously grown man endure the constant humiliations of his family does serve the purpose. We can see in David the representation of young men who had “missed” serving in the First World War and were having to negotiate their own adulthood in a world that regarded them as spoiled by the prosperity that had followed. By 1921 millions of young men were trying to understand what their place was in a changing gender order, and masculinity was having one of its frequent “crises” according to some accounts. Unfortunately, according to Gail Bederman, a great many embraced white supremacy as the legitimation of their manhood, and some of the worst years in American history resulted. “Tol’able David” avoids direct comment on this, but serves to romanticize a pastoral heritage built on violence, patriarchy, and vigilantism. 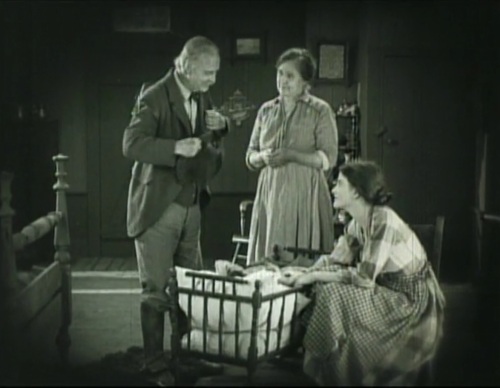 The movie definitely struck a chord, achieving commercial success and critical acclaim. It is cited to this day as one of the most influential revenge films and depictions of country life. In 1924, no less than Mary Pickford told Photoplay magazine “When I first saw this picture, I felt I was not looking at a photoplay but was really witnessing the tragedy of a family I had known all my life.” This speaks to its powerful resonance, not only among white men, but throughout American culture. Outside of the USA, V.I. Pudovkin found the movie significant for its contribution to montage in storytelling, and despite the sometimes intrusive intertitles, it is a very effective example of a constructed narrative. Like “The Birth of a Nation,” it relies on cross-cutting to heighten tension. The battle scene is divided between David’s endeavors and first, Esther’s menace by Luke, then her race to town to report on David’s death. Other scenes, including the country dance and the surprising death of the father, also rely on carefully edited sequences that draw the audience into the story. Certain images, such as the hack bouncing through a stream on its way into or out of town, become emotional place markers, that we watch for to let us know where in this very real-seeming society we are, and bringing home how much has changed since the last time that image occurred. William K. Everson, writing in American Silent Film said that director Henry King was, “[f]ar from being ahead of his time, he was exactly of his time,” and in that sense “Tol’able David” is a vital study for those of us who want to understand that time.