Charlie Chaplin’s first feature film release is a powerful concoction of slapstick, pathos, comedy, and tear-jerker, remembered to this day as a breakthrough in comedy film making. How does it stand up to a modern viewing? Let’s take a look.

The movie begins with an unwed mother (Charlie’s leading lady of many years, Edna Purviance) emerging from a “Charity Hospital” with babe in arms. She wanders into a park alone, abandoned by the ne-er-do-well father, who off-handedly tosses her photograph into the fire. Unable to care for the baby, Edna places it into a limousine parked in front of a large house, hoping to give it a good home with a wealthy family. Unbeknownst to her, however, the car is stolen seconds later by a pair of hoodlums who ditch the child in an alley when they discover it. Fortunately, he is found moments later by Charlie’s “Little Tramp” character, wandering the alleyways in search of sustenance, and after some comic attempts to pawn it off on another mother, he eventually takes it back to the dingy attic where he dwells.

A brief sequence shows how Charlie has adapted his house to his new roommate, with a baby nipple on a coffee pot providing for milk, a hammock strung up for the baby to sleep in, and a wicker chair with its seat cut out above a spittoon acting as a potty. Then we see the child five years older, played by Jackie Coogan, now a streetwise ragamuffin who avoids encounters with cops and uses a trick quarter to feed the gas meter when Charlie fixes pancakes. He and Charlie now have a “business” set up where he tosses rocks through windows and Charlie shows up with a new pane of glass, ready to sell and install on the spot. When a cop sees the two of them together, they take off, but later that very day, Charlie is installing a window for that cop’s wife (and flirting with her as well), leading to a chase through the dirty streets of their district.

Edna has since become “a star,” and receives flowers and adoring critics in her dressing room. She takes some pleasure in teasing the Black delivery boy before giving him a large coin for a tip. She happens to do charitable work in the very street where Charlie and the Kid live, drifting into a reverie as she holds a poor woman’s baby before meeting Jackie for the first time and dispensing money. A local bully picks on the Kid, but he is able to beat him despite being much smaller. That boy runs to get his grown-up brother to come back and exact revenge, and Charlie steps in, drawing the larger man’s ire. Despite Edna’s momentary interference, the fight goes on, to the fascination of the neighborhood, with Charlie winning by brains if not brawn. 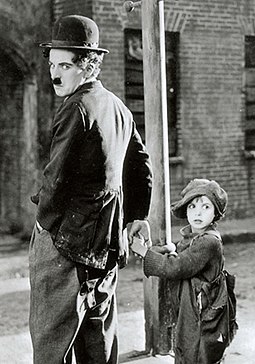 In the next sequence, the Kid has become sick, and Edna advises Charlie to get him a doctor, but the doctor feels compelled to inform the authorities that the child is being neglected, bringing in men from the orphanage to take him away from Charlie. They manage to escape, but are now on the run and unable to return home. Meanwhile, Edna has found the note she left with the baby in Charlie’s room and knows that Jackie is her child. Charlie and the Kid try to hide out in a flophouse, but the greedy proprietor sees news of a reward for the child posted in the paper, and steals Jackie while the Tramp is asleep. The reward was posted by Edna, so she is reunited with the child, but the Tramp searches frantically for the missing boy. Unsuccessful, he returns to the doorway of their humble lodgings, where he falls asleep, entering a “Dreamland” where his neighbors have turned into angels and devils. A policeman awakes him and drives him off to a mansion. There the door is opened by the Mother and the Kid, who jumps into the Tramp’s arms, and he is welcomed in. 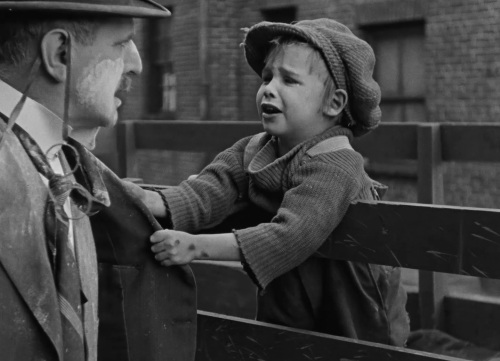 This movie is an almost perfect culmination of the work Chaplin had put into developing the sympathetic side of his character ever since “The Tramp” in 1915. Where at the beginning of his career, his slapstick violence was often random, or seemingly malicious, here it is reserved for bullies and unsympathetic authority figures – generally used in self-defense, or at least in justifiable “first strike” against an immanent threat. Giving him a small child to play off of was a stroke of genius that made certain we would identify with his plight. At the beginning, when he is trying to get rid of the child, he stops short of anything that might actually harm him: at one point he opens a sewer grate and looks down, but a glance at the baby in his care stops him from going that route. Jackie Coogan, only six years old at the time and somewhat small for his age, has a screen presence, cute yet rough around the edges, that works perfectly for his role, and makes it possible for him to keep up with Chaplin. Reportedly he loved working with Chaplin (“he was a big kid himself”) and the two have an unusual chemistry, especially given how exacting Chaplin was about his film making.

The movie also demonstrates how much Chaplin had learned in the seven years he’d been working in film. He uses all of the existing cinematic methods of the day – close-ups, insert shots, cross-cutting, parallel editing, and camera movement, to name a few – while many comedy producers at this point still seemed to feel it was adequate to set up a camera and have people run around in place. The street where much of the action takes place reminded me of the city set designed for “Easy Street,” although a good deal of the action takes place on real Los Angeles streets, but this particular set is well-suited for the extended fight sequence and controlled crowd scenes Chaplin needs. The flophouse sequence draws from (but never copies) the one from “Police.” The only sequence that doesn’t really work for me is the dream toward the end, which just seems to delay the predictable but satisfying resolution without really adding anything, except a bit of suspense as we wonder when it will get back to the real story. It’s a pretty minor distraction, considering how good everything else is, and I find I don’t spend most of the movie analyzing or anticipating, just enjoying the simplicity and effectiveness of the narrative as it goes.