This Italian short comedy reminds me of the work of Alice Guy and other Europeans at the time it came out. It’s very basic, a bit transgressive, and centers around an extended chase sequence. 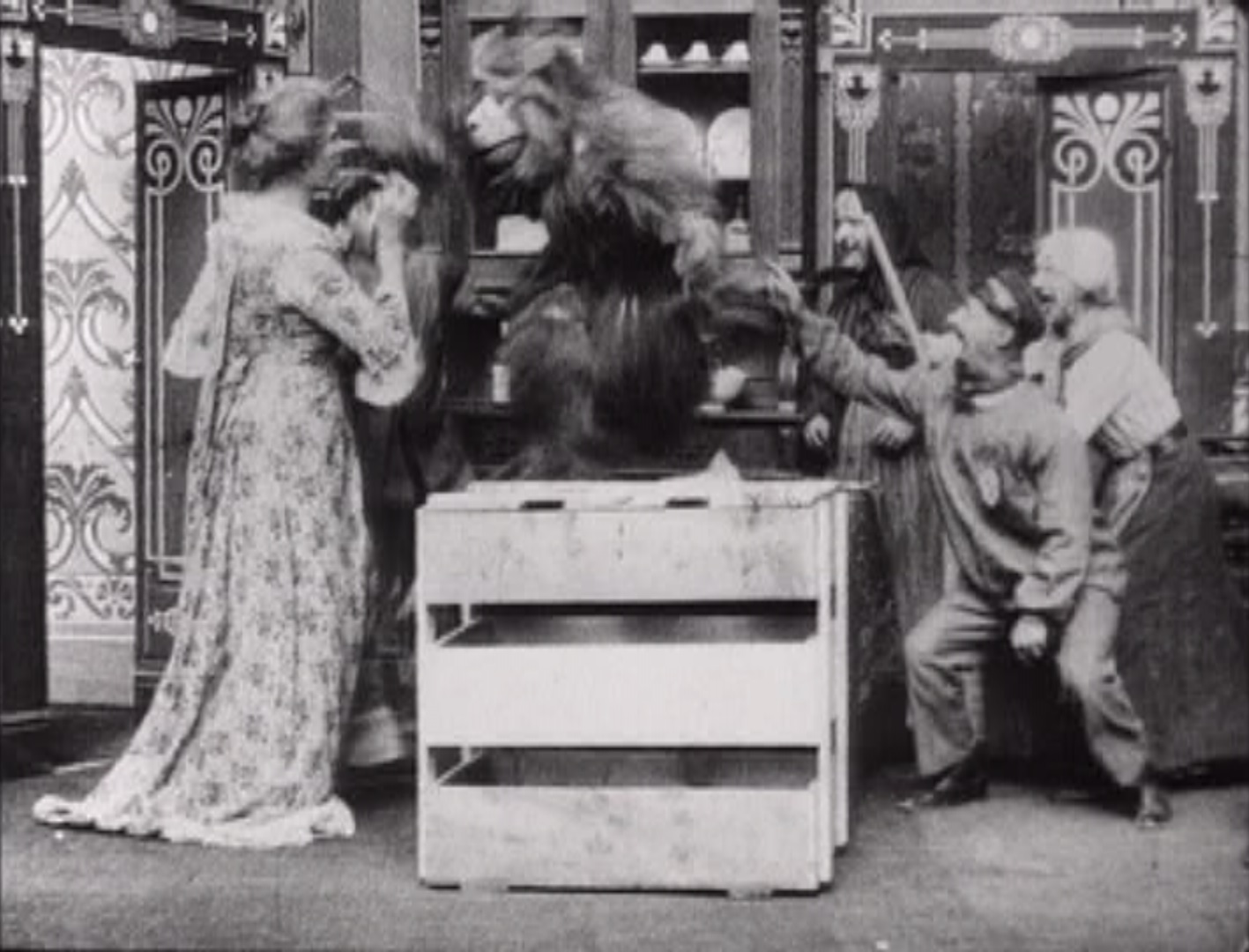 The movie begins as a pair of workmen, accompanied by household servants, bring a crate into the kitchen of a middle class home. A particularly tall woman in a long dress, apparently the mistress of the house, presides excitedly over the proceedings. The crate is open and out springs an ape – or, anyway, a man in an unconvincing orangutan suit. He jumps up and down, eventually climbing onto the counter and removing Madame’s hair – which is now revealed as a wig on her bald head! The monkey runs into the bed room and hides under the covers. When the people come in to find it, they ignore the large bump in the bed and look up into the curtains to see if it has climbed up there, but when it springs out of its hiding place, everyone is knocked down. It leaps out of the window. We now cut to the street, where a photographer is setting up to get a picture of a man and his son in front of a shop window. The gorilla runs past, spoiling the shot, and then all of the humans in pursuit knock over the camera and the subjects, causing a fight to break out. Next, the monkey leaps on top of a hansom cab, knocking over the driver, who is trampled by the crowd of pursuers. Then, the monkey runs into a wooded area (perhaps a park) and climbs a tree. Again his pursuers follow, he monkey performs some swinging stunts and for some reason this sequence is under-cranked to make the motion look faster. Eventually, the monkey returns to the ground and the chase continues.

The monkey knocks down some soldiers and some lounging fire men, who pick up ladders to bring with them in the chase. This is fortunate, because now the monkey climbs up the side of a building, and the ladders ease their pursuit. They ascend the wall, and despite occasional tumbles, are able to reach the roof, where the monkey climbs down the chimney. The humans follow, one at a time, and there is an odd shot showing the interior of the chimney as each person (and the animal) falls down toward the bottom. The monkey tumbles out through the furnace door into a basement where two men are washing something in a large tub, and soon afterward the whole crowd bursts through the wall and knocks the men over, grabbing the monkey as it splashes happily in the tub.

Parts of this film rely upon special effects, though most of it is just driven by the madcap chase. The monkey first leaps onto the wall by jumping up to a high window with bars to climb from, and this is achieved by means of reversing the film of a shot in which the man-in-the-suit had leaped down from that perch. The shot of monkey and people climbing the all was done as in “Kiriki Japanese Acrobats,” with the camera placed above the floor, shooting down, to give the illusion that the “top” of the screen was actually the higher point on the wall, and then the people pretend to be climbing when they are actually crawling. I believe the chimney-interior was handled the same way, but with the odd choice of showing a cut-out chimney, as if the camera has x-ray vision through the bricks. The bald woman appears to be played by a man, and is itself a little risqué in terms of making fun of the middle-class owner of a monkey. At any rate, this all seems about three years behind for 1909, by which time Biograph is already showing movies with cross-cut editing and more complex narratives, but it is an enjoyable example of early film comedy.