This comedy short stars Harold Lloyd in an early version of his “glasses” character and pulls together many jokes that had been around at least as long as the movies, but manages a pacing and zaniness that shows how Lloyd rose to become one of the major comedy stars of the next decade.

The movie starts out in a (still) photographer’s studio, where Bebe Daniels is annoyed by the off-hand sexual harassment of the proprietor (William Gillespie). She runs to the phone to call her large and jealous husband, who tells Gillespie that he’s coming after him, firing off his gun a couple of times to make the point. Meanwhile, Lloyd works at a nearby vegetable stand, where he presses down the scales to rip off customers and charges a “war tax” of $1 for each item. A group of policemen come up and accuse him; he tries to buy them off with produce, but winds up running into the photographer’s to hide. The photographer mistakes Harold for the husband at first, but when Harold tries to hide instead of killing him, he gets an idea. He puts Harold in charge of the shop and goes to hide in the dark room.

The next sequence of the film is a parade of silly customers to the studio, and Harold’s silly attempts to photograph them. One is an old maid (Dorothea Wolbert) who won’t stop talking, so Harold puts her face into a stand so she can’t speak, then poses her with a jug which winds up spilling all over her. He gives her a life preserver. Then a group of drunken swells come in (one of them is James Parrott). Lloyd has a hard time getting them to sit without falling over, but eventually poses them as “faith, hope and charity.” A country couple comes in, but their scene evidently was cut, as we cut back to Bebe and her husband, before seeing the “burles-queen,” who shocks Lloyd with her revealing outfit and briefly fights with janitor Snub Pollard when he tries to look up her skirt (with binoculars, no less). Snub is locked the dark room with the real photographer, but sticks Harold with a pin to escape, just as the husband charges in.  He fires his gun and now Lloyd also hides in the dark room, shoving first Pollard, then Gillespie out to confront the enraged man. A couple of fortuitous bits of crockery are hurled, forcing the husband into the dark room when a police inspector finally comes in to break it all up. Lloyd lets the husband out at the critical moment to punch the inspector, who arrests him, then embraces a quite-willing Bebe for the camera. The End. 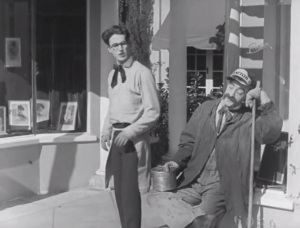 A lot of the photography jokes go right back to early Edison, Gaumont, or Lumière films, but where they would have been entire films unto themselves in those days, here they are all thrown together and run at a furious pace, keeping the laughs coming non-stop. There’s little concern in this Hal Roach picture for narrative logic, and a lot more for comedy chaos, but it has a more deliberate feeling than comparable Keystones, as if Lloyd and director Alfred J. Goulding had thought through the chaos carefully before starting. The editing is spot-on and we get multiple camera-angles within scenes as well as cross-cutting to suggest simultaneous action. In other words, state of the art for 1918, but with a devil-may-care attitude to plotting that ties it back to an earlier style of comedy as well. A great example of Lloyd’s developing comedy style, before he started hanging of the edges of buildings to get laughs.