A straightforward Western of the Nickelodeon era, this short from Essanay stars Gilbert M. Broncho Billy” Anderson in the role that he was most identified with. Once again, Billy is wronged by bad intentions, but wins the day and the girl!

The movie begins with three people seated around a table eating breakfast. Vedah Betram and Arthur Mackley play father and daughter, while Brinsley Shaw is there as a hired hand. Vedah offers Arthur more coffee and he refuses, saying it’s time to get to work. When she offers to Brinsley, he tries to become affectionate, which she politely refuses. They go off to continue looking for a vein of gold in the hills. Now, Broncho Billy rides up and politely inquires the girl about any work. She directs him to go find her father, giving him a lingering glance as he leaves. Arthur hires Billy and soon the three of them are swinging picks at a wall. That night, Billy takes out a banjo, and he and Vedah play and sing together, while the others watch. Brinsley is obviously becoming jealous, and Arthur wants to go to bed, so they move to the porch, where they are seen by a desperado (I believe this is Fred Church) who confronts Billy about we know not what, possibly the two are known to each other somehow. 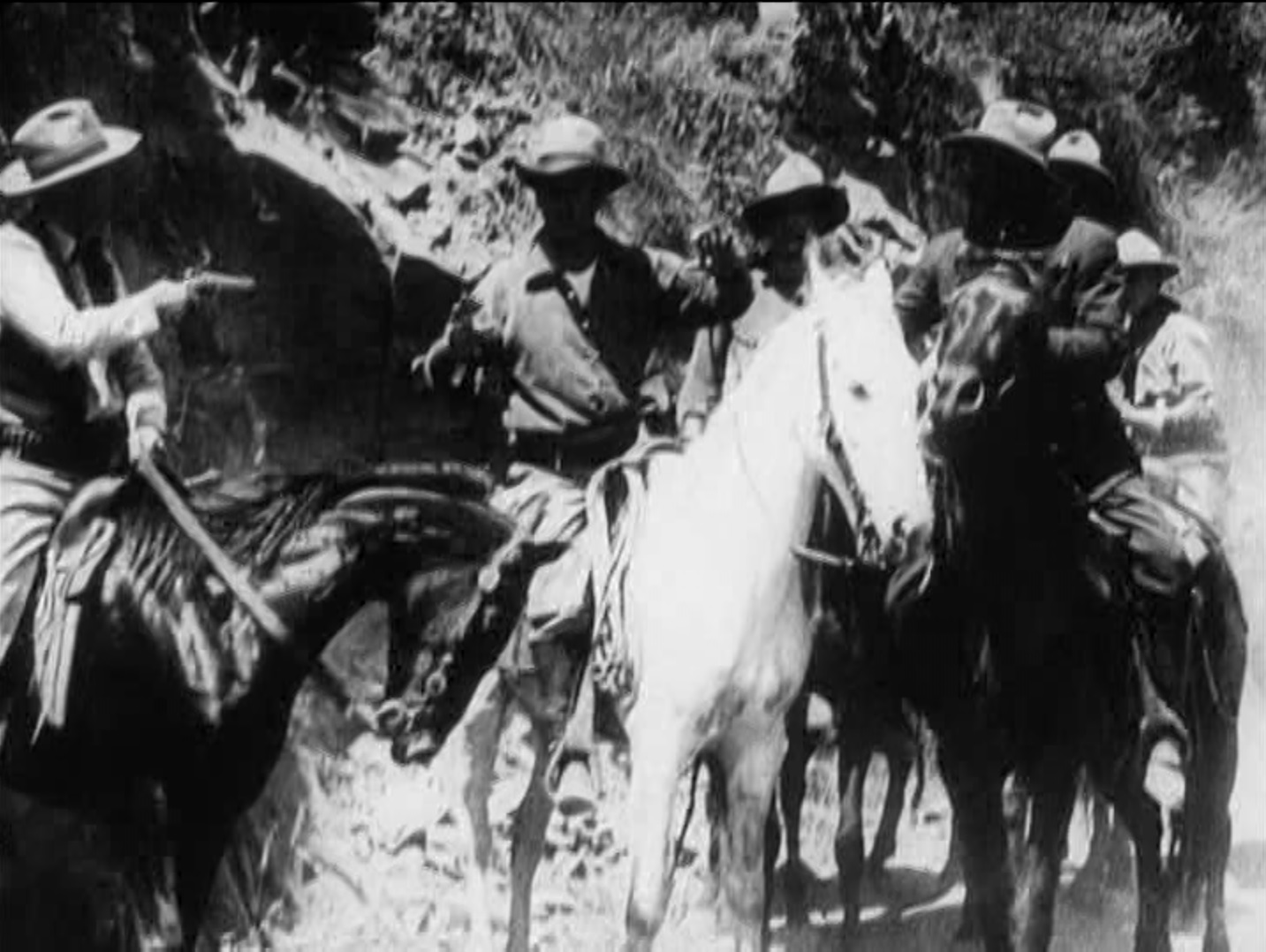 The next day, the father finds that vein of gold and sends Billy into town on a white horse with the papers that will stake his claim. Brinsley tells locals that Billy has stolen the white horse and a posse is formed. The desperado encounters them and informs them where Billy is headed, then hightails it out of town. When the posse catches up with Billy, he surrenders peaceably, but he has been instructed to tell no one of his errand, so his story sounds fishy. Brinsley tells Vedah what he has done, and she jumps on another horse and speeds into town. Just as the posse are preparing to lynch Billy, she arrives and clears things up. The last shot in the film shows the two of them leaning into the camera, bent forward with heads close together in affection. 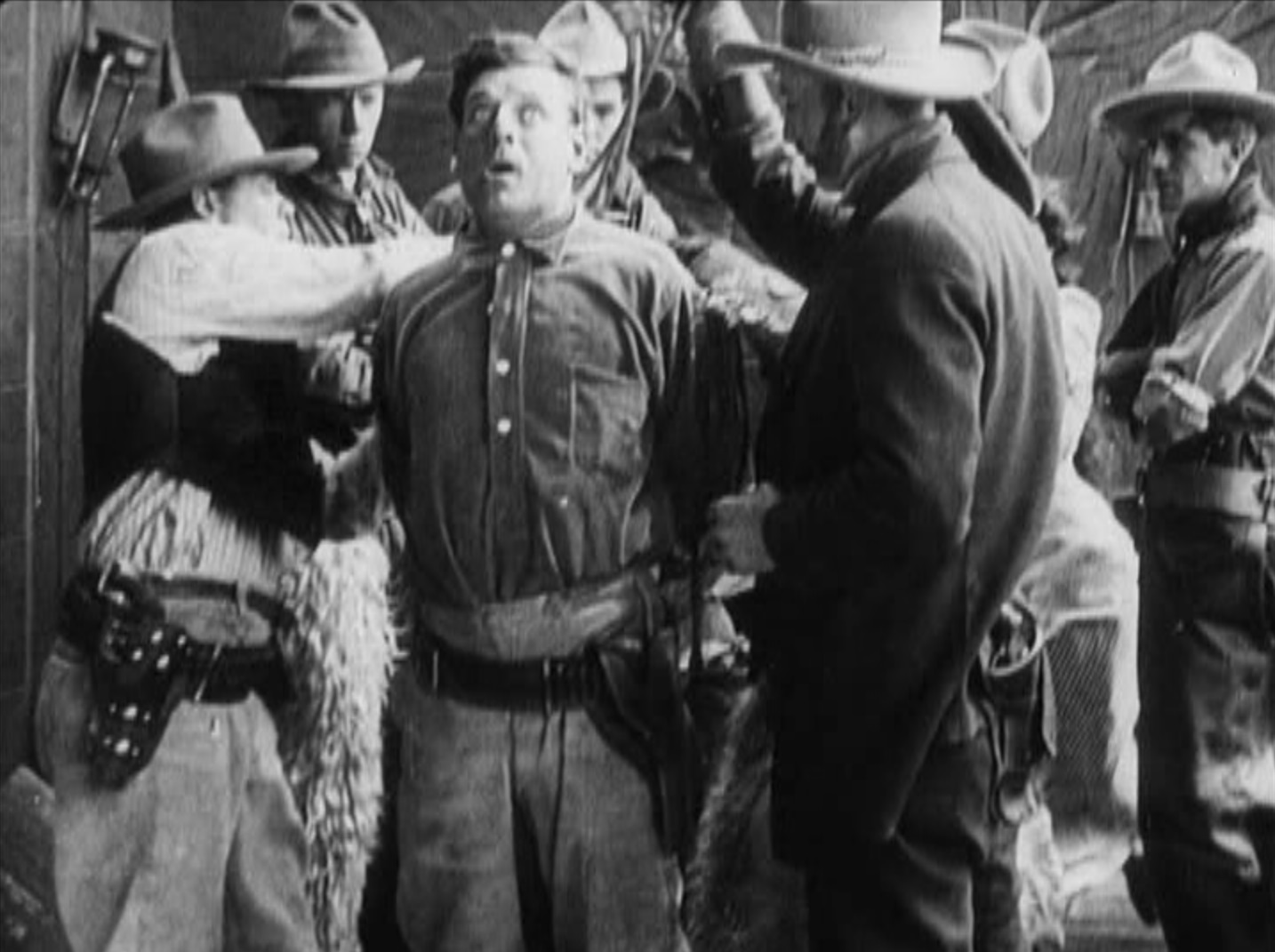 Although Anderson played the “Broncho Billy” character literally hundreds of times, this is not a series in the sense that we understand it today; you couldn’t possibly tie each of these short films together into a running narrative. In many of them, he winds up with a girl, always a different one, who he truly loves, and who he’s never met before. Sometimes he spends years in jail. Sometimes he’s actually not innocent. Each story is discrete, and if you tried to make all of them about the same person, he’d be schizophrenic in his behavior and near immortal in longevity (and the timeline wouldn’t work for the relatively brief period of the “Old West” anyway). Audiences at the time obviously accepted this, not expecting each story to be a continuation of the last, just looking for another rousing Western tale about a hero in a world ruled by guns and fists. This one includes a bit of cross-cutting at the climax, to heighten the tension as the girl rides to Billy’s rescue (a nice reversal of the usual expected situation), but is otherwise a pretty straightforward example of Nickelodeon-era film making. There’s no gunplay or other violence, Billy is remarkably easy-going and polite, and neither villain receives any comeuppance on screen. Broncho Billy gives audiences what they are looking for here, but not a lot else.