This late-period Keystone short from Charlie Chaplin is a somewhat more-sophisticated take on the many “park comedies” he made there; one which emphasizes situation over slapstick. While it’s no major breakthrough, it does pre-sage the work he would soon be starting at Essanay in 1915. 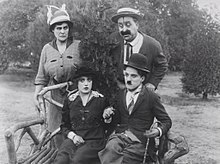 As the movie begins, Charlie is on a bench next to Phyllis Allen. They appear to be a couple, and Charlie seems to be less than enthusiastic about her company, plugging his ears as she speaks at one point. This whole take is done in a rather close two-shot that only shows the upper halves of their bodies – almost innovative for Keystone at the time. An intertitle tells us that Mabel Normand and Mack Sennett are also a married couple “taking some air” together, and they seem much happier, at least until Joe Bordeaux pulls up in a fancy automobile. Mack offers to help him crank it to get started again, but Mabel seems annoyed that he wanders off while Joe just laughs at his efforts to turn the immobile crank. Meanwhile, Phyllis has dozed off, and Charlie tries his luck with Cecile Arnold when she wanders up, but she walks off slightly offended when he seems to pay too close attention to her backside, and quickly runs to the side of her husband, Glen Cavender, who is made up as a Turk and sticks Charlie with a small dagger to drive him off. Charlie now finds Mabel standing unprotected while Mack is busy with the car, and he does his best to make her acquaintance. He does a trick with a thread, pretending to have it balanced on his nose, so that she will get close enough that he can give her a kiss, which results in his getting slapped. She calls Mack over when he won’t go away, but distracted Mack just “introduces” them so that now Charlie feels like he has a license to go on annoying her. 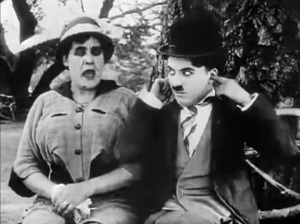 Joe eventually gets his car started and offers Mack a ride, leaving poor Mabel in the hands of lecherous Charlie. In desperation, she calls out for the police, which brings out Edgar Kennedy, in the guise of a Keystone Kop. Edgar chases Charlie through the bushes, back to Mabel and over to where the Turk still lurks, until Charlie is finally able to evade all of the cast for a while in a bush. Meanwhile, Joe lets Mack off and he finds Phyllis, sitting alone under the tree. He takes an interest in her, being just about as obnoxious about it as Charlie was to Mabel. She now calls out for help, making Edgar think that he’s located Charlie, but when he sees Mack, he assumes he’s got the wrong bird and goes on looking until Phyllis sets him straight. Now both Mack and Charlie are trying to evade Edgar, while still occasionally hitting on Mabel, Phyllis, or Cecile when the opportunity arises. 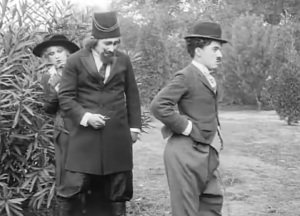 Mabel finds her way over to Phyllis and the two of them, relieved to be in better company than the annoying men, start chatting and telling each other about their husbands (what would Alison Bechdel say?). Charlie sits next to Phyllis, not noticing Mabel at first, and when she introduces them, another there is yelling and soon Charlie is on the run again when Edgar sees him with Phyllis and assumes he is “mashing” on her as well. Mack now finds Mabel and the two of them briefly commiserate until she tries to introduce her new friend, Phyllis. Mack tries to explain himself to Mabel, until Edgar, having lost Charlie, sees him and once again a chase is on. Mack and Charlie hide out in the bushes until Edgar finds them and clocks each of them on the noggin with his billy club. He hauls them past the ladies, who now come over and vouch for their husbands, then he walks off and attacks a young man on a park bench with another girl, apparently just because he’s gone crazy from hunting all these letches. Phyllis hauls Charlie off by the ear and Mabel and Mack laugh at them. 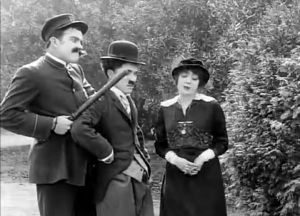 With this movie, I have completed all the reviews of Charlie’s first year in movies, a project I started back in 2014 (Chaplinfilmbyfilm got it done much quicker – but he didn’t have every other 100-year-old movie to contend with as well!). Of the “park comedies” he made, this is among the funniest, and it’s largely because the predictable plot plays out so well and because of the clever use of editing to keep us moving among the couples and their situations rapidly enough that it never gets old. As I suggested, the closer camera in this movie also allows for more intimacy with the characters and gags (like the thread) that might not work with the audience at a distance. It’s interesting to see Mabel Normand and Chaplin working together, despite their earlier differences, with him firmly in the director’s chair, but being quite generous to her as an actor – she gets at least as many laughs as he does.