This short comedy from Keystone stars Al St. John in an a-typical sympathetic role and uses a familiar story of two country bumpkins vying for the interests of one girl, but escalates to extreme speed and violence before the end. A rather unusual entry in Keystone’s catalog, this holds up in interesting ways today. 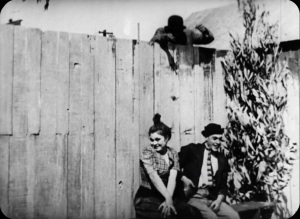 The film begins by introducing “the Daughter” (Alice Howell), who is busy whitewashing a fence with her father (Josef Swickard). We then see Al, introduced as “A Suitor” by the intertitles, and carrying a small gift. She eagerly abandons her work to rush over and see him, just as a second suitor (Rube Miller, who is also credited as director) walks up with a small bouquet of flowers for her. He is on the wrong side of the fence, however, and gets an eyeful of whitewash from the father when he tries peeking through a knothole. He then locates Alice and Al, and decides to frighten them by dangling a rubber spider overhead. They interrupt their smooching in shock, but then Al pokes his finger through another knothole, once again getting Rube in the eye. When he tries sticking his finger through, Alice grabs it and bites it, holding him in place long enough for Al to drop a rock on his head. Rube tries throwing a bigger rock over the fence, but winds up hitting Alice, of course. Rube now climbs over the fence and starts fighting with Al, in the process hitting both Alice and her father. The father chases Rube up a ladder and onto a rooftop, where he tries again to hit Al by throwing rainwater and other found objects, but never manages to hit his actual target. Al finds a shotgun and tries to shoot Rube, but only hits the father’s backside, knocking him off the roof. Dad now shoots Rube off the roof, throwing both boys off his property and telling them to keep away from his daughter. 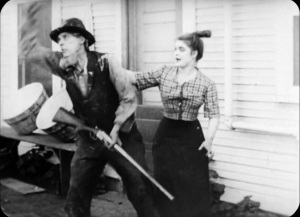 Dejected, Al and Rube head to a nearby park. Al finds a park bench, where he could have a rendezvous with Alice, and Rube finds an old cannon, conveniently pointed at the park bench. He gets some gunpowder together and loads it up, then sets up an elaborate booby trap, placing a triggering device beneath the legs of the bench, so that the cannon will fire when Al sits down. He sends a confederate to give Al a note, ostensibly from Alice, telling him to meet her at the bench. There is a bit of comedic tension, as it looks like Al will sit several times while examining the note, but suddenly Alice walks up and distracts him. Now Rube, concerned that she will sit in the “hot” seat, intervenes, but Al quickly kicks him away. They fight while Alice cheers, until Al knocks Rube out with a rock, causing him to fall back on the bench. The cannonball flies over him and knocks over a couple of nearby Keystone Kops, then flies past Alice and starts chasing her father. Rube manages to launch a second cannonball, which now pursues Al and Alice. Now the Kops come over to arrest him and a wild three-way chase ensues, ending with Rube falling down a cliff, being arrested and everyone being knocked down when the cannonballs finally explode against the cliffside.

The most exciting part of this movie is the chase sequence at the end, which is worthy of a Road Runner cartoon for its silliness and implied violence. The editing between three simultaneous, inter-locked chases works perfectly to ramp of the crescendo of chaotic wildness. Everyone falls over several times. Cannonballs turn around and change direction in order to pursue their quarry. Alice and Al refuse to let go of one another. I would bet that in a theater, this last two and a half minutes would have people laughing so hard their sides hurt. The characterizations are interesting also. Rube’s character reminds me of Al in “Mabel and Fatty Adrift,” although he seems not to want to extend his revenge to killing Alice, she is just collateral damage in trying to take out Al. Al’s character is more like the sort of thing his cousin Roscoe “Fatty” Arbuckle would specialize in, except Al’s more frenetic in his amorous intentions. Alice Howell is the big success – a somewhat “funny-looking” girl, she is part of the joke as we wonder how desperate these two yokels must be to fight over her. And she is great with the falls, hits, and other physicality. While some people may be put off by the cartoon violence, for my money, this is one of the funnier Keystone comedies.