Ford Sterling was the big star on the Keystone lot when this short was produced in April, 1913, and it exploits his famous expressive facial stylings to the fullest, while living up to the usual standard of low-production-values and quick action that is associated with the brand.

The movie takes place on locations that look suspiciously similar to those used in “A Muddy Romance.” Ford sits on the stoop of his house, fiddling with a fishing rod. His wife (Laura Oakley) is inside the house, stashing her savings inside of a stocking. A burglar (Bert Hunn) skulks outside of her window, watching where the loot is hidden. Ford comes in to ask his wife to borrow some money, and while her back is turned, the burglar sneaks in and takes the stocking. Unfortunately for him, a cop (Rube Miller) sees him come out of the window and pursues. Unfortunately for Ford, his wife has no intention of letting him have any of her hard-earned cash. He decides to go fishing. 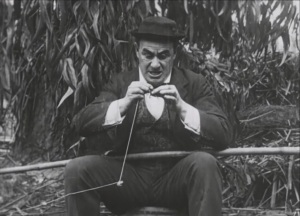 The robber realizes that he may be hauled in, and tosses the stocking into a pond or puddle, no doubt hoping to collect it when the heat is off. Ford, of course, winds up at that very place with his rod and reel. After some interesting scenes of him catching “little” fishes intercut with underwater images of fish swimming around and occasionally biting the hook, he pulls out the stocking. He’s annoyed to be catching trash, doesn’t notice the money, and tosses it in his catch box. Finally, he catches a “big one,” but it turns out to be a baby alligator, and he runs away from it, into a nest of alligators, knocking down the cop along the way. The cop also winds up at the alligator nest, briefly. When Ford gets home, the whole house is in an uproar, looking for the stolen money. Of course, it doesn’t look good when they find the stocking in Ford’s box. But, just then, the cop rushes in with the burglar, caught, and everything is brought to an amicable conclusion.

I wonder how many takes before this fish hit its mark?

Whenever I watch Ford Sterling, I think about what Charlie Chaplin said about him in his autobiography. He made fun of Sterling for “keeping the crew in stitches” throughout production by talking in his funny German accent during shooting. It seemed like a waste to Charlie, because the audience would never hear it. It always seems to me that keeping laughter going on a comedy set is a pretty good idea, it helps set the tone and keep morale up. Also, I can see Sterling’s lips moving the whole time, and although I can’t hear the accent, I can see from his gestures and actions that he’s keeping up a silly line of discourse, establishing what a clown his character is. Sterling wasn’t in Chaplin’s league, really, but he was good for a few laughs. He has a distinct style and it’s easy to see why he was popular. This movie never really pays off with the kind of chaotic craziness we’d hope for in a Keystone, but it’s a half-reeler that was produced for very little, and it plays well enough, considering.

I have not been able to find this movie available for free on the Internet. If you do, please comment.