October’s over, but wait! We still have one more centennial to add to our history of horror. This is my contribution to the “Barrymore Trilogy Blogathon,” hosted by In the Good Old Days of Classic Hollywood. Please check back there in the coming week for more of the entries. 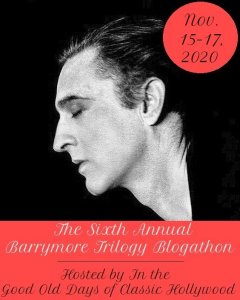 This version of the classic Robert Louis Stevenson tale stars John Barrymore, whose reputation as an actor was already well-established, both on the stage and screen at this point, though some of his greatest triumphs in cinema were yet to come. This movie begins by introducing Dr. Henry Jekyll hard at work over his microscope, boasting to a skeptical colleague (Charles Lane as Dr. Lanyon) that science can conquer any mystery. The insert shots of micro-organisms may have been the first that many 1920s audiences had seen. Dr. Lanyon accuses him of meddling with the supernatural, and his butler Poole (George Stevens) comes in to remind him of his shift at the clinic and a later dinner date. We see the “human repair shop” which the charitable Jekyll runs to treat the poor of London. Interestingly, his home and the clinic appear to be on the same crowded London street, suggesting that a sumptuous home could be shouldered up against poverty in that time and place (the movie appears to be set, as the story is, in the late 19th Century).

Meanwhile, the man whom Jekyll is scheduled to meet later is introduced to the audience. This is Sir George Carew (Brandon Hurst), who appears to be a somewhat rakish middle aged man with an innocent young daughter Millicent (Martha Mansfield), whom he is very protective of. The cynical Carew mistrusts Jekyll precisely because he appears to be too virtuous, and he inquires among his friends for evidence of his failings, but Landon among others avers that Jekyll really is as pure as he claims, which only deepens Carew’s concern. When Jekyll finally arrives (late, of course), Carew and he debate on the nature of good and evil, and Carew tells Jekyll, “The only way to get rid of a temptation is to yield to it.” He encourages Jekyll to live for himself some of the time. 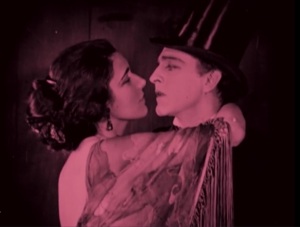 The scene cuts to a dance hall where a dancer named Gina (Nita Naldi) fascinates men of all classes, showing more of her body than was respectable in the 1890s. Carew, Jekyll and others, slumming, show up to take in the spectacle. Jekyll seems unable to take his eyes from Gina, who joins the party at Sir Carew’s request, immediately embracing Jekyll despite his shyness.  Jekyll runs out, then shocks Landon by proclaiming that he could use science to divide the evil and good in the soul of a man, putting them into separate bodies and freeing the good to achieve its full potential. Jekyll begins research and experiments, pouring liquids from one flask to another. Finally, after much trial and error, he develops a potion that rapidly transforms him into a hideous, evil counterpart, a man he refers to as Edward Hyde, after convulsions and evident pain. Time-lapse photography is used to show his hand growing claws. When in the form and consciousness of Hyde, Jekyll is not recognizable as himself, so to facilitate his bad side’s access to his own home and adjacent laboratory, the doctor informs his trusty servant Poole that Mr. Hyde is to have “full authority and liberty” at the house.

Hyde also takes on a cheap flat in another part of town, frightening the landlady with his appearance and manner, this to function as a place he could carry out his licentious ways (not an uncommon thing for gentlemen of earlier periods who wished to keep mistresses). He goes back to the dance hall and talks the manager into introducing him to Gina. Gina is terrified by him, but seems unable to resist his dominance. She tells him a story about the ring she wears, which we see in flashback: it is a ring designed to carry a quantity of poison, and it was used by a jealous husband to poison a rival at a dinner in Italy, a story which has resonance of the Medicis. Hyde takes it for himself. In a brief scene, another of Millicent’s young suitors proposes marriage, but she refuses because her heart belongs to Jekyll. However, it seems that Jekyll’s life is increasingly organized around his Hyde persona, and we see him altering his will to give Hyde most of his inheritance.

Hyde’s behavior is increasingly wild, and he throws Gina out, telling her he is through with her. Jekyll decides to fight against his urge to become Hyde, but while visiting Millicent he suddenly becomes moody and difficult. They seem to quarrel (no intertitles tell us what is said), but Jekyll comes back and kisses her. Apparently, the craving has been overcome, but it is only temporary and we see Hyde stalking the streets and visiting an opium den, where he laughs at the antics of the addicts, one of whom imagine himself covered with fire ants. He doesn’t take any of the drug himself, but he has the proprietors bring out a young girl, who we assume is an addict forced to prostitute herself.

Millicent has become increasingly melancholy, to the distress of her father, so Sir George calls on Jekyll, but the young man is not at home. Sir George then encounters Hyde in a nearby street, where the brute has just knocked a small boy to the ground and injured him. To make recompense for his actions, he goes and gets a check which he returns to the boy’s father. Carew notices that the check has been signed by Dr. Jekyll. Carew follows up by confronting Dr. Jekyll about the kind of company he keeps, but the confrontation brings out Jekyll’s Hyde persona without requiring the use of the potion. Hyde proceeds to murder Carew. Hyde then runs to his apartment and destroys any evidence there that might link him to Jekyll. After barely avoiding the police, the creature returns to the lab, where he drinks the counter-potion and reverts to Jekyll. 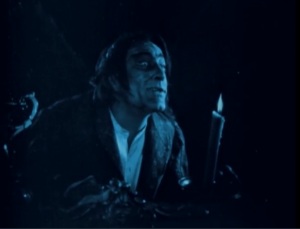 This works for a while, but with Jekyll unable to control his transformation at times of stress, and also lacking a vital ingredient for the antidote, his days are numbered. Jekyll therefore confines himself to his locked lab, fearing he might become Hyde at any moment. Millicent finally goes to see him, but as she knocks on the lab’s door, he begins transforming into Hyde. He takes the final expedient of taking the poison from Gina’s ring as he begins to transform into Hyde. She runs to get Lanyon, who comes in and finds Hyde dying in a chair, but before his very eyes the body transforms into that of his friend, Dr. Jekyll. Lanyon pieces together what has happened and claims that Hyde has killed Jekyll, thus clearing his good name.

Barrymore’s performance in this film is strong and memorable. He plays both roles, and while he’s helped by lighting and makeup, a lot of what convinces you they are two different people comes down to his posture and body language. As the virtuous Jekyll, he is ramrod-stiff, with shoulders thrown back and head held high – at times almost a caricature of the melodramatic hero, except that Barrymore’s sense of dignity keeps it from becoming so. Barrymore was known as “the Great Profile” and during his Jekyll scenes, the camera often keeps him in profile to emphasize his attractiveness. As Hyde, he is hunched, creeping, sly, and frequently enters the personal space of the other actors and touches them uninvited. He is definitely setting out a clear difference that can be seen, and I suspect it would have played out much the same on the stage. In terms of acting, I also think that Martha Mansfield deserves a mention. She is much more subtle than many of the younger female stars of the day. Instead of just looking longingly at Barrymore, she adds occasional questioning  looks, and places where she catches herself and tries to be coy.

This version of the story is taken directly from the popular stage version, which means that Millicent has been added as a character and that elements of the Stevenson story have been simplified. There is however a long tradition of complaining, especially among cinematographers, that the traditional stage effect is not faithfully reproduced in any film version. When Jekyll would turn into Hyde on stage, the effect would be achieved in real time using lighting. An actor would have red makeup on but stand under a red light while appearing as Hyde, then go into their convulsions, maybe slip on some false teeth they had hidden in their hand, and meanwhile a yellow or blue light would be put on their face, revealing the makeup. To an audience, it seems like a transformation happened in front of their own eyes. It doesn’t really make much sense to do this in cinema, however, because editing gives you the power to do more than this would allow. Barrymore’s first transformation is subtle, and could have almost have been done this way except for the claws, but his later version has a distended head and a crooked nose that couldn’t have been added “live.”

It’s well known that producers of silent movies made many versions of this story, though I’ve only reviewed one other so far. Partly because of its opportunities to showcase acting as in this case, its cinematic potential through the transformation scenes, and also its simple moral message, with its attendant opportunities for voyeuristic peeks into the world of vice, it had a strong appeal. There’s a bit of an underlying queer element in this story as well, which many audiences at the time might not have caught. Jekyll is a bachelor who shows little physical passion for his fiancé and has no reputation as a rake. Suddenly, there is another man in his life that no one approves of, who has the run of his house and Jekyll even wills all his property to him. They are not seen in public together, but it is assumed they know one another well. Jekyll refuses to “give him up,” even when his position and reputation are threatened. It seems unlikely that Stevenson was conscious of this, but middle class men who had maintained homosexual relationships in Victorian England probably saw a lot of themselves in the situation. Barrymore may not have been aware of it either, but he makes an attractive Jekyll and a bestial Hyde, which may have turned a few heads at the time.