Although he had already started directing his own movies when this short was released, this is another example of Charlie Chaplin’s work with Mack Sennett as director, along with “Tillie’s Punctured Romance” and “The Fatal Mallet.” It repeats themes that Sennett and Chaplin had explored before, but with one big novelty thrown in. 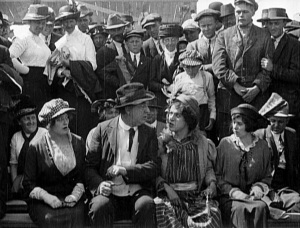 The movie begins by showing us an audience gathered to see a parade. The background is filled with people who are probably genuine spectators, but there are four Keystone actors in front. These include Mack Swain and Phyllis Allen, and most importantly, Charlie himself, although he is dressed in drag and plays Mack’s wife. There’s a bit of roughhousing in the stands and some shots of a military parade going by, and then Mack sneaks off with Phyllis. A cameraman (Mack Sennet) sets up to shoot the parade in another shot and then we see Charlie realize she has been abandoned. She sees them running past the camera and sets off in hot pursuit, again ruining Sennett’s shot of soldiers marching by. She gets distracted by his efforts to remove her from the shot and begins posing for the camera, so Mack calls in a Keystone Kop (I think it’s Billy Gilbert). Soon Charlie is kicking and pushing both of them and they push her into another Kop (Ted Edwards), who shoves her back into camera view. This goes back and forth for a while, interrupted only by a shot of some naval boats in San Pedro Harbor. 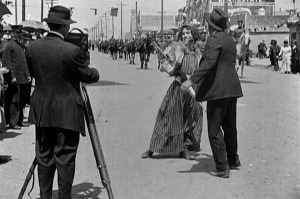 Finally, Charlie remembers her true objective and goes after Mack and Phyllis, who are admiring the ships. She attacks them viciously with her umbrella. When the much larger Swain strikes back, she is once again shoved into a Keystone Kop and the slapstick violence starts to ramp up again. Swain is able to break away and find Phyllis near the launching of some motorboats while Charlie dances to a military band. She eventually find her husband and the “other woman” again, and they fight, this time with a large crowd gathered to watch in the background. The camera cuts to a new angle, showing that the fight has edge to the side of the dock, and soon Swain gives Charlie a shove and she does a double backflip into the harbor. The closing shot is of Charlie splashing around fruitlessly in the water. 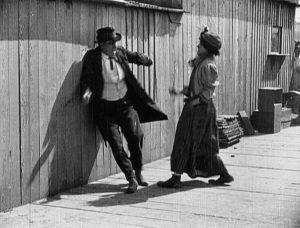 About half of this movie is a straight remake of “Kid Auto Races,” except for the cross-dressing. It was common for Sennett to take advantage of a public spectacle by getting some actors quickly into costume and ad-libbing a slapstick comedy, although there’s more of a story here than in the earlier film. The spectators are pretty obviously not extras – a few stare at the camera, but most stare and laugh at the actors. Interestingly, I noticed that older women, far from seeming shocked, appeared to be the most entertained by Chaplin’s antics. This was the first time Chaplin had appeared in drag on film (though I assume he’d done it before on Vaudeville stages), and to the degree he had built up fans for his “Little Tramp” characterization, I have to assume his audience wouldn’t have recognized him at all like this (remember, it was only about four months earlier that the Tramp outfit was introduced). But his trademark physicality is fully on display here, something that was remarked on by a reviewer at the time. The final backflip has to be seen to be believed. This is also the first time he was teamed with Mack Swain, who would become a reliable foil in the years after Chaplin struck out on his own, perhaps most famously in “The Gold Rush.”