We’re back with another short comedy from the Ebony Film Company, a white-owned Chicago-based company that made movies with Black performers intended for African American audiences. As with “Two Knights of Vaudeville,” the result is a somewhat problematic piece of the legacy of race in America. 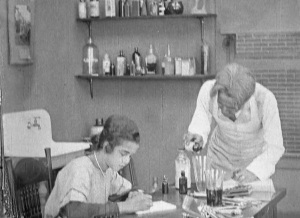 The movie opens with a professor placing a classified ad for a genuine mummy to use for experimentation. The professor’s daughter is dating a young man, Bill, and the professor comes home to find them snuggling on the couch, but ignores them in order to test out his new formula in the kitchen. He takes a mounted stuffed duck from the wall and injects the formula, causing an explosion that frightens a small boy peeping in the window. The duck comes to life! It also runs all over the place, wreaking havoc on the kitchen. When Bill comes in to investigate, the professor hits him with the broom intended for the duck. Bill takes his chance to ask the professor for his daughter’s hand in marriage, and the professor agrees on the condition that his formula prove successful with a mummy. This gives Bill an idea. 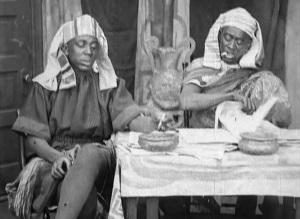 The next day, Bill goes to a costume shop and picks up a phony sarcophagus. He offers a shoe shine boy ten dollars to play a mummy. Meanwhile, we learn that emissaries from Egypt are in town looking for a stolen mummy, and they spot the professor’s ad. Bill takes the boy back to his place and dresses him up as the mummy and puts him in the sarcophagus. He calls the professor and tells him to come down and pick up his mummy. While waiting, he runs into a friend and brings him in on the scam. The friend sells the “mummy” for a thousand dollars, which he and Bill fight over while the shoeshine boy pockets a goodly portion of it unnoticed. Bill gets some porters to cart the sarcophagus over to the professor’s house. The porters are insufficiently cautious, and the sarcophagus drops out the back, being dragged behind the cart by the rope they used to partially tie it down. The “mummy” yells and gets them to stop and put it back on the cart more securely. The two Egyptian agent observe the mummy’s arrival, since they are now watching the professor’s house. They request admittance of the daughter and ask for the professor to hand it over, so he throws them out. 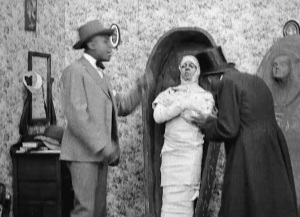 Now the professor is ready to perform his test, injecting his formula into a genuine mummy. When he does inject it into the shoeshine boy, he screams and starts flailing and running all around the room (much like the duck did, actually). The professor manages to seal it back inside the sarcophagus, but he is hurt in the process and his daughter ministers to his aid. The two Egyptians take advantage of the distraction to sneak into the house and steal the now-unconscious mummy from the sarcophagus. Bill and Lulu head out to find a parson. The professor nails up the sarcophagus to prevent further mummy attacks. The Egyptians are genuflecting before their prize when the shoeshine boy wakes up and terrifies them. He manages to free himself from the bandages and finds all of the professor’s money in the wraps. 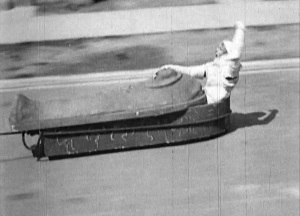 There’s a lot of familiar caricatures of Black life here, not least including the many scare-takes the mummy makes possible, as well as the greed and laziness evinced by Bill and his allies. Still, we do get an African American professor, who has authority over his daughter’s future, placing him as an equal to white patriarchs in this regard. He may be a bit nutty (typical of professors in comedies), but he is able to bring a duck back to life. Certainly this movie is less offensive than something like “Watermelon Patch” and it is something of a relief to see actual Black actors as opposed to white actors in blackface in movies of this time, perhaps that would have appealed to the intended audience as well. The young NAACP did denounce Ebony for this sort of movie, however, and even went so far as to suggest that comedies in general were inappropriate material for Black productions. They weren’t alone – a lot of progressive-minded people regarded the slapstick of the era as “vulgar” and degrading. It would be a long time before African American comics like Richard Pryor and Eddie Murphy came along to challenge stereotypes rather than reinforce them.

I have not been able to find this available for free on the Internet. If you do, please comment.