The first attempt to bring the Edgar Rice Burroughs jungle hero to the screen was this early silent feature from First National. It spawned three sequels, and is remembered today as being the most faithful to the book of all of the Tarzan movies since, but how does it hold up as entertainment?

The movie begins in England, where Lord and Lady Greystoke (True Boardman and Kathleen Kirkham) are planning a trip to Africa. An older gentleman advises Alice, Lady Greystoke, to stay home – Africa is no place for a lady and besides, she won’t even be able to take her maid. Lady Greystoke, a modern woman, is disdainful and off they go. While they are on the high seas, a band of mutineers takes the ship and begins murdering the passengers. One sailor, Binns (George B. French), is sympathetic and risks his own life to save them, but he is captured by Arabs and becomes their slave while the couple are marooned on an unknown coast, nowhere near civilization. Alice dies giving birth to their son, and Lord Greystoke is at a loss as to how to nourish him without her milk. Nearby, the ape Kala has lost her baby and mourns deeply. Her tribe of apes kills Lord Greystoke and brings her the human infant. 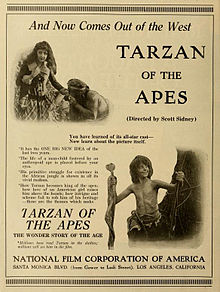 The boy, now known as Tarzan (Gordon Griffith), is raised by Kala as her own. It never occurs to him that he isn’t an ape until one day when he sees his reflection in a pool (apparently he never noticed his hairless arms before). This sets him to thinking about his identity. He discovers the shack where his parents skeletons still lie, He finds a picture book with alphabet images and teaches himself to speak. He also steals clothing from some natives because apparently wearing clothes is a natural urge.

Meanwhile, Binns finally escapes from the Arabs after ten years and discovers the ape-boy and instructs him, but is unable to rescue him when the Arabs again intervene. He returns to England and convinces some scientists to begin an expedition to find the young Lord Greystoke. Jane Porter (Enid Markey) is the daughter of the lead scientist, and for some reason she is allowed to bring along a maid (Madame Sul-Te-Wan). Kala is killed by a native hunter, who is in turn killed by the now-adult Tarzan (Elmo Lincoln). Tarzan is smitten when he spies Jane and her father poking around the old shack, but is too shy to reveal himself. The scientists conclude that the child was killed when the apes attacked, but Binns still knows better. Some villagers kidnap Jane and Tarzan rescues her, and the two of them fall in love.

True to the book or not, this movie has a lot of problems. The main one is that it is almost completely lacking a plot. That’s probably because instead of trying to tell the full story, they only used the first half of the book, saving the second half for the sequel (“The Romance of Tarzan”). The quality of Burroughs’s work as literature can be debated, but cutting a story in half almost never improves the narrative structure. I kept waiting for the story to get started, and then suddenly it was over. This is more like an “origin story” without any payoff. It needed a clearer conflict to resolve, one that would carry over from the beginning to the end, possibly even some way to have Tarzan avenge himself on the mutineers who are ultimately responsible for his and his parents’ fate.

Another problem, which probably only bothered some audiences at the time, is the explicit and implicit racism of so much of the movie. Madame Sul-Te-Wan was one of the great pioneers of African American film acting, but in this movie she portrays a caricature of a superstitious black maid. The natives who capture Jane are every bit as subhuman and rapacious as Gus from “The Birth of a Nation.” And, of course, Tarzan is superior to them in every way, although in theory this is because he has been raised by apes, and thus is more in touch with nature, not because he is white. I haven’t even mentioned the greedy slaving Arabs, who represent both another stereotype and an alibi for the history of European enslavement of Africans.

Despite these flaws, the movie was an undisputed success in its day, grossing over 1.5 million dollars at a time when movies rarely broke one million. This is probably not least due to the convincing use of Louisiana swamps as a location for African jungles, and the thrills of Tarzan’s adventures. I also rather suspect that the thrill of seeing a half-naked (sometimes fully naked) boy and man on the screen was an appeal to audiences in those days, when there was so little nudity in cinema. I didn’t think much of Lincoln’s or Griffith’s acting, but their physiques are fully on display, and the former was definitely a muscular specimen. There are also very brief glimpses of “native” women’s breasts, but these were censored in many locales. The fights are well-edited and exciting as well, even if they lack a coherent narrative to tie them together, and there are glimpses of exotic animals that were rarely seen at the time, surely an appeal for children who lacked access to zoos. This movie may not seem like much today, but it should also be seen for what it was at the time –a spectacle that brought in the audiences and gave them their money’s worth.