Buster Keaton’s first movie released after he and Roscoe “Fatty” Arbuckle ended their partnership and started to work independently is parody of a Ford Motor Company promotional movie for prefab housing. While our ability to appreciate the source of the satire is limited today, it holds up as a comedy for the ages.

The movie begins with a wedding between Buster and his new bride, Sybil Seely. For some reason, their “just married” car is being driven by the Buster’s former rival, “Handy Hank,” who is played by an otherwise unknown and unidentified actor. Buster and Sybil receive a plot of land and a build-it-yourself house that comes in numbered boxes, with IKEA-sized directions in an envelope. Keaton sets to work putting the house together, doing things like sitting on a plank a story up as he saws it in half, causing him to drop to the ground when it separates. Meanwhile, Hank takes some paint and renumbers two of the boxes, adding to the confusion Buster’s already serious incompetence was causing. The end result looks like a German Expressionist worked with a cartoonist to design a house.

Undaunted, Keaton and his wife move into the house. Their first major challenge is when the piano arrives. Keaton tries to attach a pulley to the ceiling to haul it in, but the ceiling droops down like a circus tent. So, Keaton props it up with a spare board. He brings the piano in, dangling from the ceiling, but it swings wildly and chases him around the room before crashing through the floor. His wife brings in a music score and he sets it on the piano. Buster also encounters problems when he nails down the carpet, forgetting that he left his jacket in the middle of the floor. The only way he can think of to get rid of the unsightly lump is to cut around it, remove the jacket, then put a small rug over the hole in the carpet. He uses the extra piece of carpet as a welcome mat. He tries to install the chimney, but winds up falling into the bathtub after his wife has just gotten out, then the door he chooses to leave the bathroom turns out to be a straight drop to the ground, due to the misnumbered boxes. 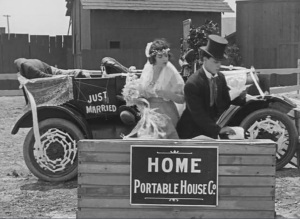 Buster and Sybil hold a housewarming party, trying to serve their guests despite an oddly-arranged kitchen, but when a storm kicks up outside, they discover that the house pivots in the wind, eventually spinning like a merry-go-round. All of the guests eventually are thrown clear by centripetal force, and Buster and Sibyl watch the house spin from their yard, in the rain. As if this were not enough, Keaton finds he has built his house on the wrong site and has to move it, attaching it to his car with ropes, and then simply nailing it to the back of the car. The movie reaches its climax when the house becomes stuck on railroad tracks. Keaton and Seely try to move it out the way of an oncoming train, which eventually passes on the neighboring track. As the couple look relieved, the house is immediately struck and demolished by another train coming the other way. Keaton stares at the scene, places a ‘For Sale’ sign with the heap (attaching the building instructions) and walks off with Seely. 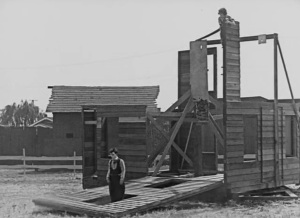 Keaton showed considerable insight in choosing a simple subject that would make a coherent framework around which to build his many sight gags and pratfalls. The movie is essentially a series of vignettes, each prefaced by a shot of a calendar page being torn off to show us the passage of the week (a device borrowed from the Ford film). Setting it up that way actually makes it feel more coherent than, for example, “The Garage,” in which he and Arbuckle’s gags are tied together just by the sense that all of this could happen in an established workspace. Keaton did not hold back on his gags, using a full-sized house to great effect. One gag I didn’t mention above is an anticipation of one he used years later in “Steamboat Bill, Jr.” where a wall of a house falls toward him, with his character fortuitously missing getting crushed due to standing in the spot where the open window hits. The house really does spin, really is dragged onto a railroad track, and really is smashed by a locomotive. The gag at the end reminded me of a story Keaton tells in his autobiography about a practical joke played on Marcus Loew, where he pretended his car had died on a cable car track, carefully positioning it so that the trams would zip past, barely missing the front and rear bumpers. 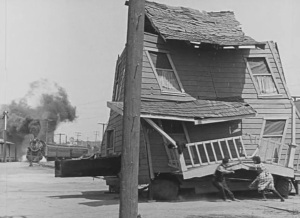 Keaton shared writing and directing credits with Edward F. Cline, a man who would continue working on most of Keaton’s short movies for the next few years. It seems that Keaton, who was used to collaborating with Arbuckle, worked better at this time having someone to bounce ideas off of, or even to let him take over sometimes. This is very different from Charlie Chaplin, who started directing his own work while still in his first year at Keystone, and never let anyone else share credit for his creative work afterward. I suspect these differences in work styles partially explains the different flavors of their short movies – Chaplin’s are largely the work of a single genius, while Keaton’s are less personal, more inclusive creations. I don’t entirely know which I prefer – I think I laugh more at Chaplin movies from this period, but there’s something about Keaton that keeps me coming back, partly just to see how he did what he did.

You can watch it for free: here (no music)