One of D.W. Griffith’s most enduring features, this movie comes from the period in which he was one of the leading lights of United Artists, and was quickly bankrupting himself trying to keep up a stream of hits for that ambitious studio project. While some of the movies he made then are dismissed today, this one endures as a critics’ darling – does it live up to its reputation?

Griffith’ usual flowery intertitles set up a situation he tries to present as “universal” although it is rather specific. Anna Moore (Lillian Gish) is a young woman living East of Boston with her widowed mother. As money is tight, Anna reluctantly agrees to go in to the city to visit wealthy relatives, and ask for help. The family is clearly put off by her appearance, and she is a little too shy (and a little too proud) to ask outright for money, so she awkwardly accepts a left-handed invitation to stay. The one person in “society” who pays her any attention is Lennox Sanderson (Lowell Sherman), a raconteur whose only interest is sex. He tricks her into a phony wedding in order to get her in bed, and convinces her to keep it a secret to avoid upsetting his father an losing his inheritance. Anna, thinking that her future fortune is now secure, returns home and begins seeing him secretly. She soon becomes pregnant, and tells Lennox that they must now reveal their marriage, causing him to reveal to her that it wasn’t legal. He promises her money and leaves.

Anna runs away to hide her shame and takes up residence in a boarding house under the name of “Mrs. Lennox.” The nosy landlady (Emily Fitzroy) obviously suspects that she may be unmarried, but allows her to stay and have her baby in her room. The child becomes ill and the doctor is unable to provide adequate help, so the landlady reminds Anna that if the child dies un-baptized, it will “never see God.” Desperate and unable to enlist a priest, Anna performs her own baptism, christening the child “Trust Lennox.” After its inevitable expiration, Anna is turned out and enters the world as a fallen woman. 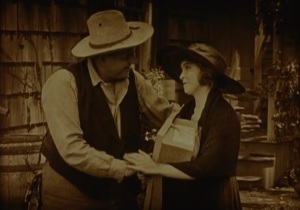 Fortunately, she stumbles into the farm of “Squire” Bartlett (Burr McIntosh), a local patriarch with a stern manner and a good family. When Anna asks for work, the Squire is reluctant, but his pious wife (long-time Griffith regular Kate Bruce) quotes scripture at him: “Inasmuch as ye have done to the least of these, ye have done it unto me.” Unwilling to go against scripture, the Squire takes her in and puts her to hard work hauling water. On her first day, she is discovered by Lennox, who happens to live up the road, and he tells her to leave. She tells the Squire’s son David (Richard Barthelmass) of her intention to do so, using the rigorousness of the work as an excuse, but he’s attracted to her and convinces her to stay. The Squire has betrothed David to his cousin Kate (Mary Hay), and she comes out to stay with the family, but things don’t go as planned. David shows more interest in Anna, and Kate’s time is divided between a bumbling butterfly collector (memorably played by Creighton Hale, who always seemed to be imitating Harold Lloyd, but was good nonetheless) and Lennox, who has chosen her as his next conquest. 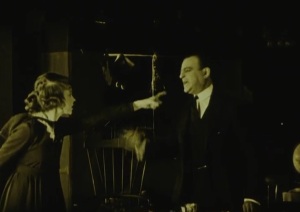 Anna resists telling about her past, and also tries to resist David’s advances, but finds herself falling in love with the handsome and decent young man in spite of herself. Things seem likely to work out for the best until the village gossip (Vivia Ogden) sees Anna in town on the day when her former landlady is at the sewing circle, and so learns the truth. Busting with outrage and joy at the news item she now has, she rushes through the snow out to the Squire’s place, but she’s interrupted by the spontaneous outbreak of a country dance. A good deal of time is spent in almost Hitchcockian suspense as we wait to see when she will spring her surprise, and then what the Squire will do about it. His first reaction is again tempered by his wife, who counsels him to find “proof,” so he allows Anna to stay one more night while he drives over to meet the landlady himself. Meanwhile, David and Kate break things off formally, and David tells Anna he loves her. As Anna is serving dinner to the family and guests (including Lennox and the gossip), the Squire bursts in and turns her from his house. Anna denounces Lennox as the one who seduced her and accuses them of hypocrisy for the double standard by which they judge her and accept him. Then she runs out of the house and into a driving blizzard with no more protection than a thin cape. David goes after her and soon the rest of the Bartletts are searching for both of them. 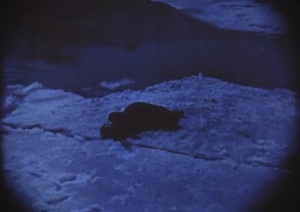 The climax of the film comes as Anna stumbles through the blizzard, eventually collapsing on the frozen river. David, who has also stumbled and broken his lantern, does manage to find her (after giving a brief beating to the deserving Lennox) just as the ice starts to break up in the morning. He then heroically leaps from ice floe to ice floe, somehow managing to get ahead of her (while carrying her cape, which she had dropped), and carrying her back to safety by further dangerous leaps as the ice speeds toward the falls and the doom of both of them. After this, there is a triple wedding of David and Anna, Kate and the Professor, and the gossip and the shy rube that has been following her around for 20 years. Lennox even apologizes for his error, and the apparent tragedy is made comical after all.

I’ll start by acknowledging that I agree with the critics: this is my personal favorite of D.W. Griffith’s films, and easily the one Griffith feature that I look forward to seeing again. For once, he focused on the personal (despite his urgent “universalizing” in the narrative intertitles) and let the story tell itself without bombast or spectacle. And yet, the tools he learned for cross-cutting and suspense are used to their fullest potential, and the final sequence really is something spectacular, because we really are seeing Barthelmass leap across a freezing river as Gish floats helplessly towards potential danger. The insert shot of Niagara notwithstanding, the actors really did perform remarkably brave stunts here, which no one would conceive of trying today. Gish later reported that much of the blizzard sequence was also done under conditions pretty much as they are depicted, and apparently she fainted from cold at least once and had to be treated for frostbite, which certainly made for a convincing performance. 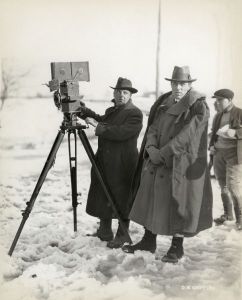 Bitzer and Griffith bundled up while Gish is in her cape.

Griffith’s treatment of Gish, which in the above example sounds fairly abusive, is at the heart of this movie, in fact. The movie sets itself up as a diatribe against any kind of polygamy, espousing “One Man for One Woman for Life” as the fairest and best ideal. But Griffith had recently thrown Gish over for Carol Dempster, the new woman in his life, and the star of many of his money-losing features. Gish herself had been a younger trade-in on his first wife, Linda Arvidson, so Griffith was by no means preaching what he practiced here. But, on some level, it’s hard not to read this movie as a kind of apology to Gish, even a recognition of her superiority to him, and the scene in which she denounces Lennox may gain some of its power (despite a rather clichéd scenario) due to her ability to tap into Anna’s situation. It’s also interesting that none of the “bad guys” in this movie are punished with death. Griffith seems to be pleading for himself through Lennox, but it’s much more unusual for him to let off the interfering landlady or the town gossip so easily. Whether Gish saw this as an apology or not, she remained a loyal defender of Griffith to her death.

Although what one tends to remember from the film is the final suspense/confrontation/blizzard/rescue sequence, that’s really only about a half hour of a two-and-a-half-hour-film. A lot of the rest of the time is taken up with goings on of the lives of the characters of Griffith’s rustic small town. These are basically “rube” characters, drawn from the kind of light stage comedies where Griffith had found work during the late nineteenth and early twentieth centuries. They remind us a bit of the characters peopling rural-based Sennett and Arbuckle comedies, although there is less overt slapstick. Strictly speaking, there is more of this than we really need, but it doesn’t really get in the way of appreciating the rest of the film.