William S. Hart one-ups John Wayne by being even quieter in this movie from Thomas Ince’s Artcraft Pictures. Is silence golden? We’ll take a look at it today. 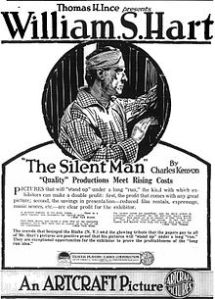 Hart plays “Silent” Budd Marr, a prospector who, after three months in the desert, has finally struck a claim. He treats his horse and mule with characteristic affection, bringing them past rattlesnakes and to the front of the “Hello Thar” dance hall in “Bakeoven,” the small gold rush camp town that is the main setting of our tale. There he proceeds to order three tall glasses of water – a very wise idea given his parched condition – before heading over to the assessor’s office to file his claim. Because he pays in gold dust, he attracts the attention of the proprietors, Ames Mitchell (Milton Ross) and “Handsome” Jack Pressley (Robert McKim). Handsom Jack tries to get Silent drunk, but he sticks to water. He also meets “Grubstake” Higgins (J.P. Lockney), a more classically grizzled-looking resident of the town, who rides him for his choice of drink with a racist comment, but then is big-hearted enough to direct him to the assessor’s office. With his claim in hand, Silent now heads back to the bar for some “man-sized” drinks. This is a mistake, because in the meantime Mitchell and Pressley have devised a plan. 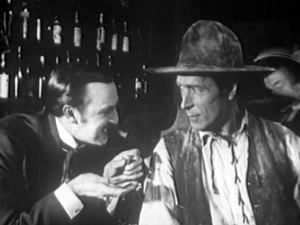 Pressley sends one of his dance hall girls, a woman he had tricked into marrying him in order to lure her to the “Hello Thar,” to get Silent’s attention, and then starts a dispute, which can only be settled by a card game between the two of them. Of course, he’s cheating, using the girl to telegraph Silent’s hand from behind his back, but when Silent catches on he makes the situation worse by fighting and getting shot, spending two weeks in bed to recover, and giving the claim-jumpers a chance to secure a claim with the assessor, somehow moving Silent’s claim a few hundred yards from where it should be. 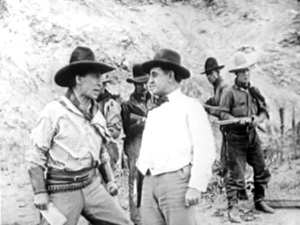 While Silent’s been out of action, Handsome Jack has been busy recruiting a new girl for his business. This is Betty Bryce (played by the equally alliterative Vola Vale), a young innocent orphan from the neighboring town of Chloride who takes care of her brother (Harold Goodwin), who’d rather she marry a cowboy so he could have a horse to ride. She falls for Pressley’s line, however, with the result that she and he are in the same coach where Ames is transporting his ill-gotten gold dust back to Bakeoven when Silent, now reduced to banditry, decides to raid it. He winds up taking  the girl captive, and has to hide out with her while the posse searches for him. She assumes him to be an evil desperado, but he treats her with gentlemanly consideration, and gradually she comes to see him as trustworthy. He tells her the story of how he came to desperado-hood and that he’s saved her from an evil fate, though at first she has doubts. 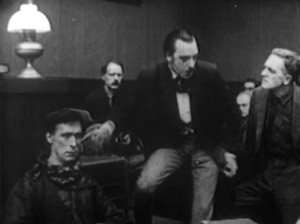 Silent brings Betty to the mountain home of “Preachin” Bill Hardy (George Nichols), a former prospector who’s found God and is now building a church in the wilderness to bring the Word to the forsaken people of Bakeoven (but still can’t remember not to cuss in front of young girls). Grubstake brings her brother out to join her, and the family is reunited. The happiness of the situation is temporary (of course), as Ames and Pressley eventually get wind of Silent’s whereabouts. Betty’s brother, eager to earn the reward for the bandit in order to give it to the preacher to help him finish the church, is injured in an attempt to take Silent single-handed, and he brings him back to the church, but meanwhile, the bad guys have set fire to the church to try to get the information from Hardy. Silent lets the boy bring him in so that the reward will go to Hardy, who has lost everything for his honor. At the trial, the truth comes out when Grubstake reveals his true identity as a Federal Marshall investigating Ames. Pressley and Ames try to get the crowd to lynch Silent anyway, but more lawmen show up and save the day. Bud and Betty are able to marry and live happily ever after.

Coming a year after “Hell’s Hinges,” and “The Return of Draw Egan” this movie seems comparably formulaic and unimaginative. I don’t know, maybe I’ve just seen too many of these William Hart movies to appreciate it, but it seems to me like pretty much everything in this has been done before. In fact, the subplot about capturing Betty and wooing her reminded me a lot of “Shark Monroe,” which was to come out the next year and did a much better job of dealing with the awkwardness and sexual tension of that situation. We do get the interesting situation of Hart as an anti-hero bandit with a pure heart and a desire for revenge, but this is mostly window-dressing for a pretty generic Western storyline. Finally, I’m not sure why his character (or the title)  is called “Silent,” unless it was just to call attention to the fact that this is a silent movie. He has as much dialogue as anyone, and actually the one person who keeps silence is the preacher, who refuses to divulge information under extreme duress.