Unusual provenance explains this re-edited, re-titled version of Charlie Chaplin’s “A Night Out,” but it was once widely seen by audiences who had little access to new material from Chaplin during his long dry spells in the 1920s. 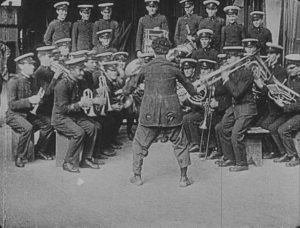 The movie begins by showing Charlie as a band conductor, with a trombonist who frequently hits him when his back(side) is turned. Then we cut to Charlie in his hotel, flirting with a woman behind a veil, apparently a bit drunk, impressed by her backside and horrified when her face is revealed. Next is a scene showing Charlie, evidently in a restaurant, using a decorative fountain for his evening ablutions. At the very end of this sequence, Bud Jamison appears to chastise him. Next is a scene of Charlie preparing for bed in a hotel room, tossing clothes out the window and nearly sleeping on the floor himself. Edna Purviance plays with a dog across the hall and this hides under Charlie’s bed. Edna follows it and Charlie finds a girl under his bed, only to find moments later, her husband (Bud Jamison again) at the door. Soon, Ben Turpin shows up with a bone to pick with Charlie as well. The ensuing fight ends with Charlie passing out in his bathtub.

Some unscrupulous type seems to have gotten ahold of discarded takes from “A Night Out” and edited it into a short movie. Again, since Chaplin wasn’t releasing much at the time (certainly not as much as the public wanted), it was easy to get a “new” Chaplin into distribution, even without his approval. It lives on in the guise of a Charlie Chaplin movie, although better prints of the originals have been released.

Director: Unknown (though Chaplin presumably directed all the footage)