Having survived 15 death-defying situations in the previous year’s serial “The Master Mystery,” Harry Houdini is back in this feature-length adventure thriller which bills itself a “melodrama.”

Houdini stars as Harry Harper, a treasure-seeker with a heart of gold who hopes to recover a shipwreck full of diamonds using his newly invented submarine in order to take care of local waifs who sell newspapers. Wilton Taylor and Edwin Brady are greedy treasure hunters who are gunning for the same treasure, and they read about Harry’s plans in the newspaper. Lila Lee is Beverly West, the horseback riding love interest who happens to be related to the bad guys and also possesses the map to the wreck in question, sent by her father in a plea for his rescue from island natives who plan to sacrifice him unless she returns a skull-shaped pearl he sent her earlier. Got all that?

Beverly convinces Harry to help her get to the island, but her relatives stage a fire to get her to recover the pearl and map from its hiding place, which they’ve paid some thugs to snatch from her, but she’s too fast for them and gets to a horse in time to begin a thrilling chase with their automobile. Harry arrives in time to save her from being hit by a train and molested by the goons, and they pretend that the goods were stolen to throw off suspicion, but she winds up taken by the bad guys in their ship while Harry pursues in his submarine (some footage is missing here, but there seem to be a few daring escapes in the interval).

Harry rescues Beverly by fighting off the entire crew of the ship, and the two of them swim back to his submerged submarine, dodging bullets as they go. They complete the journey to the island underwater, flirting shyly as they do so, to the annoyance of Harry’s engineer. We see a surprisingly large cast of African Americans dressed as “natives” of Terror Island as they prepare to sacrifice the dad on their feast day. They have retrieved the safe from the shipwreck and accept the pearl from the baddies as a sign from the gods. Harry has to rescue Beverly from a lustful native ala “Gus” from “The Birth of a Nation,” resulting in a thrilling underwater battle after they both topple off a cliff.

The natives accept the pearl and give it back to the idol of their squirrel-like god, but they decide they’d still like to have a sacrifice, choosing Beverly instead of the old man. Harry is put into an odd sort of neck-stock and hung from a tree. He escapes by using his feet to untie the rope. Beverly is put into the safe and thrown into the sea and the bad guys put dynamite next to it using diving suits, thinking that is where the treasure is hidden. Harry swims out to rescue her, cracking the combination underwater. The baddies blow up the dynamite and Harry realizes that the diamonds must be in the strong box in the safe, so he swims back to battle one of their divers, beating him by pulling out his air line and swimming back once again with the  box. 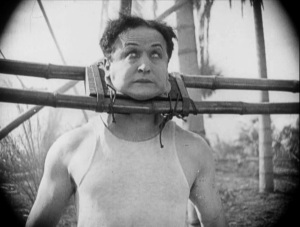 The bad guys decide that if they kidnap the old man, Harry will surely surrender at last, but they run afoul of the natives when some of their thugs try to rape a native girl. Harry stops the mass execution of the whites by emerging from the sea with Beverly and pretending to have been resurrected by the gods. This gives the hoods an opportunity to seize the submarine and try to retrieve the diamonds, causing it to flood in the process. Harry and his engineer fight them as water rushes in, eventually managing to recover the situation, and allowing Harry to return to civilization with the treasure and give picnics for lots of children and shyly kiss Beverly.

As this summary demonstrates, this is a non-stop action movie, with little time for subtlety of plot or acting. It seems like this was a good choice, because the star has very limited (at best) acting talents. Houdini looks awkward in pretty much any scene where he isn’t fighting or escaping, but luckily there’s a minimum of those. The action scenes are adequate, but nothing special, and sometimes the fast pace of the film works against its being effectively suspenseful. For example, the chase between the horse and the car with the train bearing down is over so quickly you barely register the danger before it’s been resolved. Good cross-cutting could have made this a much more thrilling scene, but the director just seems to want to move on to the next excitement as quickly as possible.

A hundred years later, movies like this one trigger considerations of the racial message embedded in them. Unlike “The Birth of a Nation,” the natives here were played by black folks (though not pacific islanders) rather than white men in blackface, but nevertheless they are portrayed as ignorant, superstitious, lustful, and violent. One has to wonder how the actors felt about this, and whether they or their families went to see the movie when it was released, or if they regarded it as being intended for white audiences, and not for them? Certainly it’s hard to imagine that they thought the roles were worthy of their talents, not just something they did for a paycheck and moved on.