This short by Mack Sennett was produced for Biograph before he struck out on his own, and it seems he tried (or was told) to imitate D.W. Griffith, because there’s very little of the wacky chaos of a Keystone production here. We do get Griffithian conventions like contrasting scenes intercut to demonstrate opposites, and a race to the rescue at the end. 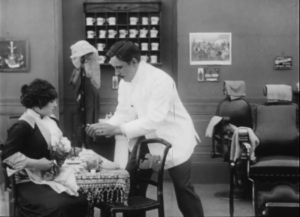 The movie begins by introducing the named character, a woman (Vivian Prescott) who works in a barber shop, as she prepares for work. The intertitles tell us, however, that this is a romance, which will prove “faint heart never won fair lady.” That situation becomes more clear, however, when we meet her coworker, the barber (Sennett). He immediately pulls out a ring and proposes to her, but she spurns him. As (male) customers come in for manicures and shaves, we see that the manicurist enjoys the intimacy of her work, and is flirtatious with the customers, which drives the barber to distraction, and makes him negligent of his own work (and a bit dangerous, with a razor in his hand). One customer in particular (Eddie Dillon) quickly shows interest in her and becomes a rival for her affections. When lunch break comes along, the barber and the manicurist prepare to go out together, but the rival shows up in a car and takes her off with him. The lunches are cut together – Vivian and Eddie are eating in refinement and luxury, while Mack is in a cheap diner, with a tough steak and a rude waitress. At the end of the day, the rival shows up in another car (possibly a taxi) but this time Mack, desperate, leaps onto the back of the vehicle. As they ride out into the country, Mack breaks through the rear window and beats up his rival, tossing him out of the car. He once again proposes, and the manicure lady, overcome by his passionate determination, finally consents. 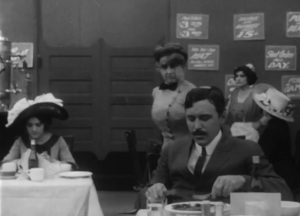 Most of the humor of this film comes from Sennett’s distraction while the manicurist flirts. He tugs on beards, forgets to finish what he has started, and generally seems like a menace with his blade. One older customer is dragged off by the ear by his jealous wife (Kate Bruce) who refuses to pay for the shave Sennett forgot to give. Another grows tired of waiting and grabs the razor to shave himself (though he pays). The other laugh I got out of it was the final fight scene, mostly because it was so sudden and surprising. Mostly, though, this is a rather broadly-played romantic drama, and though we feel sorry for the barber, he never really comes across as the better or more deserving of love. Watching it made me think of the strange physical intimacy of this now largely lost form of grooming – few men today go to barbers for shaves and manicures. Almost the only time I am this close to a stranger is when I go to the dentist. For a society as repressed as (we think of) the early twentieth century, it’s interesting that this convention existed. It seems like early film makers, looking for places where romance could happen in nine or ten minutes, found it useful as well.