This early collaboration between D.W. Griffith and Mack Sennett looks like a primitive version of the latter’s later riotous slapstick comedies. It uses themes (like the mass chase) that have shown up in earlier film comedies from both France and the USA. 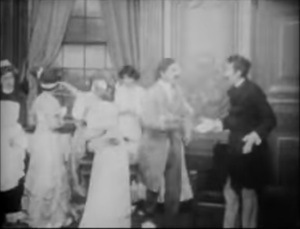 The movie begins in a middle-class home, where a man (Henry Solter) is helping several women (one is Florence Lawrence, AKA “The Biograph Girl”) to install a new pole for the curtains. However, he is either not tall enough or otherwise unable to manage it. In walks Sennett, in a ridiculous mustache and tight-fitting clothes that emphasize his lanky frame. He makes an attempt, but slips and falls, bending the pole and then breaking it when he tries to straighten it out. Deeply apologetic, he goes out to procure another for them. Along the way, he encounters an acquaintance, who invites him into a bar for a drink. Thus fortified, he makes his way to a store and buys a very long curtain rod. Almost immediately, he starts knocking people over and whacking them with the pole. When he tries hiding out in the bar, he causes further chaos there, and soon a gang of different types of people, from little old ladies to street ruffians, is chasing him. He stops and gets a taxi, but the added speed only makes the pole more dangerous, and soon he is literally causing riots in the street with his passage. He does manage to elude the mob, in part because his horse starts running backward (!), and eventually makes it back to the home of his friends, who apparently were able to get another curtain rod during his long absence, and have started a dinner party. Driven mad by his experience and failure to help out, Sennett starts eating the curtain rod.

This sort of comes across as a “proof of concept” experiment, with Griffith trying to show what he can accomplish. One part I don’t entirely understand is where a fellow with a walking stick causes the horse to start running backward. The effect is achieve by reversing the film, and Griffith has the mob run up right afterward and fall down, but in fact what the actors did was get up and “run” backwards off the screen in order to get the effect, and it looks very unnatural. Sennett chews the scenery and hams constantly, but he’s having so much fun with it that it’s hard to mind. The riot scenes are remarkable, with baby carriages and innocent couples being knocked over, pushed, and trampled. I wouldn’t be surprised if a few actors were injured. The film was shot in Fort Lee, New Jersey, and takes advantage of the location to show quite a number of its streets.