Erich von Stroheim’s first directorial effort is a tale of infidelity set in a small European village. This is the feature film that “made him” as a director, establishing a reputation for brilliance, going over-budget, and being domineering on the set. 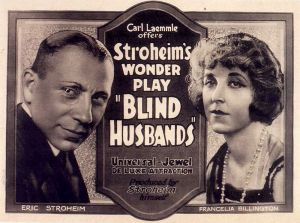 The picture takes place in a small Alpine village, and begins with a dedication to “Sepp” a mountain guide who happens to share a name with the guide character (played by Gibson Gowland) in the movie. Sepp receives word that his friend Dr. Robert Armstrong (Sam De Grasse) is returning to the village, which results in an emotional flashback in which we learn that Dr. Armstrong saved Sepp’s life on the mountain and that Sepp pledged his undying loyalty to him in gratitude. We see the arrival of the doctor and his young wife (Francelia Billington) in a carriage, the doctor consistently with his nose buried in a book. This opens up opportunities for an Austrian Lieutenant (played in highly Prussian style by von Stroheim himself) to awkwardly flirt with her, though she shows no interest in him. As the film progresses, this theme continues, with the Lieutenant flirting with, and at times annoying, Mrs. Armstrong while her husband is oblivious to her concerns. Meanwhile, their relationship is contrasted with that of two young Honeymooners (the girl is played by Valerie Germonprez, von Stroheim’s future wife), who are only interested in one another to the point of obliviousness to all else. Mrs. Armstrong clearly longs for that kind of attention, and is ashamed to be seen in public with a man who ignores her. The Lieutenant quickly seduces and abandons a waitress (Fay Holderness) at their inn, pausing only momentarily in his pursuit of Mrs. Armstrong, giving us a clear picture of what would happen to her if she were to submit to him. 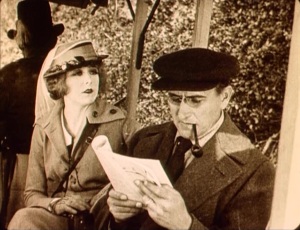 An important sub-plot is established when a group of tourists announces their intention to climb the North face of the mountain, which no one has yet succeeded in doing. The doctor and Sepp, both highly experienced climbers, advise against it, warning “don’t try to break records” and that the mountain is more powerful than human ambitions. Of course, the three men ignore their warnings and are trapped on the mountainside, requiring rescue and medical attention. This leaves Mrs. Armstrong and the Lieutenant alone together for even longer periods of time, and she starts to show some signs of weakening, although it isn’t entirely clear whether she’s actually attracted, just so hard up for attention that she’s responding to anyone who shows it to her, or frankly afraid to resist such a violent personality. Finally, they are alone in her bedroom, him ostensibly hiding from the jealous waitress, and she agrees that she will “go away” with him before sending him out of the room.

Sepp has been aware of the problems and tries to gently advise his friend to be a better husband, but mostly he starts to position himself between the Lieutenant and Mrs. Armstrong. Armstrong decides to climb the safer side of the mountain before going home, and takes all three of the others with him (Mrs. Armstrong is just going as far as the “Pinnacle Hut,” evidently a small hotel further up the slope). Again, there are opportunities for him to be neglectful, the Lieutenant to be aggressive, and Sepp to intervene. Finally, the doctor and the Lieutenant ascend alone to the very top of the mountain. It becomes clear that the Lieutenant has over-stated his mountaineering skills and is highly dependent upon Armstrong’s help to keep going. When they reach the Pinnacle, they achieve a kind of transcendent state of purity, and then the doctor finds a note from his wife to the Lieutenant. Before he can read it fully, it is blown away by the wind, but the doctor interrogates the Lieutenant while holding him by the throat. The Lieutenant confirms that she has agreed to go away with him and the doctor is devastated, momentarily turning his back in his grief. the Lieutenant pulls out a knife but at the last moment, perhaps realizing that he has no hope to descend without help, he pulls back. The doctor sees the knife, takes it, and severs the rope between them.

Meanwhile, Mrs. Armstrong has become worried and urges Sepp to begin a rescue expedition with several Austrian soldiers who recently arrived. They climb up and see the two men separated, in apparently dire straits. However, Dr. Armstrong has climbed down partway to recover the note, and in it he learns that his wife had refused the Lieutenant, that she had agreed under duress, and that she still loves her husband. Exultant, he returns to lower ground with the soldiers. The Lieutenant is trapped at the Pinnacle, afraid to try climbing down. The Austrians are heading towards him slowly, but he panics at the sight of a vulture. Trying to back away, he loses his balance and takes the fast way down the side of the mountain. The husband and wife reconcile, and in the carriage on the way out, he shyly takes her hand and gazes into her eyes, no longer blind to her love or his own.

I’ve seen this movie before, but as I watched it this time, I thought a lot about how far cinema had (and hadn’t) come by 1919. In that context, I kept comparing it in my memory to “The Cheat,” Cecil B. DeMille’s 1915 drama about infidelity. They have similar plots: both are about an evil “other man” trying to use force and deception to seduce another man’s pure and virtuous (if a bit silly) wife. “The Cheat” had rather good camerawork for its day, especially in terms of lighting, and used two-shots and closer shots to give the audience more intimacy with its actors. But compared to “Blind Husbands,” it is a static, almost claustrophobically close film. “Blind Husbands” is much more tightly edited, with more inter-cutting within scenes and multiple camera angles, good use of close-ups, and even uses the village and the mountain as visual opportunities, instead of restricting itself to stage-like sets, even showing verticality in some shots during the climbing sequences. 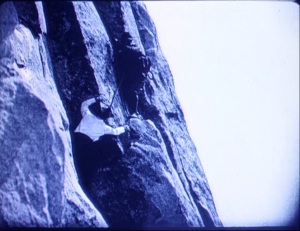 The spiritual transcendence of mountains and mountain climbing her prefigures the “Bergfilm” genre that would soon become important in the German film industry. The most notable figure to come out of that genre would be Leni Riefenstahl, later to produce documentaries for Hitler. There’s nothing inherently Nazi about the Bergfilm, but in celebrating the majesty of the German countryside in highly non-rational terms, it was easily adaptable to their purposes. Von Stroheim, however, working before the genre was established, makes his “Germanic” character into a villain of the sort American audiences would recognize from World War I anti-German propaganda films like “The Little American” and “Hearts of the World,” in which he had played a sadistic German officer so evocatively that he reputedly had to sneak out of a screening to avoid being attacked by the angry audience. The mountain, for von Stroheim, is greater than the German, a vessel of God’s wrath against all forms of hubris, and not representative of German power over others.

This is one of the most “modern” movies I’ve seen in the course of this project, and I do think it has a place in the canon of “important movies” in history, although I’m not sure I’d rate it among the very best work of the silent era. Von Stroheim’s interest in cosmic justice and morality seems to overwhelm the human emotional side of his story, something DeMille (or later, Lubitsch) would have handled with more sensitivity. Some of the ambiguity about Mrs. Armstrong’s motivations may be intentional, to create a surprise ending, but to some degree I get the sense that the actress just wasn’t sure what he wanted from her, and so played it different ways in different scenes. Sam De Grasse is mostly very stony throughout, but his sudden violence at the end looks like hamming by comparison and von Stroheim is pretty much always over-acting (though this would be true throughout his career and even off-screen, if we are to believe the stories about him). Many of the characters are there as archetypes, or to represent a concept rather than behave like a person. It works to a degree, because the movie is consistent with their roles, but another director might have brought more humanity and less bombast to the picture.