Released just one year after “A Trip to the Moon,” this extended adventure story from Georges Méliès was at least equally as ambitious and well-executed, although it’s not so well remembered today. Essentially a fairy tale-quest story, the use of a witch and her demons as antagonists fits it more or less into my October history of horror.

The movie begins on a proscenium-style set dressed as a medieval court. Lords and ladies arrange themselves around the throne. Méliès himself appears as “Prince Bel-Azor,” who is betrothed to Princess Azurine (Marguerite Thévenard). Various fairies give the princess wedding gifts, led by the fairy godmother, Aurora (Bluette Bernon). Suddenly a witch runs in, offended at not having been invited. When she is admonished by the prince, she turns into flame and disappears. The next sequence shows the princess in her bedchamber, assisted in undressing for bed by several ladies-in-waiting. Once they leave, the witch, assisted by several green demons, seizes the princess from her bed and puts her into a “chariot of fire.” She is unable to resist, although the prince rushes in at the last moment to be confronted by a fire-wielding demon. He and the court rush out to a high tower and watch the chariot of fire and its retinue rushing across the sky. The prince vows to pursue. 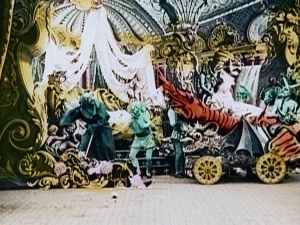 A party of felknights is shown arming themselves in the armory, along with the prince, but the witch appears to him and warns him of the fruitlessness of his efforts. She shows him an illusion of her homeland, a barren waste with an inaccessible tower where the princess will be held captive, now in the clutches of both red and green demons. The witch leaps on a broom and flies away, just before the fairy Aurora appears to present him with a magic helmet and sword. We now see the prince and his companions boarding a ship to sail to the witch’s island. After it sets sail the witch casts a spell to cause a storm. We see a miniature ship under a painted sky, water splashing heavily until the ship sinks. 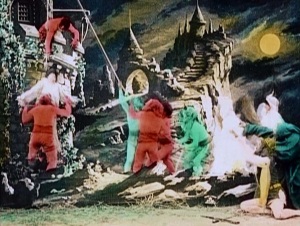 The next sequences of the film takes place underwater, in a land as imaginary (and imaginative) as the moon from “Trip to the Moon.” The illusion is strengthened because Méliès places an aquarium full of swimming fish before his camera, making them seem as large as the actors. Aurora revives the sunken sailors (and presumably uses magic so they can breathe), and they follow her past a flailing octopus and into a grotto. The prince gets to ride a swordfish and the other knights get a shell chariot drawn by large fish. We see several painted tableaux representing their journey to the court of Neptune. Water nymphs attend Neptune as he passes judgment on the Prince. Neptune summons a whale and orders the adventurers to enter its mouth. They seem afraid, but each goes in and is swallowed, one by one. The next scene shows them disembarking from its mouth at the shore of the witch’s island – Neptune has come through for them after all!

On the witch’s island, Aurora directs them to a cave mouth that leads them to the edge of the tower, although a huge moat separates the prince from his objective. He dives into the water, intending to swim across and the witch appears, prevented from mischief by the intervention of Aurora. The prince arrives and batters at the door of the tower with a large rock and a board. Once he gains access, the witch sends two of her fire demons after him. With the castle ablaze and collapsing, the prince carries the princess to safety. She joins the rest of the party and the prince remains behind to finish his battle with the witch. Aurora provides a barrel and the prince stuffs the witch into it and hurls her over the cliff into the ocean. We see her flail about, drowning in the water. A scene shows the triumphant return of the prince and his bride at the castle, and then we see them wed in the court from the beginning, attended by fairies and dancers.

This is perhaps the movie most clearly tying Méliès to the tradition of féerie, a French theater genre which emphasized fantasy and magic. It isn’t a super-scary film, although the witch and her demons may have frightened some of the smaller children in the audience. Any fairy tale has its scary parts (that’s what makes it work when the hero wins), and this gives us the abduction, the dismal scene of the witch’s island, and the storm to work with. It seems that all is lost when the boat goes down, but Méliès surprises us with his creative underwater sequences. Prince Bel-Azor is certainly lucky to have the fairy Aurora on his side at this point! These scenes probably required the most elaborate effects of the movie, though there was nothing here beyond what he had done before in trick films or “A Trip to the Moon,” using with stage machinery, rolling panoramas, miniature models, pyrotechnics, substitution splices, superimpositions, and dissolves Although the witch and the demons sometimes disappear in clouds of smoke, they can also reappear, making them more dangerous threats than the Selenites of the earlier film. I particularly enjoyed the real fish (and sometimes lobsters) in the foreground, and the panted backdrops for the underwater journey were also a delight. A good portion of the surviving print is in hand-painted color, so you can distinguish the demons as well as enjoy the fantasy more effectively. One of the better movies of Méliès distinguished career.